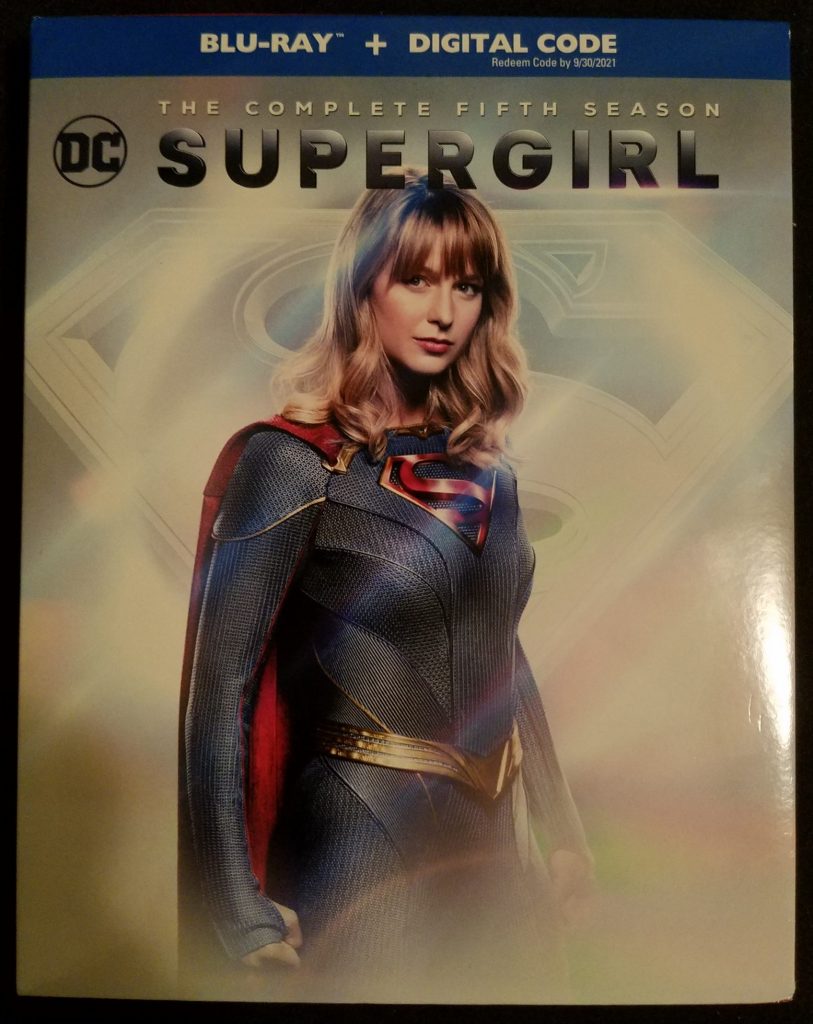 It’s a very different world in Supergirl Season 5 – literally. Thanks to “Crisis on Infinite Earths”, Kara’s Earth has merged with Earth-1 and become Earth-Prime, which has obviously caused some changes. Lex Luthor is a good guy (say what?), James Olsen has left National City, and Supergirl has a brand new suit! Relive all the dramatic changes in Supergirl: The Complete Fifth Season, out on Blu-ray and DVD September 8.

Warner Bros. Home Entertainment provided me with a free copy of the Supergirl: The Complete Fifth Season Blu-ray I reviewed in this blog post. The opinions I share are my own.

In season five, Supergirl faces threats, both new and ancient. National City becomes enthralled with addictive virtual reality technologies created by CatCo’s charming-but-secretive new owner, Andrea Rojas. As Kara uses the power of the press to try to expose this danger, she must contend with challenges put up by rival reporter William Dey, renegade Martian Malefic J’onzz, a shadowy organization called Leviathan, and the shocking return of Lex Luthor who, in addition to his plot for world domination, seeks to claim the soul of Supergirl’s best friend (and his sister) Lena. With humanity choosing to lose itself in technology, can Supergirl save the world yet again?

Supergirl Season 5 continued to be accurately on point, seamlessly blending real-life, timely issues with the fictionalized world of aliens and superpowers. In a shortened season due to Covid-19, the show addressed humanity’s over-reliance on technology, the dangers of sensationalist and tabloid journalism, and the injustice often present in our country’s justice system, in addition to the more character-oriented stories like family dynamics and strained friendships.

One of the biggest overarching plots of Supergirl Season 5 was Lena dealing with learning the truth – that best friend Kara is actually Supergirl, and virtually everyone she knows was hiding that knowledge from her. Both Katie McGrath (Lena) and Melissa Benoist (Kara) had expressed their hope at SDCC 2019 that this situation would not turn Lena evil, and thankfully it looks as though their wish has been granted. After a season at odds, Kara and Lena seemed to reconcile in the season finale.

Season 5 also contained the 100th episode of Supergirl, which featured Mxyzptlk returning to offer to help Kara repair her relationship with Lena in “It’s a Super Life”. We said goodbye to James Olsen, who quit CatCo and moved back to his hometown to run the local newspaper – but we were introduced to his sister Kelly. “Reality Bytes” centered around Dreamer and transphobic violence – a major problem in the trans community.

But you can’t discuss this season without addressing the elephant in the room – namely, the fusion of Earths at the end of “Crisis on Infinite Earths”. The biggest crossover event in DCTV history, this epic five-night event revolved around the literal destruction of the multiverse, with only a few characters left to save the day. “Crisis” featured cameos from various incarnations of previous DC properties as well as incorporating characters from every major DCTV show – including Black Lightning. 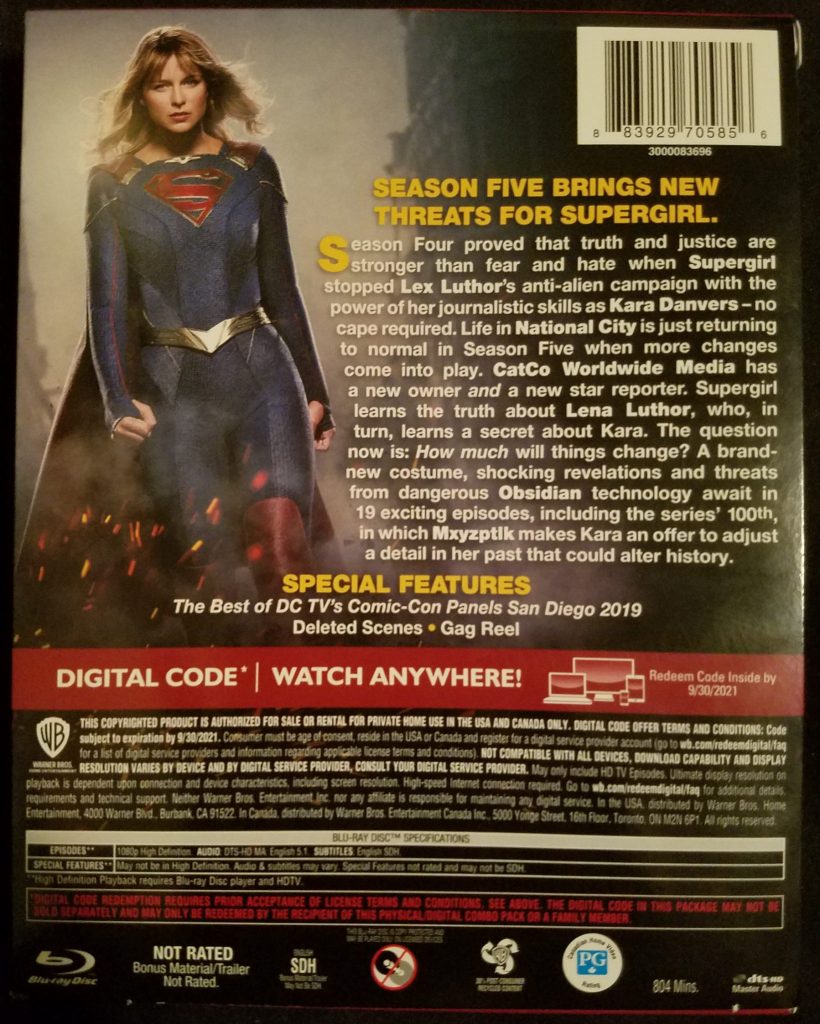 Now, everyone knows that the main reason to buy a Blu-ray, in this age of endless streaming services, is the special features. Both the DVD and Blu-ray releases of Supergirl: The Complete Fifth Season include deleted scenes – most of the 19 episodes of Supergirl Season 5 have at least one deleted scene – a gag reel, and a 51-minute compilation of highlights from DCTV’s 2019 San Diego Comic-Con panels (Arrow, The Flash, Black Lightning, Batwoman, and Supergirl).

The Blu-ray release includes a bonus disc that contains all five episodes of “Crisis” and six behind-the-scenes featurettes about the making of the crossover event. So unlike previous releases, the entire crossover is not featured on the DVD. The Supergirl “Crisis” episode, which kicked off the event, is included on Disc Two as well as the bonus disc.

These are the same special features that were included in The Flash: The Complete Sixth Season Blu-ray, and I assume on all of the other Arrowverse shows as well.

I greatly enjoyed the featurettes on the Blu-ray bonus disc, but those who purchase the DVD release may find the special features lacking. As much as I enjoy a good gag reel and deleted scenes (you all know I advocate for them on all home video releases), I was disappointed that there wasn’t much else in the way of bonus content. “The Best of DC TV’s Comic-Con Panels San Diego 2019” was interesting and featured some pretty good highlights, but as someone who basically only follows Supergirl, I would have liked to have at least the full Supergirl panel as a bonus feature.

With the Supergirl: The Complete Fifth Season Blu-ray, you can watch all 19 episodes (plus the bonus crossover episodes!) in glorious 1080p HD (So crisp! So clear!) and DTS-HD Master Audio in English. (Still only English subtitles.) The Blu-ray also comes with a redeem code for a digital copy (US only), so you can take your favorite episodes on the go with you.

You can buy Supergirl Season 5 on DVD and Blu-ray on September 8, 2020. The DVD release includes four discs featuring all 19 episodes (including the first hour of “Crisis on Infinite Earths”), deleted scenes, a gag reel, and the best-of SDCC 2019 compilation. It retails for $39.99 SRP ($44.98 in Canada).

The Blu-ray release includes everything from the DVD release, as well as a special bonus disc containing all five “Crisis” hours and six featurettes. It retails for $44.98 SRP ($49.99 in Canada).

Supergirl has been renewed for a sixth season, but due to Covid-19 (and star Benoist’s pregnancy) it has been pushed back to a summer 2021 release. 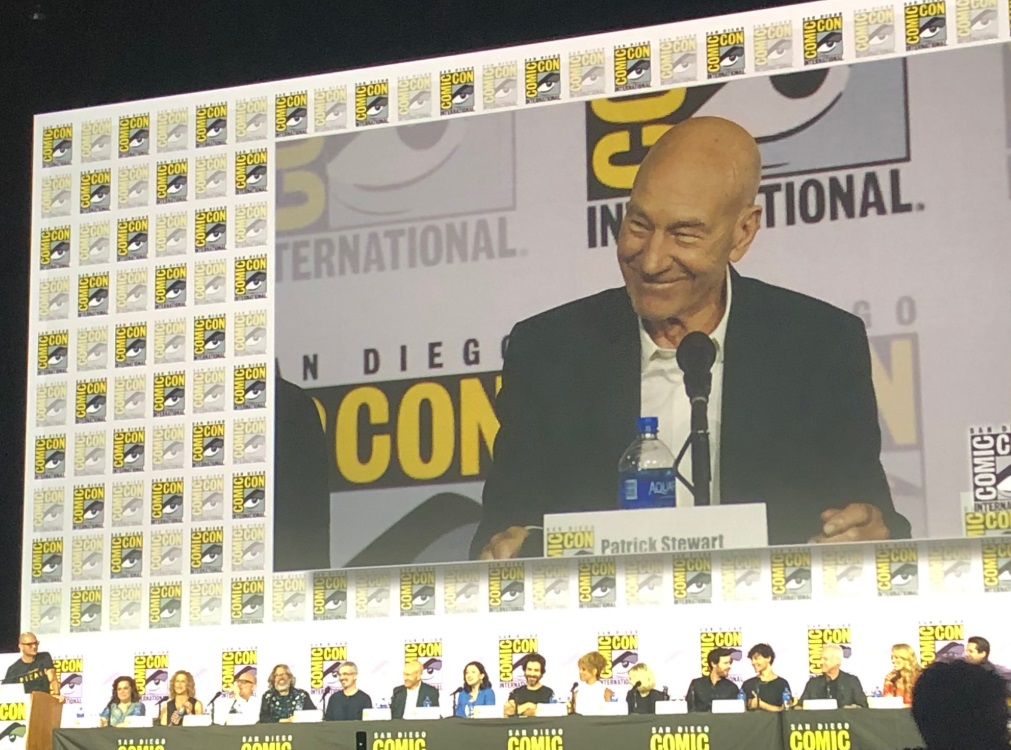 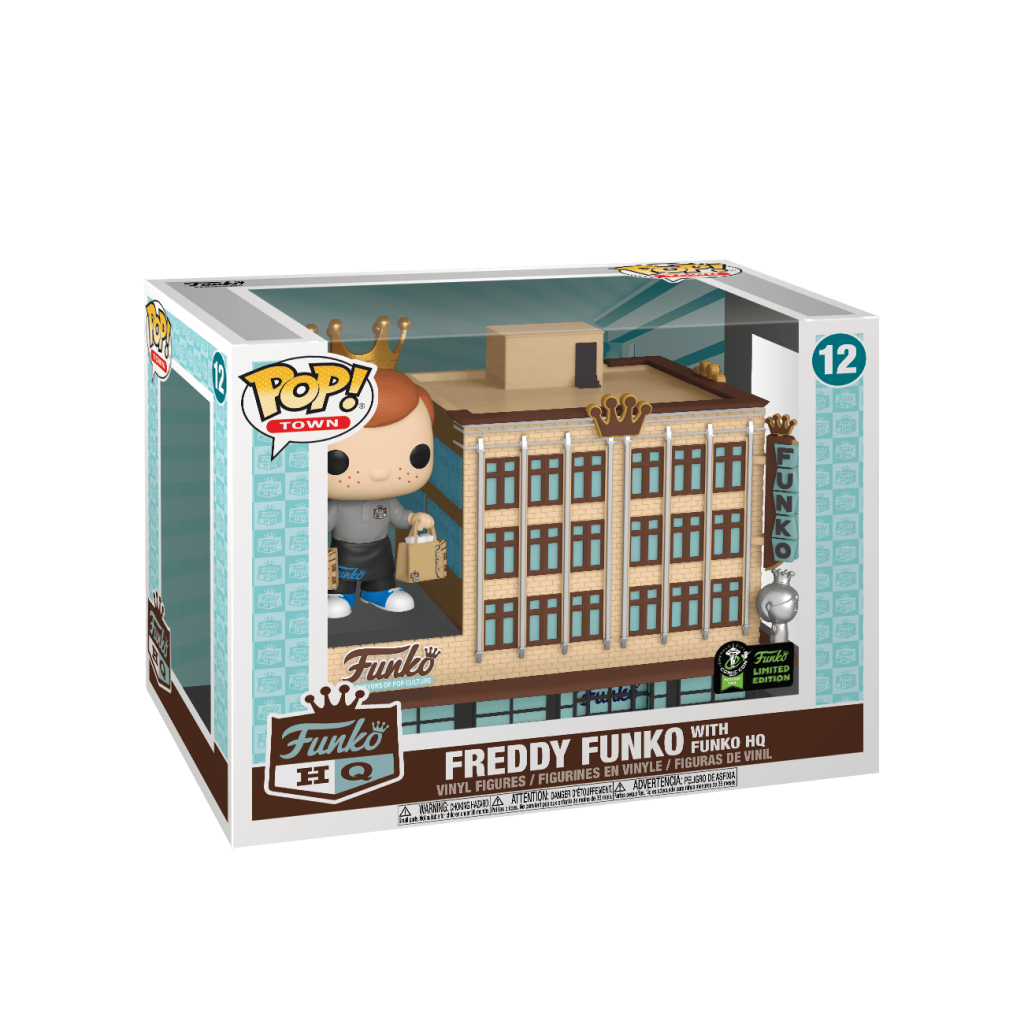