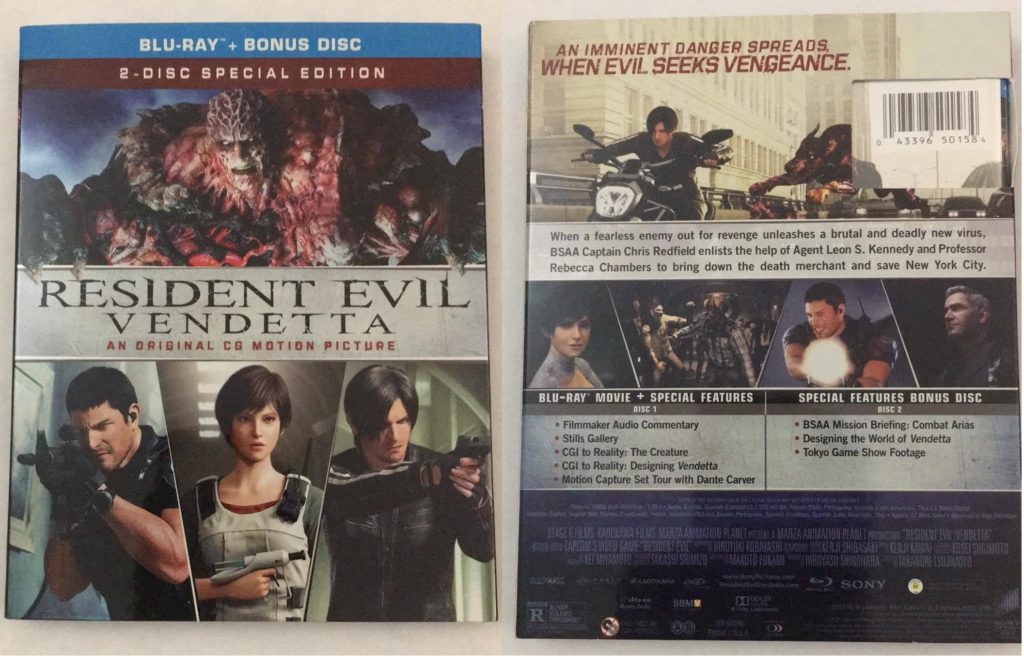 The third CG installment in the Resident Evil animated franchise strikes a fine balance between horror and explosive action as it brings the series’ veterans to the forefront in Resident Evil: Vendetta.

I was provided a Blu-ray copy of Resident Evil: Vendetta by Sony Pictures Home Entertainment. The opinions are my own. Warning! Spoilers ahead!

I have been looking forward to watching the newest installment since the announcement. Resident Evil: Vendetta brings Chris Redfield and Leon Keneddy (two major male characters from the franchise) and teams them up with Rebecca Chambers. We haven’t seen Rebecca since the Resident Evil 0 and 1 games. She did, however, appear in Biohazard: The Stage. It is awesome to see her again.

The story of Resident Evil: Vendetta is set between R.E. 6 and 7. Someone has betrayed Leon’s team and Chris tries to take down Glenn Arias who is described as a merchant of death. The start of the film has some horror tones and the setting is reminiscent of the mansion that will feel familiar for a lot of fans.

Leon and Chris seem to have switched roles after R.E 6. Chris tried to drink his guilt away during R.E 6 and in Vendetta it’s Leon who has a drinking problem. Other than that, those two were the same characters I knew from the beginning. Leon has always shown a bit of reluctance when forced into bioterrorism-induced situations while Chris is all about squashing bioterrorism wherever he can.

Coming to the antagonist, while Glenn Arias is a threat to the main characters I was unable to take him seriously. While Albert Wesker and other villains from the games have been over-the-top, they never came across as crazy. Glenn certainly has a few screws loose and instead of his craziness making him scary, he came across as a joke. His backstory didn’t help either. Even his two henchmen weren’t fleshed out. Maybe we’ll see more of Maria in the future? Also, is Nadia really a lesbian?

The action sequences are amazing in this film. Kudos to action director Kensuke Sonomura. And while all of them are outside human limits, they still look cool because they involve Chris and Leon. My only complaint is that during Leon’s Ducati-action-scene, he probably killed at least two innocent people. I get that he was probably looking at the bigger picture but seeing Leon not even trying to find a better way to beat his opponents, and possibly killing at least two civilians, felt out of character.

The story of Vendetta is simple enough. Glenn Arias creates a new virus that allows a person to make zombies differentiate between friends and enemies. The new virus is what brings Rebecca into the story as a young professor trying to find a cure. She’s smart and I liked that the movie made sure you knew that. Rebecca also ended up making sense of Glenn’s crazy plan.

Now, I get that there are fans who think that Rebecca ended up being the damsel in distress during Vendetta when she’s kidnapped by Glenn. But I completely understand why writer Makoto Fukami did so. Fans need to understand that while Rebecca was the first person to know about the zombie-creating virus in R.E 0 she was never a fighter. Yes, she is able to hold her own in the field but her interest lies in science. She would rather use her brains to fight bioterrorism than defeat villains with guns.

That’s why her character decided to become a professor (first shown in Biohazard: The Stage). That’s why you can’t expect her to try and defeat Glenn in hand-to-hand combat. She did try and punch him (and it was great) but I never expected her to have any action sequences in Vendetta.

That’s why I appreciate how even though Rebecca hasn’t been in the field in years, Vendetta showed that she still remembers some of her training. Rebecca was in no way your typical damsel in distress in the film. She took down two zombies all by herself (without actual weapons) after coming back from the brink of death due to being infected, no less. Was she more or less sidelined during the second half of the film? Yes, I won’t deny it. But then again seeing her dodging zombie-dogs and fighting a giant mutated monster by herself would have felt out of character.

She isn’t Jill, Claire, or Sheva with years of combat training. Rebecca is more comfortable using her brain power. She can take down enemies when needed but don’t expect her to go in guns blazing. That’s not her character.

Also, Erin Cahill did a great job with Rebecca Chambers. Not only did the actress do motion capture work for the character but she also voiced Rebecca. Erin really brought the innocent but tough look to Rebecca. Kevin Dorman and Matthew Mercer voiced Chris and Leon respectively. The motion capture work for the two main male heroes was done by Reuben Langdon and Jason Faunt.

The CG animation looks great on Blu-ray. The video features a resolution of 1080p with an aspect ratio of 1.85:1. The sound is DTS-HD Master Audio 5.1, offering an enjoyable experience during the explosions and fast-paced action sequences.

The Blu-ray set includes two discs. The first disc has the film along with some fun special features which include audio commentary from the filmmaker, stills gallery, motion capture set tour with Dante Carver (he did the motion capture for D.C), and two featurettes which are “CGI to Reality: The Creature” and “CGI to Reality: Designing Vendetta.” The second disc includes the Tokyo Game Show Footage and two featurettes which are “Designing the World of Vendetta” and “BSAA Mission Briefing: Combat Arias.”

I enjoyed all of the special features even though most of them were only a couple of minutes long. My favorite was the stills gallery (with 30 sketches and designs) and the featurettes that showed how Vendetta was made. I’m a big fan of concept art showing characters and settings and there was a lot of that in the special features. The Japanese audio commentary is by Director Takanori Tsujimoto, Executive Producer Takashi Shimizu, and Writer Makoto Fukami

Resident Evil: Vendetta is an enjoyable installment in the popular franchise. And now I can’t wait for the next one! Fingers crossed we get an all-female cast!

Resident Evil: Vendetta will be available on DVD, Blu-ray, and 4K Ultra HD on July 18, 2017. It is currently available on Digital HD.

Have you watched Resident Evil: Vendetta yet? What did you think? Let us know.