This year’s SDCC was the queerest ever with a massive amount of LGBTQ news dropped practically every day of the con.  Whether it was character sexuality revelations, new LGBTQ+ inclusive characters, or content creators expressing their desires for sexuality exploration, SDCC was practically shooting rainbows from the panel rooms every day. 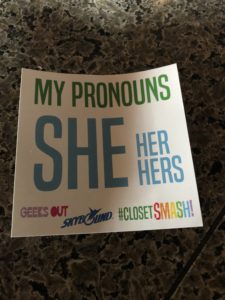 I’ve been attending San Diego Comic-Con since 2011 and, while I know there are always pockets of LGBTQ news and events here are there, I’ve never felt that it was so overwhelmingly present as I did this year.  But hey, the kids these days have dubbed 2018 as “20GayTeen” and SDCC is just helping continue that awesome trend.  Bring on the rainbows!

While Thursday didn’t have “news” exactly, it did have the Closet SMASH party hosted by Skybound and Geeks Out.  This pro LGBTQ+ friendly party was a welcome start to the con and drove the point home that Skybound, San Diego Comic-Con, and comics in general has a place for our community.

They even passed out pronoun stickers, which was awesome.  This is the only event at any convention that I’ve seen do this, so kudos to them.

The biggest news of the day was Voltron.  One of the biggest franchises in geekdom at the moment just revealed that one of its primary protagonists is gay.  Shiro is gay, folks!  BLESS.

Fandom was quick to respond: 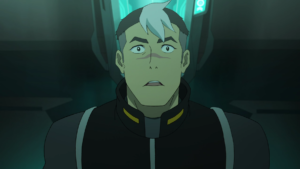 I’m not personally in the Voltron fandom, but I recognize how huge this is. It makes me want to catch up with the show now more than ever.  I’ve seen the first season and apparently it’s already on its seventh? Sounds like an epic marathon is in my future.  How exciting!

Voltron wasn’t the only LGBTQ+ news to pop up on Friday.  Star Trek Discovery also made waves when Wilson Cruz, who plays Doctor Culber, was included on the main panel.  If you recall, his character died last year.  Culber popped up a couple of times after his death through the magic of Star Trek science  (something something spores and science stuff), but generally he’s dead.

I was personally pretty upset by this and I’m tired of the Bury Your Gays trope.  But Anthony Rapp insisted this wasn’t like that and fans should have faith in the creative team. I should have trusted him, but I’ve been so abused by media that I’m quick to ditch things that play on negative tropes.  I’ll be catching up on the last few episodes I missed when I rage quit and watching next season because maybe this show deserves some more trust than I’ve been giving it.

Saturday had the most LGBTQ+ news drops, but the Supergirl news was the biggest in my circle of friends.  The hit CW show is introducing the first on screen trans superhero in the history of comic book media.  Yes, there have been trans superheroes on the page before, but never in an on screen adaptation.  The most important part is that they’ve cast a trans actress Nicole Maines in the part.  After the huge kerfuffle about Scarlett Johansson, I’m incredibly grateful that Supergirl did the right thing here.

Keeping in the DC family for a moment, Krypton dropped some wonderful details during their panel that has fans hopeful for continued representation.  The entire event was life tweeted by Jamie.  Here’s a snippet:

Cameron: Krypton is beyond gender roles and sexuality. Everyone’s getting it on with everyone. #SDCC #Krypton

Bouncing over to Marvel for a moment, Ryan Reynolds mentioned during the Deadpool 2 panel that he wants to explore Deadpool’s sexuality in the future.  “I certainly think that this universe . . . needs to represent and reflect the world in very real ways,” he told the audience.  Deadpool is canonically pansexual, so this would be a huge deal to reflect it in the cinematic adaptation.

Of course, some fanboys are displeased with this announcement. But who’s surprised by that at this point, really?

dudebros: comic accuracy!
ryan: xmcu deadpool being pan
dudebros: nO nOt LiKe tHiS https://t.co/cC8tvAHn9e

Stepping away from comic adaptations for our last bit of Saturday news. Wynonna Earp was confirmed for season four at the convention.  Wynonna Earp has been one of the most consistently LGBTQ+ positive shows on television, so fans are thrilled to have more of it.

Overall this has been a fantastically queer year for SDCC.  Major franchises have taken note and major companies are throwing inclusive parties at the con.  I hope this trend continues and that 20GayTeen is just the start of delightfully LGBTQ+ friendly geek media and events.  Let’s keep it going guys!