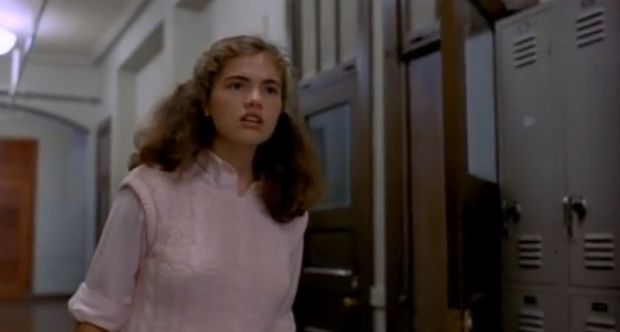 Tomorrow is Halloween and that means I will be doing several things:

It may seem strange for a feminist to love a film in which a deformed child murderer stalks and kills teenagers, most famously after sex. When I first saw this film as a 14-year-old, however, I was astonished by the originality of the premise. I had already seen a masked and typically silent killer slash his way through sexually promiscuous teenagers but I had never seen a killer with a personality. And I had never seen any death scenes as unsettling as the disquieting dreamscapes in which Freddy Krueger tormented and killed his victims.

I still maintain that the scene in which the dead Tina appears in a bloody body bag in the middle of English class to the sleeping Nancy is one of the most disturbing scenes in 1980s horror (it’s also the reason why my favorite Shakespeare line is from Hamlet).

Nancy, played by the underrated Heather Langenkamp, is my favorite Final Girl and the main reason why, as a feminist, I adore this film. I highly recommend this Halloween, checking out Carol J. Clover’s seminal Men, Women and Chainsaws: Gender in the Modern Horror Film, the book that gave us the term Final Girl. Rather than simply being the person who happens to survive until the end of the film, the Final Girl is often masculine in order to shift the stereotypically male audience’s identification from the male killer to the final female victim. She also wrote that the Final Girl possesses an “active investigating gaze” (48) which goes against the other groundbreaking work of feminist theory, Laura Mulvey’s “Visual Pleasure and Narrative Cinema”. Mulvey argues that cinema demonstrates that “pleasure in looking has been split between active/male and passive/female” (39) and that the film “narrative supports the man’s role as the active one of advancing the story, making things happen” (41) while women are merely one-dimensional icons to be gazed upon by the audience (41).

Nancy is not one-dimensional. She is one of the most engaging and authentic horror film characters I have ever encountered and as a young teenager, I was able to identify with her as hero rather than the monster as Other. 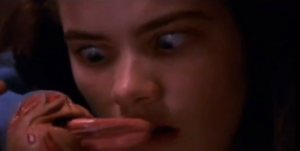 In fact, Freddy wasn’t really much of an Other to me: he’s a white male murderer. While his sexuality is called into question in the later films, in the original, he makes heteronormative sexual overtures to the victims, especially to Nancy in the famous leer, “I’m your boyfriend now, Nancy” over the phone. He even makes a reference to rape when he threatens our female hero, “I’m going to split you in two.”

Again, as a feminist, I’ve had plenty of people think this would upset me too much to enjoy the film. And I agree that Freddy Krueger is disgusting and his sexual assaults against women in the films are one of the most despicable things about his personality. It’s also problematic that in the later and lesser films, these assaults are often played for laughs. In the first film, however, he wasn’t the wisecracking smartass that he evolved into but a truly grim and dangerous shadow figure. He wasn’t funny and the things he did to his victims weren’t either.

Returning to Nancy, she was and remains the female hero that I needed in my life as a feminist. While Clover claims that the Final Girl must be masculine, I always found Nancy very feminine. Yes, she remains a virgin and yes, she employs power tools to basically Home Alone her house in her final confrontation against Freddy but throughout the film, her femininity is never hidden or neglected. She giggles with her best friend during a sleepover; she refers to her father as “Daddy”; she sobs in the police station after the first death; she complains about her looks after spending nights staying awake; she even wears a pink outfit in her first dream sequence with Freddy. These are all signifiers that Nancy equals stereotypical femininity. Yet at the same time, she is our hero; she is the subject of the narrative and while Freddy is the first instigator of the plot, she propels the rest of it along.

She refuses to back away from Freddy. She is going to defeat him no matter what, while her boyfriend just seems nonchalant about the entire situation (and it should be noted that he famously is killed in bed not long after cracking a joke about leering at beauty pageant contestants). As Nancy declares, “I’m into survival.” No one else in the film seems to be. 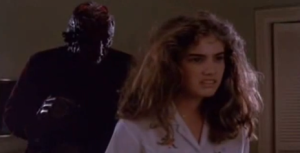 Furthermore, she is only one who figures out Freddy’s true weakness. Like other sexual predators, Freddy’s power lies in the fear and control he holds over his victims. At the climax of their battle, Nancy turns her back on Freddy and says, “I take back every bit of energy I gave you. You’re nothing. You’re shit.” He is instantly powerless to hurt her in any way now.

This moment blew me away as a teenager and it still affects me today. Never before had I seen a female hero defeat a male tormentor by simply refusing to allow him to have any sway over her. I still see a lack of this in contemporary films and I wish we had more women like Nancy in the horror genre.

This Halloween, I invite all of you to take another look at the original A Nightmare on Elm Street and cheer on Nancy with me. And whatever you do, don’t fall asleep.