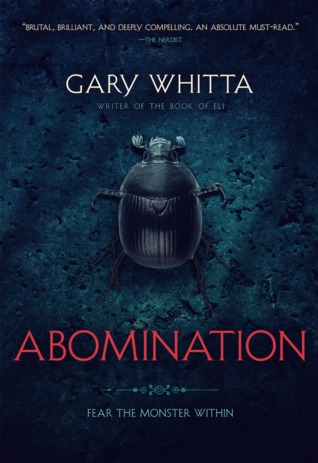 As an avid reader of historical fiction (and a decent amount of fantasy), I was intrigued by Abomination. Knowing that the author, Gary Whitta, also wrote the screenplay for Book of Eli, as well as writing for Telltale’s Walking Dead game, peaked my interest even more.

Abomination begins during King Alfred’s reign in 9th century England. They are at peace with the Danes but worried that once their leader passes, trouble will arise again. This is where the Aethelred, the Archbishop of Canterbury, steps in with some mysterious scrolls that he discovered – scrolls that basically contain magic spells that turn animals and humans into hellish creatures.

Probably the biggest issue with this novel is the way it is broken down into two parts. Part one features Wulfric, a knight in service to King Alfred, going out to rid the country of abominations and of Aethelred himself. Part two features Indra, a teenage girl who wants to be part of the Order that was created to destroy the rest of the abominations. Unfortunately, Wulfric is a wooden and frustrating character, though thankfully Indra was a big improvement. She has a temper that’s not all just teenage angst, and the little insights into her anxiety issues were eye-opening (if too few – they were touched on not long after she was introduced and then not brought up again for the rest of the book).

I think the biggest problem with this story was that so much of it simply wasn’t fleshed out. While I’ll admit that at many points I just wanted it to end, I think I would have felt differently if either (a) it was longer or (b) parts one and two were their own novels, possibly with a third novel set between them. I get that this last option would have likely meant fewer plot twists, but to be honest those were so obvious to me as a reader that I don’t think that would have mattered. In fact, I would absolutely trade those plot twists for more details on the battles with the abominations, Cuthbert’s studies, Indra’s childhood, etc.

If you’re looking for an easy read and really enjoy historical fiction and/or horror-style fantasy, I say give Abomination a go and see what you think. It didn’t turn out to be up my alley, but it’s definitely a different story and can certainly see why some people would enjoy it.