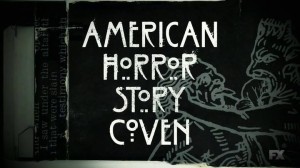 This week’s episode of American Horror Story: Coven got rid of the external threat and brought the focus back to the conflicts between the witches. There were some new developments and I can’t wait to see how all the plots come together for the finale, just two weeks away!

The episode opened with LaLaurie’s move to New Orleans. When it comes to the characters in AHS:Coven it’s better not 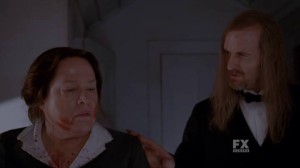 to feel sorry for most of them. I was worried the writers would be doing a redemption arc for LaLaurie, but this week’s episode laid my worries to rest. The character goes back to her torturing ways when Queenie brings her back to the Coven. LaLaurie plans to take her revenge against Marie Laveau with some help from Spalding and I can’t wait to see where that goes when the season ends.

Cordelia’s storyline has to be the most disheartening in the show. She tried to protect the Coven but her 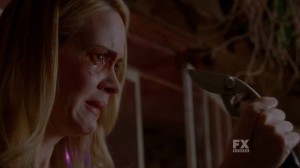 husband turned out to be a witch hunter. She lost her sight, got new powers, and then those were snatched away from her too. Seeing Delia break from inside really made me feel sorry for her. In the end, she took out her own ‘new’ eyes to get her powers back in order to help the others.

What I couldn’t understand was how quickly the show took care of the whole witch hunting organization. Fiona and Marie, with help from the Axe Man, wiped out the whole board of directors in a minute. I guess the writers decided to take care of any loose ends before the end of the season. However, it’s not as if I didn’t like the shifting of the focus back to the Coven. For me the show is best when showing the conflicts the witches experience from within the Coven. However, Claudia not having a fight with her father-in-law feels like a lost opportunity…sigh!

Now that the external threat is gone I am waiting to see how the dynamics between Fiona and Marie will change. It’s not like they were really ‘allies’ to begin with. Not only that, the identity of the New Supreme is still up in the air.

Who do you think is the next Supreme? Feel free to comment.