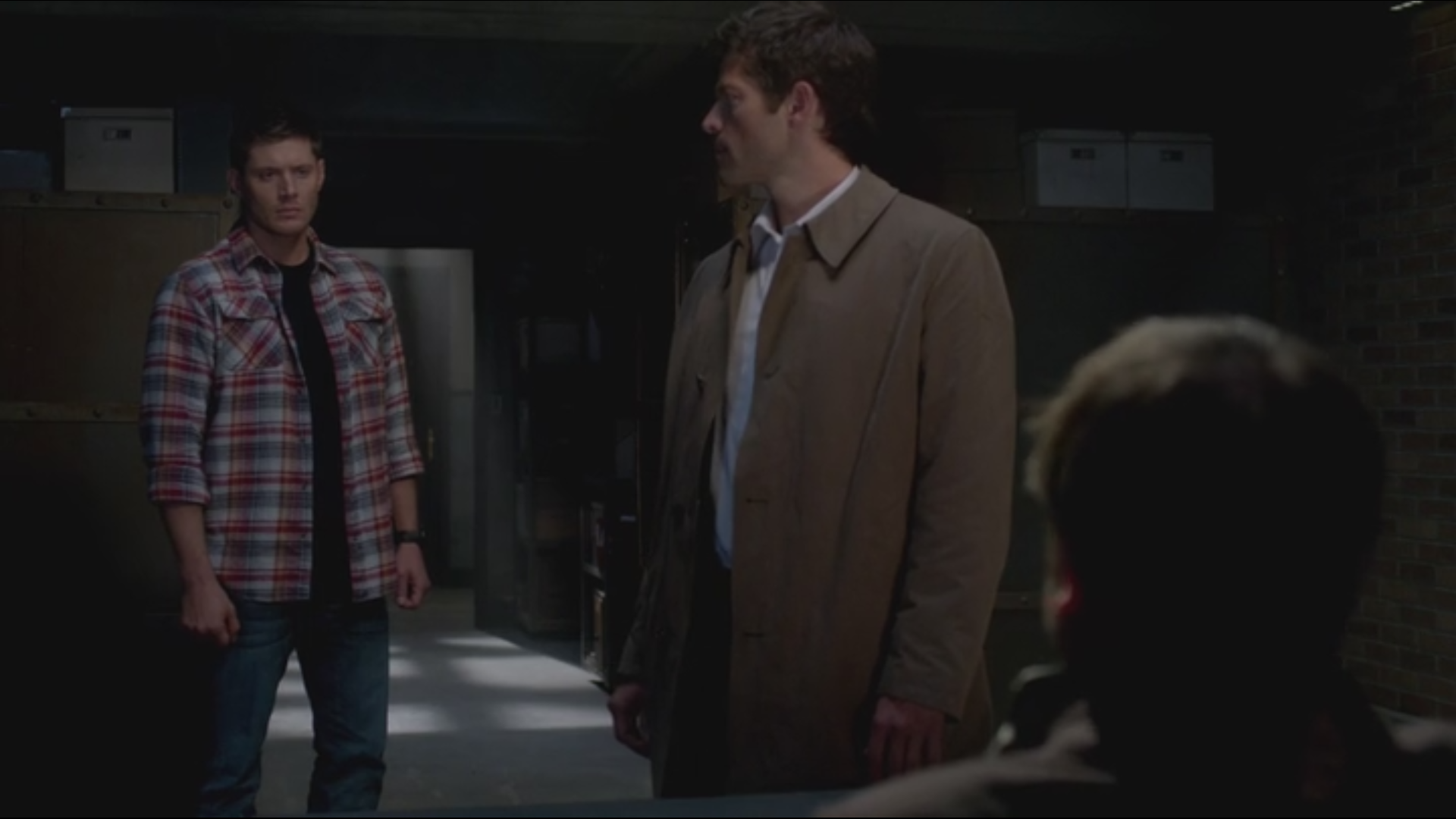 Many fans had very strong reactions to this episode, but oddly, I found myself going against the grain and feeling rather disconnected for most of it.  Perhaps the weak first half of the season has dampened my excitement for the show or perhaps my faith in the show over all is beginning to waiver.  Whatever the reason, while most of the fandom was loudly cheering for a job well done, I just wasn’t very thrilled with this episode. Its saving grace for me was that it wasn’t filled with frustratingly problematic elements like most of the first nine episodes of the season were, so I left the episode without being horrifically offended by it.  I feel like the show should be better than simply “not offensive,” though.  I was, however, quite happy to see the return of many of my favorite characters.  Castiel, Abbadon, and Crowley all came back in the same episode.  They got to play integral parts to the story this time instead of being background characters or comedic relief.  The overall plot of the season seems to be gaining steam now and I hope it keeps up this momentum because I desperately need something to grab my attention again. 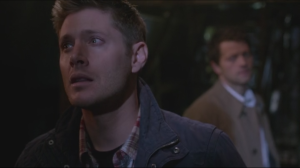 Castiel is back in a trench coat of sorts.  It’s not exactly his previous trademark coat, but it’s close enough that in close up shots it feels like we have the old Cas back.  He also has access to angelic Grace so he’s healing people and answering Dean’s calls like the Castiel we all know and love from seasons past.  I feel like the writers wasted the opportunity to explore human Cas more and the ways they did explore his humanity were highly problematic.  The method in which he gained Grace just doesn’t exactly sit right with me either.  He stole it from another angel, which is both morally problematic and in direct contradiction to existing canon.  We’ve been led to believe that Grace is the very essence of an angel like a human soul is the essence of a human, but now the rules of the universe have changed.  This isn’t the first time this season has backtracked on established canon.  Near the beginning of the season we saw the rules for reapers change, so that’s par for the course.

Despite the mistakes of past episodes, Castiel’s presence in this episode was generally a positive aspect.  We once again have characters within the narrative pointing out just how hot Castiel is.  Now he’s been dubbed “Captain Sexy” by a demon.  This has also become a sort of running gag on the show and I’m surprisingly okay with that.  Misha Collins is a rather handsome fellow, after all.  Makes sense for canon characters to recognize that fact.  As frustrating as parts of his story can be, these little bits make me smile at least.  It’s great to see characters say what we’re all thinking.  Now if only they could tap into our feelings about plot and problematic elements in the same way they do for our attraction towards the lead actors then we’d be all set.

Dean apologizing to Castiel for kicking him out of the bunker and for lying to him about Sam was also an interesting change of pace.  It’s rare for us to see Dean admit to mistakes like that.  When Sam is in danger, though, Dean becomes vulnerable and we get to see these rarely glimpsed sides of him.  Despite his vulnerability, though, Dean still remains strong for those he cares about.  When Castiel becomes upset with Gadreel and starts to shake him around, Dean grabs him and calms him down.  Dean has never feared stepping in and breaking through to Castiel even though the angel can easily overpower him.  Castiel also has no problem deferring to Dean, a human, who many angels view as an insignificant species by comparison.  There’s a trust between them that hasn’t really had a chance to display itself this season and I’m glad we were given this moment.  I hope it leads to Castiel helping the brothers like he has in seasons past. 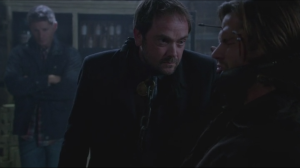 We’ve also seen the return of Crowley as an active player in the show instead of a captive in the bunker as he has been for the rest of the season.  Episodes like this make me wish Crowley wasn’t so evil and that he could be a permanent member of Team Free Will.  If it weren’t for the frequent people killing, is he really that bad?  I mean sure, he’s a demon, but he’s helped the Winchesters out a lot and he’s just all around an enjoyable character.  He’s crafty.  He’s smart. He’s skilled.  He’s sarcastic.  I guess none of that really makes up for being the King of Hell, though.  That title sort of comes with being antagonistic to our heroes.  Heck, I just like having Mark Sheppard on my TV screen.  Is that so wrong?  Killing people (Linda Tran especially) firmly places him in the “villain” camp so we have to keep him as an occasionally helpful antagonist.

Having him be an equal opposite to Castiel is always a pleasure and I enjoy seeing my two favorite Supernatural actors playing off each other.  Mark Sheppard and Misha Collins are both incredibly entertaining individuals and having them in a scene together makes me super happy.   I want to see more of it, but with Crowley being an antagonist and Castiel being on the side of our protagonists, we probably won’t get to see them share screen time very often.  It’s too bad because these are some of my favorite moments. 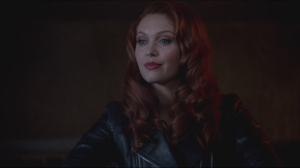 This episode also brought back Abbadon, who is one of my favorite characters to come out of the last three seasons. In a show where new female characters have a habit of dying by the end of the episode they are introduced in or being rendered unlikable for one reason or another, she has shown an alarmingly resilient longevity.  Even when she was dismembered and left for dead Abbadon defied the odds and came back.  She’s a kick ass, driven, and determined character that I want to root for.  Yeah, she’s an antagonist and has killed people, but, like Crowley, I find myself oddly happy to cheer her on.  I root for villains on this show more than I do any other piece of media.  But when your villains are as entertaining as Crowley and Abbadon can you really blame me?

When it comes to Crowley vs. Abbadon I’m not exactly sure who to root for as an ultimate champion.  Both of them are incredible and I wish we could have some sort of compromise where both can exist together.  Unfortunately they want to rip each other apart so one of them will probably be dead for good by the end of the season.  It’ll probably be Abbadon, unfortunately.  She’s newer to the show and much more of an antagonist to our heroes.  While Crowley is also evil and definitely a “bad guy,” he is typically willing to team up with the Winchesters when the occasion calls for it.  Abbadon has done no such thing.  I can easily see Crowley partnering with the Winchesters to take her down later on this season.  I’ll be incredibly conflicted when that happens.  I love Abbadon very much.  Three cheers for the Angry Ginger! 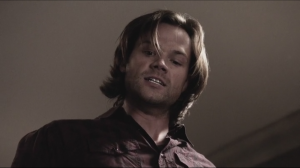 The most dramatic turning point in the episode was the return of Sam.  I’m pretty tired of the “we must save Sam” plot that seems to be reoccurring every single season, but I did enjoy seeing him gain strength and shove Gadreel out of him with his own willpower.  We needed Sam to have a hero moment just about now.  While Crowley possessed him in an attempt to save him, it was Sam’s strength of character that won the battle in the end.  Now that Sam has been saved I hoped we could move forward and have the brothers be a cohesive unit again.  It almost looked like we were going to have that, too, until the last two minutes of the episode.  Sam is angry with Dean, which makes sense given what’s transpired since the beginning of the season.  Dean lied and one of the few friends they had died as a result.  The brothers part ways yet again, which is another plot point that I’m growing rather tired of.  The brothers lie to each other.  They fight.  They split up.  It’s repetitive and it’s lost its’ dramatic impact. The ending scene with Dean dramatically walking away from Sam and getting into the Impala is so reminiscent of the other times they’ve split up that I wasn’t as emotionally distraught as I should have been.  These are our heroes.  They’re the Winchester brothers.  We want them working together and I should be upset after that scene, but it’s been done too much these past nine seasons.  It’s time to try something new to get the audience to react.

This episode wasn’t terrible, but it wasn’t exactly exciting or extremely memorable for me either.  It sets up a lot of plot, but I’m not sure if I have faith in the writers to follow through anymore.   The season has been repetitive and tiring, while also reversing already established canon to fit the needs of individual episodes.  It didn’t get me as emotionally invested in the plot as it could have.  I hope that by bringing back so many of my favorite characters into key positions in the plot this is a turning point of the season and that things will start to improve.  Supernatural has been a huge part of my fandom life and it hurts me seeing it not live up to its full potential.  I want to see this show succeed and I want to be emotionally invested with it again.  Unfortunately, an episode that should have moved me, left me feeling entirely disconnected.  It was, however, a step in the right direction.  I hope the show continues taking these steps and sees a dramatic improvement in the last half of the season.