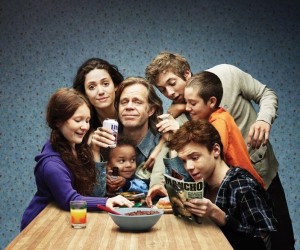 One thing I love about a TV show, a book, or a movie is the element of escapism.  With a few simple clicks or the flip of a page, I am transported to Beacon Hills, Hogwarts, or inside Iron Man’s suit.  That being said, sometimes I don’t mind sitting down with a character with whom I can relate.  A character whose bra and panties don’t match, struggles to pay the bills, but still smiles and knows how to have a good time.  All this and more I have found in spades in Showtime’s Shameless.  The show is a remake of the UK series and revolves around the misadventures of the Gallagher family.  Fiona (played by Emmy Rossum) is a twenty-something raising her five younger siblings Lip, Ian, Debbie, Carl, and Liam for her alcoholic father Frank (William H. Macy) and her severally mentally ill mother Monica.  Friends of the Gallaghers are their neighbors Kev and Veronica, Shelia Jackson and her daughter Karen, and Mickey and Mandy Milkovich. 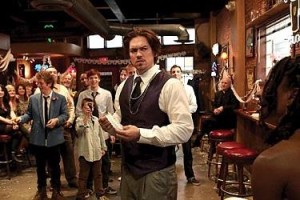 What I love the most about Shameless is the strong sense of “family” in its varied forms.  The Gallaghers feel like people I would be friends with.  Fiona is willing to do almost anything for her siblings, even becoming their legal guardian in the third season.  She may fight with them at times and wonder if she isn’t just making things worse, but through it all, she loves her family.  Her friends and neighbors Kev and Veronica always do what they can to help, regardless of how crazy the situation is.  The relationship that Kev and Veronica share with Fiona reminds me that you make your own family.  One of my favorite episodes from the first season was where Kev and Veronica got fake married.  Veronica’s dad had left her an undetermined amount of money that she could use to buy her first home.  They couldn’t get officially married as Kev left his first wife because she was physically abusive and they never got a divorce.  So Lip, Ian, and Carl bribed a priest to perform the ceremony, and they got married at Kevin’s job, a bar called the Alibi Room.  After the ceremony, Veronica’s mom gives her the check…and it’s only $500.  But they still have a great time, and the happily “married” couple poses for pictures with the Gallaghers, Kev saying, “Okay Gallaghers, you’re the only family I’ve got so let’s make this official.” 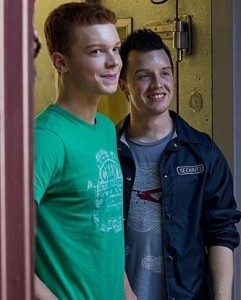 Another thing that I loved about Shameless is their unflinching looks at how the other half lives.  Whether it’s alcoholism, being gay, or mental illness, Shameless deals with it in strokes of humor and tragedy.  In the first season, Mandy Milkovich comes onto Ian and he turns her down because he’s gay.  But she takes it the wrong way and tells her brother Mickey that Ian tried to force himself on her.  Mandy finally calls her brother off when Ian tells her that he’s gay.  When she questions if he’s lying, he simply asks, “In this neighborhood?  Why would I lie about that?”  His sexuality is further proved when Mandy has him grab her boob and cups his crotch, finding nothing happening down there.  They proceed to have a fake relationship, so no one will question Ian and gross guys will leave Mandy alone.  In a rough neighborhood like this, it is not okay to be gay.  Ian’s family all slowly find out that he’s gay and accept him, but he isn’t out and proud.  Being gay in Ian’s world equals weakness and getting your ass kicked constantly.  He and Mickey secretly start sleeping together, and you can see the pair slowly developing feelings for each other, Mickey struggling to express them in the ways Ian wants.  But when Mickey’s dad finds out in the third season, he pistol whips Mickey and forces him to have sex with a female prostitute, holding Ian at gun point and forcing him to watch.  It’s a heartbreaking scene to watch, especially the silent looks Ian and Mickey give each other.  People might question why I would like such a brutal worldview, but the way I see it, things aren’t always easy.  There are kids out there like Ian Gallagher and their story demands to be told just as much as Kurt Hummel’s does. 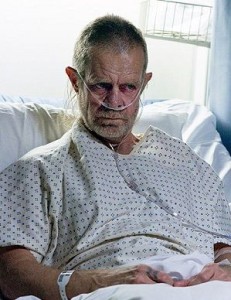 Frank’s drinking is a reoccurring theme on Shameless.  In this show, there is no intervention and no tearful and heartfelt send-off to rehab, where Frank returns to his family a changed man.  No, Frank is, as Veronica describes him, “a professional”.  He’s too far gone in his ways, and he will not change for anyone, even himself.  Unfortunately I have a family member who is like Frank, unwilling and unable to quit, and it has cost him things, as it does with Frank again and again on the show.  With each season, just when I think Frank can’t sink any lower, he surprises me and does something that makes my jaw drop.  For example, in the third season, Fiona kicks him out for good and he goes on a bender at the Alibi Room, culminating in a phone call to Child Protective Services.  Fiona later finds out via her social worker that it was Frank that made the call and gets a lawyer, securing legal guardianship of her siblings.  Frank has his moments where he tries to be a father, but all and all, he is a very selfish person, intent on self-destruction.  William H. Macy does a phenomenal job on the show, and it’s a sin and a shame he hasn’t been nominated for this role. 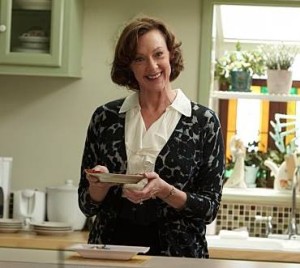 One of my favorite characters on the show is Shelia Jackson, played by the ridiculously talented Joan Cusack.  She suffers from germaphobia and agoraphobia but still tries her hardest to be a good wife and mother.  Her struggles with both of these conditions are another ongoing theme within the show.  Your heart breaks for her in the first season when she is unable to attend Karen’s parent/teacher night, but it warms back up when she quizzes Frank for all the details, asking him to tell her again and again.  Shelia is one of the most optimistic and naive characters on the show, sometimes to her detriment.  Her willingness to see the good in everyone gets her into situations where she is used.  Frank ropes her into taking care of his dying mother Peggie in the second season, and Shelia does it regardless of how hateful the older woman is to her.  She has a complex relationship with Karen in later seasons but loves her in spite of all her faults.  You can’t help but cheer for Shelia as she ventures out into the world, eager to help her new extended family in any way that she can.

If you are a fan of dark comedies and have a twisted sense of humor, then Shameless is a TV show for you!  Yes, the Gallagher’s lives are rough, but they deal with it and keep carrying on because quitting is not in their DNA.  I think that’s what I love most about this show: that no matter what happens to them, regardless of how many times they are thrown down or told to just quit, they will get back up, ready to fight another day.  The show has currently started its fourth season and airs on Showtime on Sundays at 9 PM EST/8 PM CST.  Are you a fan of the show?  What are some of the aspects that you enjoy?  Comment below with your thoughts and thank you for reading!