RuPaul’s Drag Race All Stars Season 5 Coming to Showtime this June! Will You Pay? 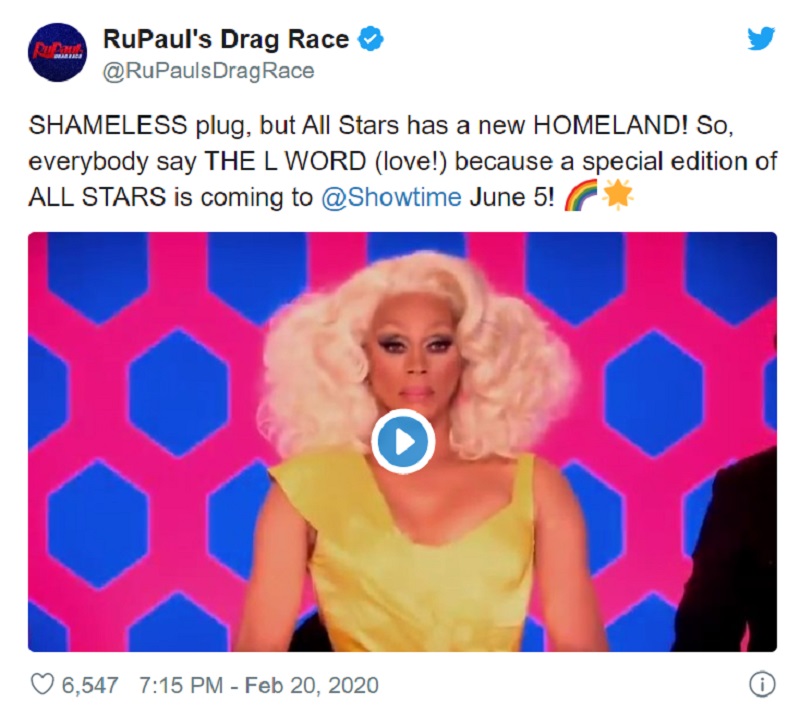 Ready your purse, henny! RuPaul wants you to pay for a Showtime subscription to enjoy RuPaul’s Drag Race All Stars Season 5 this June. Of course, people in the fandom aren’t happy about the change.

There’s a lot of RuPaul’s Drag Race content for fans to look forward to this year. Season 12 will be premiering on VH1 come February 28, 2020. After the finale, All Stars Season 5 will premiere on June 5, 2020, on Showtime. There’s also RuPaul’s Celebrity Drag Race mini-series in the works. Drag Race UK also got greenlit for a second season.

“With a large and loyal following, we believe this franchise will be additive to Showtime’s subscriber dynamic, which is why we will air a special new season of ‘RuPaul’s Drag Race All Stars’ on Showtime on a first window basis,” said Bob Bakish, the president and CEO of Showtime’s and VH1’s common parent company ViacomCBS. The comment was made during the company’s Q4 earnings conference call today.

“RuPaul’s Drag Race All Stars’ is a culture-defining show that fits perfectly within the contemporary programming Showtime offers in both scripted and unscripted,” shared Jana Winograde, co-president of entertainment at Showtime Networks Inc. “We are excited to take advantage of our relationship with our new sister company VH1 to present a special edition of this sensational series and bring in this passionate and robust fanbase. It’s the latest example of how we can leverage our combined portfolio to provide new experiences for our audience.”

Right now, I don’t know how to feel about the fifth season of RuPaul’s Drag Race All Stars coming to Showtime and making fans of the franchise pay for a subscription to said channel. A lot of people, especially those from the queer community and in need of representation, aren’t financially stable enough to be paying for a premium network.

From what I can see, the response to this announcement hasn’t been great on Twitter.

Let’s see if Showtime decides to release every episode for free (on the Showtime streaming service or somewhere) a week or two after it has aired. Fans who have stuck with this franchise from the beginning deserve a bit of love.

Anyway, I will be doing reaction and review videos of RuPaul’s Drag Race Season 12 over on The Geekiary YouTube channel. So, feel free to subscribe!

Previous:“Boruto: Naruto Next Generations” Manga Issue 43 Review: Manifestation
Next: Face Your Destiny in “A Queen in Hiding” – Book Review