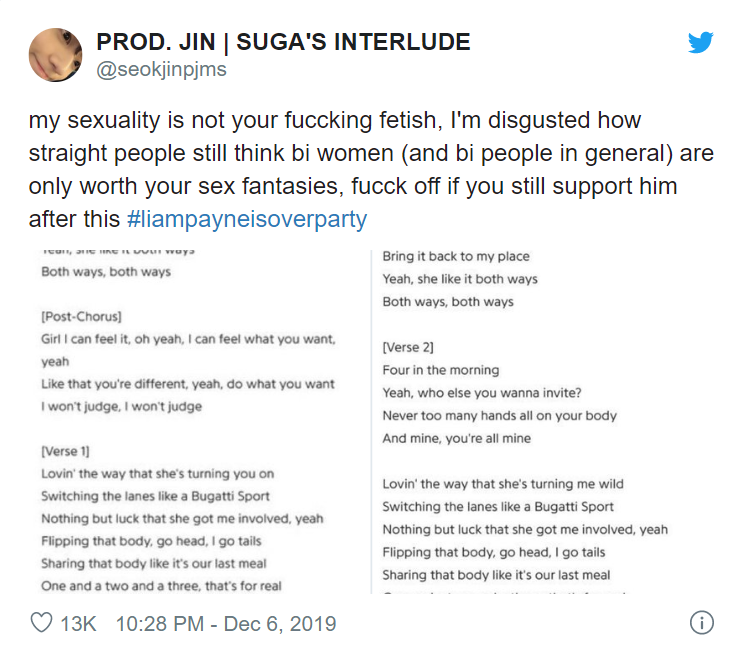 When I saw the Twitter hashtag about Liam Payne being canceled, I had to force myself to see what the entire debacle was about. Anyway, it turned out that Payne ended up fetishizing bisexual women in a new song of his. I guess we should congratulate him and induct him in the Hall of Fame with other cis-straight dudes who view women as objects meant for fulfilling their fantasies?

I’m going to come clean. I was never a One Direction fan. It’s not like I didn’t appreciate their music. They do have a couple of songs I’m okay listening to. It’s just that whenever I see a young group of singers or performers blowing up I can’t help but think of the unhealthy working schedules they’re being forced to follow. We all know what Simon Cowell is like.

Anyway, not knowing what the One Direction group members have been up to can be a bit difficult when keeping an eye on Pop Culture is your job. So, I’ve heard stuff about what each of them continued to do after disbanding. And, for some reason, Payne has occasionally come up as the problematic one.

Now, I would say that it might be because certain fans like him less than the others. But still, it’s not like the fandom forced Payne to write his latest biphobic song or say other problematic stuff.

While, as of writing this, Payne hasn’t commented on the fan backlash, Ruth Anne (who helped write this song) has tweeted about it. Apparantly, their intent wasn’t to insult anyone. However, the fact she stated the song wasn’t about anyone’s sexuality in particular is what took me out.

The entire song is about bisexuality! What the heck is she trying to reach for?

Congrats to Liam for playing a part in perpetuating a bisexuality-specific stereotype.

Also, (apparantly) recently, Liam didn’t use the correct pronouns when talking about singer Sam Smith during a radio show.

He has also made some comments about not wanting Harry Styles to babysit his child because of stylistic issues, which some in the fandom think was a dig at Styles’ queer (or at least, queer-adjacent) wardrobe. Also, he’s been accused of being homophobic before. It’s a complete mess.

Anyway, regardless of what you think of Payne’s past actions, the point is that his latest song is problematic. And it’s understandable if certain people aren’t fans of the lyrics.

Some fans are using the current drama to remind everyone about how Styles (regardless of his sexuality) has continued to be accepting of his queer fanbase and how Payne can do better.

Let’s see if he does.

As someone who takes queer representation very seriously, this entire thing, while disappointing, wasn’t very surprising. There’s still a lot of progress that needs to be made in the music industry.

What do you think of the song’s lyrics? Feel free to share your thoughts with us.