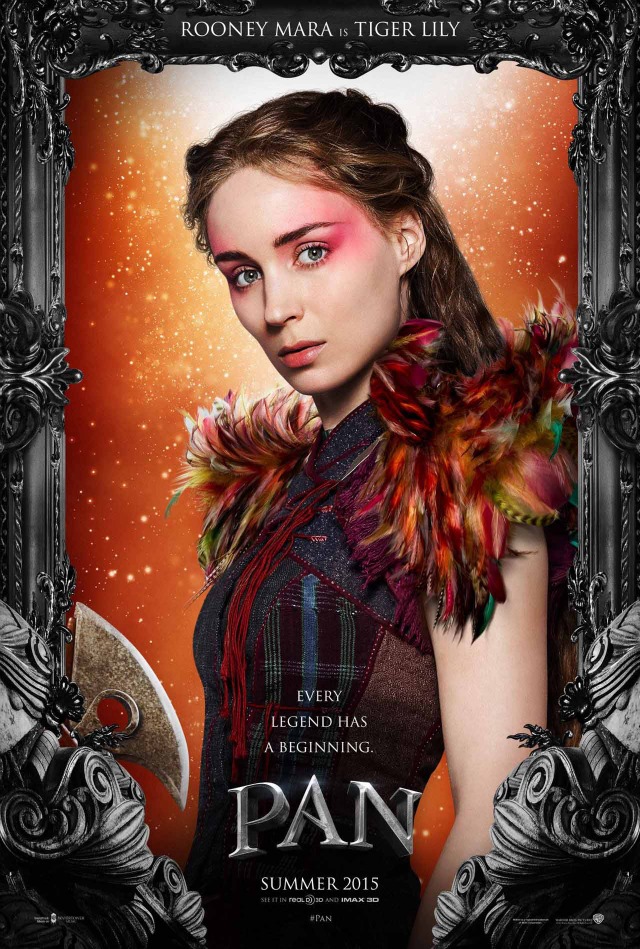 Since it was announced that Rooney Mara had been cast as Tiger Lily in Warner Bros’ live action re-imagining of Peter Pan, there have been so many articles explaining exactly why this is offensive, that I can’t link to them all. But it’s one thing to imagine an abstract idea of something, and another to see it in front of you, because if this promo image is anything to go by, then Joe Wright’s depiction of Tiger Lily is even worse than we imagined, which is really upsetting since the bar was already pretty low.

Well, at least they’re not doing what they did with Johnny Depp in The Lone Ranger. They did give her red highlights in her makeup, which is, as The Gloss points out, reminiscent of red face. Even without reading the red eyeshadow as red face, they have basically erased Tiger Lily’s racial background and with so few characters that are EXPLICITLY Native American, whitewashing the ones that are available is unforgivable and I’m not the only person that thinks so.

Princess Tiger Lilly is NATIVE AMERICAN what is this. She’s not Caucasian. What are you doing. – @TheEvalTwin

I am increasingly unforgiving of whitewashed casting. THERE IS NO REASON FOR THIS OTHER THAN PRIVILEGE. – @charlottenicdao

Uhmm .. Isn’t Tiger Lily supposed to be a Native American princess  this is kind of a piss off. #Pan – @Dreeaaver

So tiger lilly just got white washed in the new #PAN movie, what’s next – Jlaw as Pocahontas? – @notorious_tia

Why is a white woman playing Tiger Lily in #Pan ?? Tiger Lily is native American. I don’t doubt Mara’s credentials, but not for that part. – @Clare_Trevatt

#Pan‘s Tiger Lily is whitewashed AND it looks like a Michael’s threw up all over her. – @RebeccaPahle

Oh and now the Pan trailer is out with a white woman cast as Tiger Lily. Cmon America. (I love you Rooney Mara but no) – @IdleTeeth

Is Joe Wright’s Peter Pan movie the multi-racial one that cast Rooney Mara as Tiger Lily? I Just need to know which movies I should avoid. – @brittseegers

Peter Pan isn’t exactly sensitive in its portrayal of Native American culture, but considering the fact that according to The Wrap, director Joe Wright was “planning to create a world that very international and multi-racial, effectively challenging audiences’ preconceived notions of Neverland and reimagining the environment.” This could have been the perfect time to make Tiger Lily into more than just a racist stereotype, but instead it’s just another case of Hollywood whitewashing.