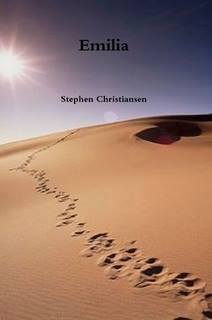 Today I have indie author Stephen Christiansen with me. Stephen is the author of the Orbbelgguren fantasy series, which shows characters facing conspiracies and schemes, and how their actions change the world around them. Check out our exclusive interview where we talk about Stephen’s inspirations and how it’s like to write a series that currently consists of 17 books!

I am 45, married to a wonderful and beautiful wife. We just celebrated 17 years of marriage. We have a lovely 13-year-old daughter. We live in Everett, Washington and both work together in medical billing, for the same company. We are very active in our community and help with Camp Fire USA.

I was a Navy brat for 16 years before my dad retired and moved to Camano Island, Washington, so I’ve traveled a lot and got to explore the world. I feel very fortunate to be able to see great landscapes, mountains, deserts, and forests. I’ve seen ruins of ancient civilizations and some of the greatest cities of today. I’ve seen the best and the worst of people and now I’ve been able to put it all into a great storyline.

When did you start writing? Was it something you always thought of doing?

I started in the 6th grade and [I] seemed to be able to tell stories with twists and turns with off-the-wall plot lines. I think it came from watching too many Ray Bradbury shows, The Outer Limits and Twilight Zones. It wasn’t something I always wanted to do as a profession; I think I always wanted to be an astronomer. However, I always did enjoy writing and letting my mind wander to see what it would come back with. Writing was more of a creative outlet then something I thought I would take seriously.

When I think about it, I think it was a way to escape from the traumas of my childhood. I wasn’t raised in the best of environments and writing let me create a world that I could live in for a short amount of time. I guess this series is still an outlet of my younger years. 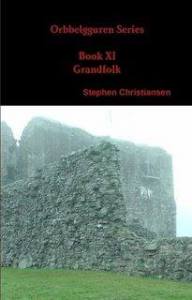 What can you tell us about your Orbbelgguren book series? What was it like to think of and plan such a long series?

The Orbbelgguren series is currently a 17-book series. I had read The War of the Spider Queen series that was overlooked by [R. A.] Salvatore and thought, “Why not make it eight books instead of six? Wouldn’t a spider queen like eight books instead?” So, I started my series to be  eight books. Then it became ten, then 14, now it’s 17 with three offshoot books including the one I’m working on now: Emilia.

The series starts out more like an introduction of characters trapped in conspiracies and schemes. We watch as these characters develop and start to grow. Each action they make seems to make another small ripple in a series of events that starts to change the world. I wanted to create a series where the reader watches a chain reaction that starts off small but then threatens to rattle the cosmos.

I think most of the primary characters, and some of the secondary, are a projection of myself. They aren’t just characters created to entertain, but characters that go through trauma and find their inner strength to grow and develop. Some of these events are events I can relate to, events that I’ve gone through personally and this is more of a catharsis than just entertainment.

I hope the readers can see character development, deep personalities, inner struggles, a number of thick plotlines intertwining with each other, and multiple schemes on various levels. Hopefully I’ll be able to surprise the reader with something unique, something that will keep people guessing until the very last book.

As of planning the books, the ideas have slowly come to me in bits and pieces. I don’t think I’ve ever sat down and said, “I’ll write 17 books, let’s start at the end and work backwards.” I think subconsciously my mind knows what it wants to write and I only get snippets, so I surprise myself when I think, “Oh, that will work” and it fits like a piece of a puzzle. I wonder if the 17 books is the end or if my mind will come up with something even more surprising. Time will tell.

What other authors have inspired you as a writer?

The authors that have had the greatest impact on my writing and an inspiration to me are R. A. Salvatore, Stephen King, and my favorite, Edgar Allan Poe. I think you can see a lot of Salvatore in most of my books, but there is definitely an influence from King shown in book 7, Qu’ellar B’Nossta and more so in the one I’m writing now, Emilia.

What can you tell us about your journey as an Indie Author?

It’s been rough. It’s difficult to get started outside the mainstream of publishing. I do all the hard work and so far very little pay off, but it’s still early.

What are your thoughts regarding self and traditional publishing?

There are pros and cons to each.

Self publishing is risky. There are a lot of authors who think they can write and a lot of readers who might think that a particular book is good and a poor book goes viral while a good book is overlooked. Tossing in a self published book is like tossing a drop of water into the ocean. However, the payoffs are greater. Not only can the author set the prices and be able to keep all of the income, but the author can set the market and eventually his or her own success at the rate he or she wants. Personally, I don’t need overnight fame or a huge viral success. It would be nice, but I think a small cult following fan base would be perfect for me.

Is there any advice you can give to new indie authors regarding promotion?

Talk up the book with your family and friends. Reduce the first book to a low introductory price for a short time. Create a video. Set up a Facebook, Twitter, and Goodreads accounts. Get some reviews. But the most important is to never give up. As an indie author, your success is up to you.

Are there any upcoming works we should know about?

I’m working on two simultaneously. Currently I’m finishing an offshoot book called Emilia. I should be finished with it by the end of the year and hopefully done editing it by the end of January 2015 when it will be released. Meanwhile, I’m already thinking about book 12 of the Orbbelgguren series, Grandfolk.

Emilia is about a girl introduced near the end of book 3 of the Orbbelgguren series, Maldev. In her own book, we are able to go back to when she was younger and see her life struggles and how she gets involved with the series, although indirectly. It’s written in more of a YA format then the rest of the series, nothing I planned, it was just the way it came out. We watch as Emilia goes through so much physical and emotional trauma, but when she comes out of it, she becomes a very strong and independent woman. It helps fill in some gaps between book 3, Maldev and book 4, Transitions.

Grandfolk takes place immediately after book 11 of the Orbbelgguren series, The Troll Wars. Here, we are going to see what happens to the world after a great war has left it to die. There will be survivors’ remorse, anguish over lost loved ones, guilt about decisions that had to be made, ghosts haunting those that made these decisions, but worse yet there is a vacuum of power that will be filled.

The individual that comes to power has been driven mad by watching his god die and has been made insane by traveling through time too often. He will stop at nothing to ensure that his species survives, even if it means destroying everything else. He will be able to bring back the dead and turn them against their loved ones. The war is over, the nightmare has just begun. Death is only the beginning.

You can check out the Orbbelgguren Series on B&N, Lulu, and iTunes.

Have you read books by Stephen Christiansen yet? What did you think? Let us know!

1 thought on “Discover a World of Fantasy in the “Orbbelgguren” Series by Stephen Christiansen!”