Assassin’s Creed DNA Testing Bundle Will Reveal If You Have “Warrior DNA”! 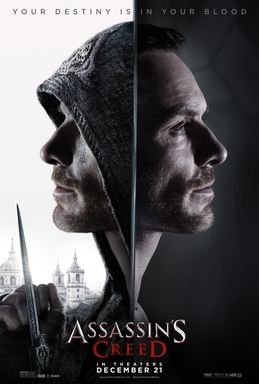 In a very interesting promotional step for the upcoming Assassin’s Creed live-action film, 20th Century Fox has partnered up with Family Tree DNA. The partnership offers everyone the chance to see if they have warrior DNA. Here’s the official description for the Assassin’s Creed DNA Testing Bundle:

Discover your past with the Assassin’s Creed DNA Bundle from Family Tree DNA! You too can jump back in time like Callum Lynch, who, through a revolutionary technology called the Animus, travels deep into his past and discovers his ancestor, Aguilar, who lived in 15th Century Spain as part of a mysterious secret society, the Assassins.

Now through the Assassin’s Creed DNA Bundle, there’s no need to enter the Animus to unlock your own genetic memories! With the world’s most comprehensive matching database, Family Tree DNA’s premier suite of DNA tests enables users to trace their lineage through time, explore ancestry and connect with relatives across the globe.

Using a simple cheek swab, our signature Family Finder test finds DNA matches within five generations and includes myOrigins, a powerful mapping tool that features a highly detailed geographic and ethnic breakdown of where your ancestors came from. Plus, for a limited time only, find out if you have the Assassin’s “Warrior Gene” in your DNA!

Furthermore, you can also enter for a chance to win an action-packed Assassin’s Creed adventure in Las Vegas as well. Entry is free.

So, does the “Warrior Gene” exist? Well, as a geneticist I can say that it sure does- as far as some scientists are concerned. It deals with particular variations in a person’s X chromosome gene that is responsible for the production of monoamine oxidase. Long story short, certain behaviors are linked to the “Warrior Gene”. The behaviors include anger, being anti-social, taking more risks, etc. However, human beings are a strange mixture of nature and nurture. So, science has a long way to go when it comes to explaining the role of our genetic makeup and the behaviors we exhibit. And yes, even vice versa.

All in all, the Assassin’s Creed DNA Bundle does sound interesting. It might just give you the proper excuse you need when trying to explain to the people you know that you’ve always been genetically destined to become some sort of warrior prince/princess or an assassin in this case.

Assassin’s Creed live action film, starring Michael Fassbender, will be released on the 21st December 2016. Fassbender also produced the film. Furthermore, the cast includes Marion Cotillard. Though I haven’t played the games myself, I know a lot of people who have. Fans of the franchise do look excited about the live-action adaptation. They’ve been looking forward to it for a long time. Let’s see how the film is received next month.

What do you think of the “Warrior Gene”? Are you a fan of the Assassin’s Creed franchise? Will you be watching the upcoming film? Share your thoughts with us.

Previous:‘Aftermath’ Releases Sneak Peek for Episode 7 “What the Thunder Said”