Authorial Intent Versus Audience Interpretation: Whose Voice is More Valid?

The realm of art—whether it be literature, music, digital, or any other form—is a fascinating illustration of perspective. A scene can be interpreted as either romantic or menacing; a character can be praised as heroic or condemned as imperious; themes can range from the universal struggle between order and chaos to being completely non-existent. Such contrast in opinions inevitably spawns debate about who’s interpretation is correct—sometimes in good nature, sometimes (unfortunately) in much more insulting tones, and sometimes while totally disregarding the author’s* intended message. So what happens when an author says, “No, I didn’t mean X in my work. I meant Y,” and this goes completely against one’s personal viewpoint, or even a largely accepted viewpoint among the fandom? Has the author invalidated this interpretation?

As fans, we can get so wrapped up in our own conceptions about a work of art that we either fail to consider the author’s intensions behind it, or even go so far to declare the author’s message to be wrong. However, even though one can write meta upon meta and gather up stacks of “irrevocable proof” to support one’s perception of an artistic work, one can’t overlook the simple fact that the authors are the authors, not the audience. It’s their work: they get to declare what its meaning is intended to be. For example, people have interpreted The Lord of the Rings trilogy as an allegory for both the atomic bomb and World War II as a whole. Tolkien denied both of these, rejecting all allegory out of hand, in fact, by saying, “I think that many confuse applicability with allegory, but one resides in the freedom of the reader, and the other in the purposed domination of the author.”** 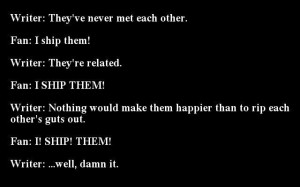 So, does this mean that all meta writers should cease their activity, and the general audience must pack away their opinions to receive instructions from up on high? Of course not. Everyone has the right to the interpret an artistic work as he or she wishes. The trouble arises from the fact that people (authors and audience alike) can fixate on the “purposed domination of the author” portion of Tolkien’s quote and ignore the “freedom of the reader” part. An author wants his/her work to be seen as he/she envisioned it; a fan isn’t satisfied with his/her view being a valid “interpretation”–he/she wants to be right.

This is completely understandable, of course—what fan doesn’t enjoy having their opinion validated, and who’s to deny an author’s intent? However, in obsessing about being correct, people are in fact trying to apply scientific standards to art, to find the One Truth and be declared an undeniable law that sweeps aside all the lesser hypotheses. That simply doesn’t work. An engineer cannot choose to interpret physics a certain way when constructing a building, lest he or she wishes to risk having the structure collapse. A star can metaphorically shakes its fist as a black hole draws it in, but that won’t change its fate. 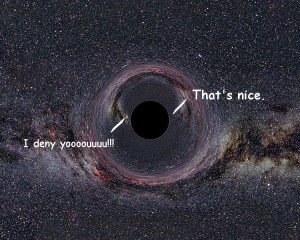 On the other hand, there aren’t any dire consequences from varying interpretations of a work of art. The graphic novel, The Watchmen, doesn’t spontaneously combust depending on whether one sees Ozymandias as a misguided hero or a pure villain. Sherlock doesn’t glitch into oblivion depending on whether or not one considers Johnlock to exist. Entire genres of movies, music, or animation styles may be either dismissed as garbage or worshipped fanatically, and yet the genres continue to thrive. This is true whether the contrasting views are between audience members, or between the audience and the author, because there simply isn’t a One Truth upon which the reality of art relies.

Yes, authors have the right to state the meaning of their work, but the luxury of art is that the audience can still pull an Adam Savage and answer, “I reject your reality and substitute my own!” Mass Effect 3 is a perfect example—even after the release of the reworked ending, a portion of fans still went, “Nope, Indoctrination Theory!” and sailed away into the Happy Land of Head Cannon. The author and the audience can try to show each other how to see the work as they themselves do, but this doesn’t guarantee either party will adopt the other’s viewpoint, nor will it erase the viewpoint they held in the first place. The author cannot take away the audience’s freedom to interpret, and the audience cannot seize the author’s creative dominion. Perspectives cannot be enforced, after all; they can only be offered.

Rather than be a source of frustration, this dynamic is something to be celebrated. Authors can see how their work affects people in ways they never expected, and audience members can choose to view creative work in a manner that suits them. Both parties are richer for that. So hold on to your ships and your head canons, fandom. They are yours to enjoy, and can never be taken from you. And keep blessing us with your talents, authors. Our souls would be far more empty without you.

* For the purposes of this article, I use the word “author” to refer to a person who creates any form of art, regardless of medium (books; movies; video games; paintings; music; whatever.)

** Note that there’s a difference between this and an author dropping hints about a certain view being valid, and then going, “Psych! Not true, never going to be.” A HUGE difference. That is another article entirely, however, so please bear that in mind while reading this.