Fandom Wants to be Heard and Orlando Jones is Listening 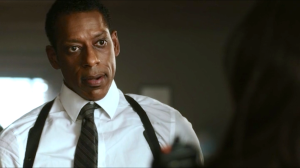 Actor Orlando Jones completely destroyed any vestige of the fourth wall when he dove head first into the Sleepy Hollow fandom. Jones has embraced, and in turn been embraced, by online fandom wholeheartedly to an extent that has not really been experienced before. Despite the overwhelmingly positive response to his involvement in fandom many critics have simply been waiting for fandom to push too hard.

This is not an unfounded fear, many media personalities have attempted to engage with fandom only to run and hide the moment things got a little bit difficult. After a problematic tweet resulted in a fandom uproar it seemed as though Orlando Jones might have reached that point but things took an interesting turn when Jones chose to directly address the problem.

In a lengthy response on his Tumblr, Jones explained his intention and apologized for causing offense. I’m not going to respond to his argument because I do not possess the necessary knowledge to present an informed opinion on the topic but I do want to talk about the way Orlando handled the situation and the response from fandom.

Please note I am not trying to excuse or defend what Orlando Jones said nor am I invalidating any offense it caused. Offense is offense regardless of intent.

The apology itself is not without its problems and like many before him Jones needs to appreciate the difference between apologizing for causing offense and apologizing for being offensive. Despite this, his post was extremely well received within fandom and even those that did not agree with Orlando’s argument were impressed by his decision to respond respectfully to criticism.

Even more interesting was the fact that Jones responded to criticism of his response. After a number of a people pointed out that his comment about “giving/taking” offense was problematic Jones edited his post for clarification:

“A number of you wrote to me personally to offer encouraging words about this essay and then point out that my last statement about offense invalidated my previous points since I was essentially blaming others for saying something offensive. To clarify, I didn’t say (nor do I mean) that if people were offended it was their fault. It was not my intention to offend and I apologize to those I offended. What I do mean, however, is that while what is or isn’t offensive can be subjective my intended meaning did matter here and basically no one took the time to ask me that before assigning blame to me. Again, I appreciate this forum and always value thoughtful and constructive feedback even if we don’t agree.”

While this response is still not perfect, the very fact that he actually acknowledged his mistake without getting defensive is almost unheard of and he has been rewarded by rush of support from fans. He even went so far as to submit himself to “Your Fave is Problematic” a Tumblr blog dedicated to calling out celebrities on the problematic things they have said or done.

We have watched so many people flounder when faced with similar situations, so it was astounding to see how easy it was for Orlando to regain fandom’s favor. Orlando Jones said something offensive, he acknowledged this, explained his intent and apologized for offending. He then listened to and accepted criticism of his response and added further clarification.

The fandom response was a respectful and interesting discussion of both the topic at hand and Orlando’s handling of the situation followed by a return to general appreciation of Sleepy Hollow and Orlando Jones. Of course now a large part of the fandom is more aware of, and is more informed on, an interesting issue.

This is fandom at its best. Genuine criticism that sparks intelligent discussion and as a result informs and educates a large group of people on a topic they would have otherwise been ignorant of. This is why it is so frustrating that the default response to fandom complaints is, as Tumblr user acafanmom put it, to “[retreat] behind a wall of ‘that’s not what I meant,’” or invalidate the complaint by accusing fandom of over-reacting.

As I said above, Orlando Jones’ response wasn’t perfect but at least he took the time to listen to us rather dismissing fans criticism as a personal attack. TPTB, celebrities and PR departments are running around like headless chicken desperately trying to figure out how to talk to fandom when all they really need to do is listen.

A few weeks before the recent kerfuffle, Orlando Jones posted a link to an article I wrote about Teen Wolf social media with a series of questions about engaging with fandom. The responses were varied but one common thread shone through – fans just want to be heard. As Tumblr user mynuet wrote:

“the secret to success is realizing that social media isn’t a monologue… Producers don’t have to respond to everything fans want – and shouldn’t, lest they try and fail to be all things to everyone – but if the vast majority of your fanbase is repeating the same issues, listen.  They are explaining to you, in advance and for free, what’s going to lead to audience attrition, lower ratings, cancellation, and the need to brush up on resumes.”

Listening isn’t very difficult and contrary to popular opinion, listening to fans does not mean compromising on artistic vision. It’s pretty clear that this was what Orlando was trying to do with his response this week – whether or not he succeeded is for you to decide (I think he did pretty well). Taking a leaf out of Orlando’s book and treating fans like actual people could have prevented so many PR failures. All they have to do is acknowledge the issue and respond in a respectful manner, preferably without dismissing it at a joke.

It is possible; Bryan Fuller proved that when he did the inconceivable at San Diego Comic Con earlier this year by responding respectfully to slash fans, while clearly stating that the relationship was not going to happen. He didn’t dismiss or bait fans interpretation, and the fandom was fine.  In fact the Hannibal fandom is only getting stronger.

If Orlando Jones and Bryan Fuller can do it, why do we keep making excuses for everyone else?

As a final note I feel like I should officially welcome Orlando to fandom because what he went through this week is something that most fans experience at some stage, albeit on a much smaller scale. Most fans I know, myself included, have said something unintentionally offensive at some point and then had to deal with the fallout, and the same could be said for the Sleepy Hollow fandom.

It’s not easy, fandom is not a particularly forgiving community and the desire to stick your head in the 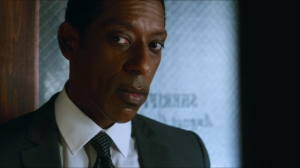 sand and ignore the whole thing is incredibly tempting. But in this is an important rite of passage in fandom because it’s how we learn to own up to our mistakes – it’s kind of hypocritical to criticize someone else when we can’t take criticism ourselves. Not everyone makes it past this point, so congratulations on clearing this hurdle, Orlando, we look forward to engaging with you more in the future.

Previous:Doctor Who Review: The Night of the Doctor
Next: Webseries Recommendation: Adult Wednesday Addams