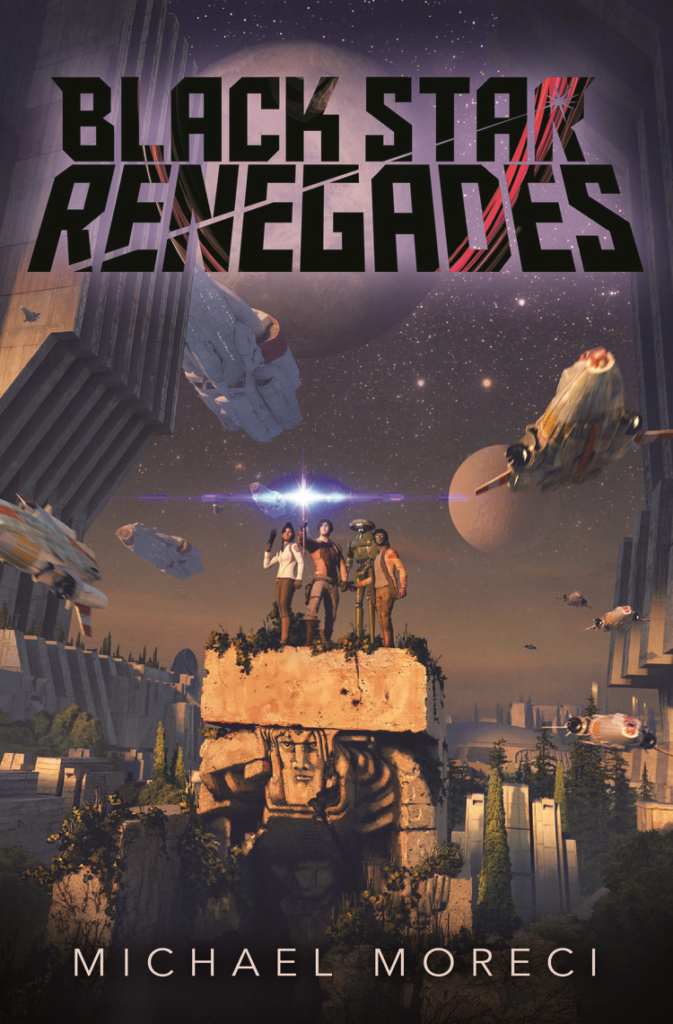 The galaxy is in chaos. Praxis is on the brink of complete control, and only the Paragon can save the day. The problem is, the Paragon is dead. Black Star Renegades is the story of Cade Sura, whose dead brother was the galaxy’s one hope. Armed with a weapon that only his brother can wield, Cade finds himself navigating some very dangerous waters as he struggles to find his place in a world torn apart by war.

I’d heard good things about Black Star Renegades, the debut novel from comics writer Michael Moreci, and I wanted so badly to like it. Described by the author himself as his love letter to Star Wars, it certainly seemed right up my alley. It’s hard for me to put my feelings about this book into words. I didn’t dislike it per se, but it’s difficult not to be disappointed when you put so much hype onto something; it almost never lives up to the expectations.

My biggest issue with Black Star Renegades is that it very much feels like a comic, but without the beautiful art that comes with it. The story is fast-paced, bouncing from plot point to plot point quickly, without giving you much opportunity to think about what you’re reading. As such, you’re left with a whole bunch of twists that lack punch because you’ve spent no time dwelling on them. The biggest plot moment for me happened early in the book – the death of Cade’s brother, Tristan. This is one of the few moments in the book that actually lingers. The story is largely narrated from Cade’s point of view with only a few switches for key information, and Cade is deeply affected by Tristan’s death. It seems to be one of the only things anyone in this book is affected by.

If you want a good, old-fashioned space romp that’s full of action and comedy, then you’ll probably love Black Star Renegades. You can definitely spot all the homages to Star Wars, though Moreci seems to have pulled back slightly from flat-out copying elements. This book is very style without substance, which isn’t always a bad thing. Books are, after all, meant to entertain, and I think a lot of people will thoroughly enjoy this book. It’s got a good story and interesting characters, even if they are sort of cardboard cutouts.

But I like depth. I like character development and world-building, and this book is sadly lacking on both of those. The writing at times is awkward, the dialogue isn’t so much awkward as it is clearly meant to be in comic book format, and this expansive universe has been created but I have no idea how any of it looks. (Except for Kyysring, which is clearly meant to be Tatooine, so that’s how I imagined it.) Once I got to the end, when I should have been riveted, I found myself skimming large paragraphs, and then having to go back and try and figure out what I read.

In short, it isn’t that I didn’t like Black Star Renegades. I just found it kind of…”meh”.

Black Star Renegades by Michael Moreci is published by St. Martin’s Press and is currently available wherever books are sold.

Author’s Note: I received a copy of this book from the publisher in exchange for an honest review. All opinions are my own.

Previous:Attack on Titan Humble Bundle: Pay What You Want for Over $500 of Manga
Next: Vikings 5×09 Review: A Simple Story