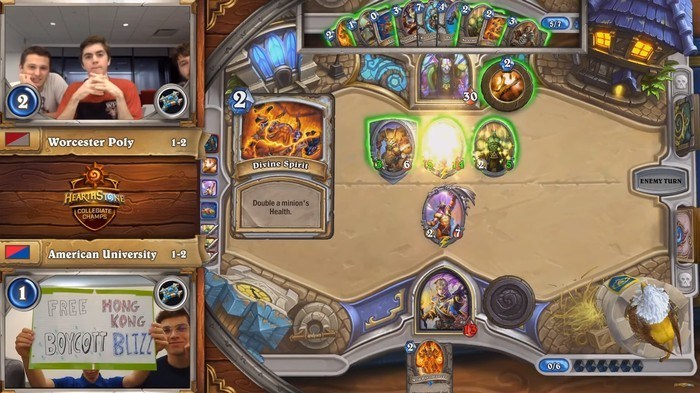 The college team that held up pro-Hong Kong democracy signs during a game live stream has been suspended for six months, matching the suspension of Blitzchung and the casters who sparked the controversy last week.

After Blitzchung was suspended for a year and had his prize money taken away for expressing pro-Hong Kong protester sentiments in a livestream, fellow gamers came to his defense.  The day after the event, a Hearthstone college team from American University held up a sign during a stream that read “Free Hong Kong, Boycott Blizz.”  Blizzard ended up walking back their severe punishment of Blitzchung, giving him back his prize money and reducing his suspension to six months, but the American University team seemed to slip by unpunished by Blizzard.  Until now.

In an email, Blizzard states that the college team violated rule 7.1B of the Hearthstone Collegiate Championship Fall 2019 Official Rules.  One of the team members, Casey Chambers, posted the text of the email via Twitter.

Happy to announce the AU Hearthstone team received a six month ban from competition. While delayed I appreciate all players being treated equally and no one being above the rules. pic.twitter.com/mZStoF0e0t

The team had already decided they weren’t going to compete in their next scheduled match, so the blow is slightly less jarring than it was for Blitzchang.  It’s also weirdly reassuring that their rules, even if I strongly disagree with them, are being applied equally to everyone.  The team seems to be taking it in stride as well.

“We knew exactly what we were doing,” Chambers told Vice. “No regrets.”

Blizzard hasn’t made any more official statements since their Friday news dump press release, but they did cancel a scheduled Overwatch event, possibly out of fear of a hoard of pro-democracy Meis showing up to protest.  No official reason has been given at this time.  Regardless, Blizzcon is going to be interesting no matter how you slice it.

Will you be attending Blizzcon?  Reach out!  We’d love to see what’s happening at the con.