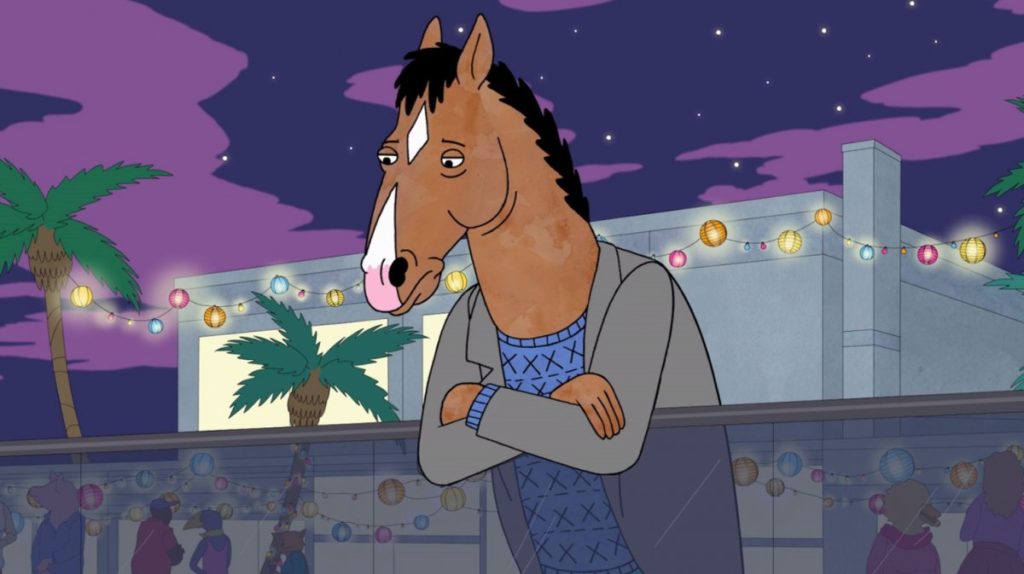 Listen, the first half of the first season of BoJack Horseman is really, really hard to get through. And to be honest, there are parts of the third season that are difficult to watch as well. But as a whole, the payoff is worth it. Trust me on this.

BoJack Horseman takes place in a world of anthropomorphic animals who interact and have relationships with humans, and yes, that takes some getting used to. Honestly, I’m not sure I ever did. It was particularly jarring in the first half of season one, but the more I watched – and the more I learned about the characters, the more they grew and changed (for the most part), the easier it was to lose myself in this strange, hilarious, and sometimes even moving world. 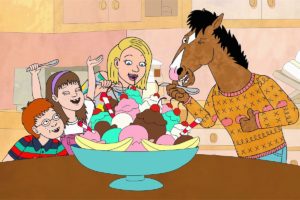 BoJack himself is the washed-up star of a 90s sitcom called Horsin’ Around, in which he – a horse – adopts and raises three human children. When you meet him, it’s present day, and he’s a hard-drinking, paunch-bellied character who’s sarcastic past the point of being an asshole.

I can’t say it enough – you have to get through the first half of the BoJack Horseman season one. It’s frustrating, but it takes the show that long to find its stride. Once it does, though, it’s as binge-worthy as so many other Netflix shows…if you’re looking for something amusing and willing to pay attention to not just the in-your-face jokes but the subtle ones, as well. On top of that, this is a show that explores mental illness and loneliness in a refreshingly honest way that almost belies its general subject matter. To put it simply: it’s smarter than it seems at first, and then smarter than you could ever hope it to be in the end. 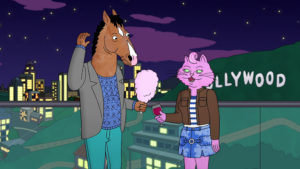 Sometimes chuckle-worthy, sometimes offensive, sometimes heart-wrenching, and sometimes downright hilarious, BoJack Horseman is one of those Netflix originals that was perhaps ahead of its time – until time caught up with it. The second half of the first season is great, the entire second season is a gem, and the third season is different and yet wonderful. Yes, I’m being vague, but that’s because I don’t want to spoil anything – after all, last we knew they were planning a fourth season for 2017. And yes, they have plenty of fresh material for that fourth season…I know I can’t wait for it!

Seasons one through three of BoJack Horseman are currently available on Netflix, and include the voice talents of Will Arnett (Arrested Development, 30 Rock), Alison Brie (Community, Mad Men), Amy Sedaris (Strangers with Candy, Unbreakable Kimmy Schmidt), Aaron Paul (Breaking Bad), and more. If you can get through the first four episodes – trust me, it’s worth it – you won’t be disappointed!