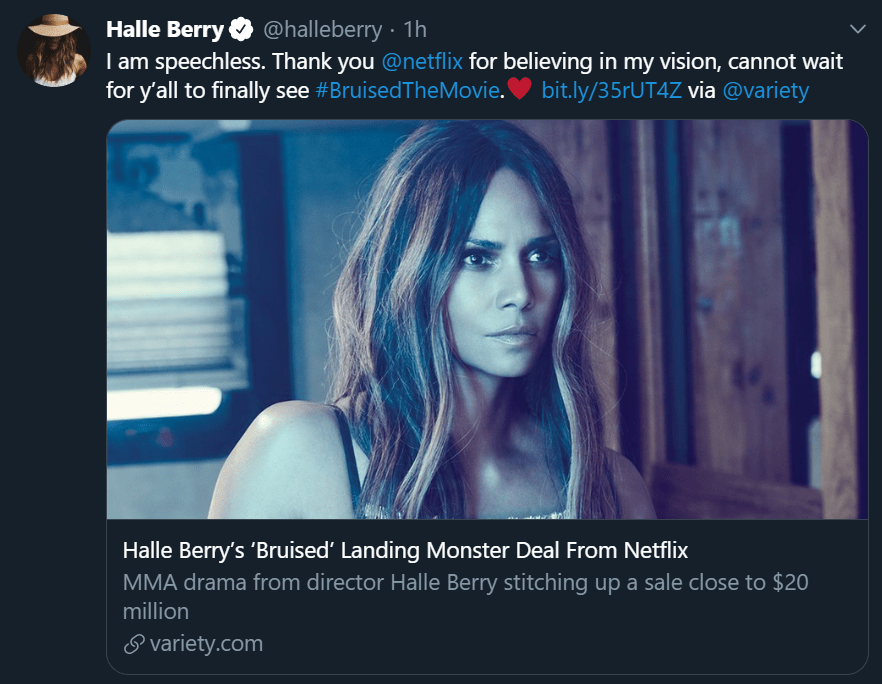 In news that made me very happy, Deadline was the first to report that Netflix is working to acquire Halle Berry’s directorial debut Bruised by putting forward a mega deal. I can’t wait to see what Berry has in store for us with her upcoming film.

Even though TIFF 2020 had to change due to the current pandemic, the festival is still showcasing some major talent. One of the exciting titles at this year’s Toronto International Film Festival is Bruised. Of course, the directorial debut of a Black Oscar-winning actress who has been part of the industry for decades was going to cause industry chatter.

I was ready to wait until Bruised screened for the attendees of TIFF 2020 to see what the critics thought of it. However, it looks like Netflix loved what Berry had to offer. According to reports, the streaming giant got a preemptive look at the film and went to work on hammering out a deal to snatch the film away from other buyers. Apparently, the deal for the worldwide rights to Bruised (the film’s being shown as a work-in-progress) is close to $20 million. Wow!

Netflix and Endeavor Content are said to be closing the deal.

Considering Berry’s legacy in Hollywood, I had been wondering when Netflix would begin working with her. Perhaps the current deal is the streamer’s way of booking her for more roles? We will have to wait and see.

As for the film itself, the premise deals with Berry’s character Jackie Justice (an MMA fighter) trying to find redemption in her life and career once her 6-year-old son Manny returns to her doorstep.

We know Berry can deliver emotional performances when playing a mother (Monster’s Ball, and Losing Isaiah) and we know she can deliver action (the X-Men films, 007: Die Another Day, and John Wick 3).

The script has been written by Michelle Rosenfarb. The original was about a young white woman. But Berry decided to change things up. She’s been known to do that very early in her career when she wanted to play Miss Stone in 1994’s The Flintstones. She convinced the creatives how the fictional world of Bedrock needed diversity.

A cast member of Bruised, Sheila Atim, has also been getting a lot of praise. So, I’m looking forward to seeing her.

Do you think Netflix will decide to release Bruised by this year or early in 2021 as a potential Oscar contender?

While we wait, I urge you to read Berry’s latest interview with Variety. She talked about being a WoC in Hollywood while going over her wins and hardships in a career that spans decades.

Berry’s next project will see her starring in Roland Emmerich’s world-ending sci-fi movie titled Moonfall. Production will supposedly begin later this year for a 2021 release date.