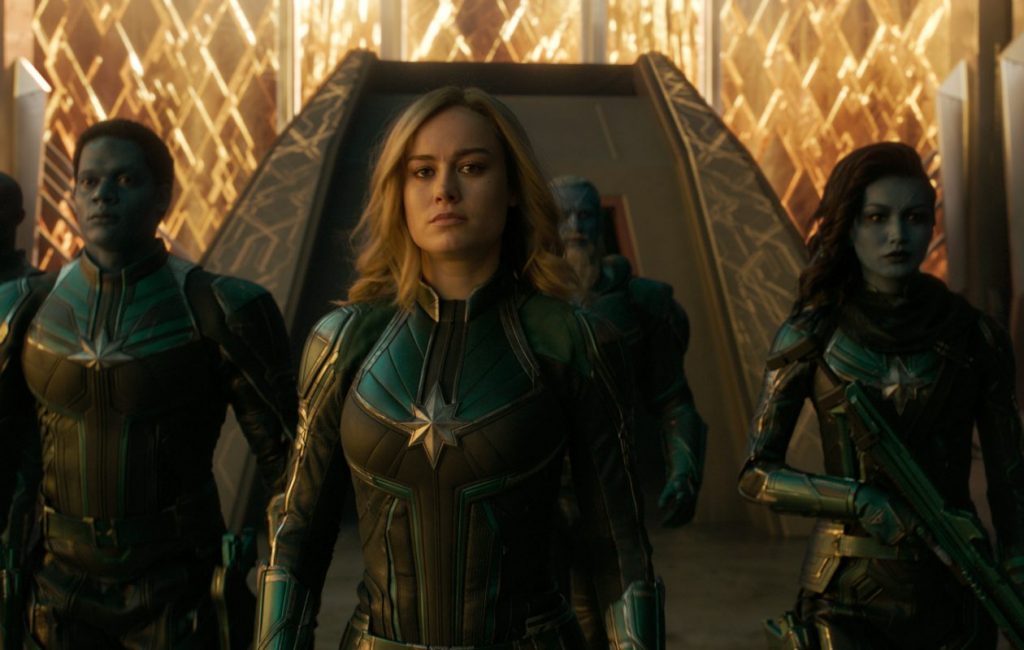 Captain Marvel is everything I could possibly want from a film that shattered the glass ceiling of the MCU.  It’s both an origin story, as well as a film about empowerment.  I could not imagine it any other way.

WARNING: This Captain Marvel review is NOT spoiler free.  This is intended for those who have already seen the film.

Much of the hype – and controversy – surrounding Captain Marvel comes from the very obvious glass ceiling it’s shattering.  The cast hasn’t shied away from discussing the fact that this film is meant to empower women and lay the groundwork for more woman led MCU films.  In particular, Brie Larson has been vocal about the films intentions.  She angered whiny men everywhere when she dared to request a more diverse pool of reporters on their press tour, causing tons of negative reviews to flood Rotten Tomatoes.  It’s telling that her desire for inclusion of many voices made certain men feel like a statement of exclusion for men.  If they aren’t the majority, they feel attacked.  But it’s time to get used to it, guys.  The MCU is for everyone and Captain Marvel drives that point home.

The main plot of the film doesn’t focus on gender dynamics, but it’s still ever present.  Carol Danvers is a woman who pushes boundaries and became a fighter pilot in the late ’80s.  While the line “there’s a reason it’s called a cockpit” might feel heavy handed, it’s absolutely part of the experience of being a woman in a male-dominated environment.  I heard similar things when I chose to pursue a film degree in college, which was largely male-dominated.  There were times I was the only woman in a classroom.  The plot doesn’t have to touch on it as a key element because Carol Danvers simply existing as a woman is enough to highlight the treatment women get when they pursue a dream that doesn’t fit gender norms.

Needless to say, this film passes the Bechdel Test.  Repeatedly.  Whether it’s conversations with her fellow fighter pilot friend, her friend’s daughter, or Doctor Lawson, there are numerous conversations between women that have nothing to do with men.  According to one blog, only about half the MCU films have passed this simple test.  While there are plenty of women heroes, a lot of them are either the only ones present in a scene, or have their conversations surround what the men in the film are doing.

The plot is very much an origin story, and it comes with many of the pitfalls that plague all the other origin stories in the franchise thus far.  In a way, that also speaks to the equality that’s sorely needed in the MCU.  Even women can have a flawed origin story film. It’s nothing new, but as the ‘first’ of something so major, it’s bound to be scrutinized for these issues even more severely than its predecessors.  But as far as origin stories go, it was still an enjoyable one and if you get past the extreme amount of hate the film is getting, you might be able to actually appreciate it for what it is.  This is the story of a woman who has always fought to pursue her dreams, even when told she shouldn’t. 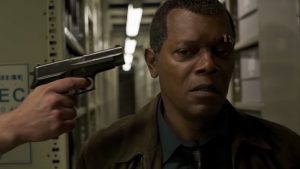 Unlike many of the other hero origin stories, Captain Marvel opened itself up for tie-ins a lot easier, which sometimes felt more heavy handed than anything having to do with Carol’s gender.  We react with pleased gasps of recognition when Coulson appears on the screen or the Tesseract is revealed.  We’re in the Marvel Cinematic Universe and we can’t forget that.  At the same time, with Avengers: Endgame lurking around the corner, the nods were kind of a relief.  Our grief from Avengers: Infinity War still feels fresh and a side trip to the 90’s could have very much felt out of place.  But I feel they managed it well and I’m grateful they chose Captain Marvel to bridge the gap between Avengers installments.

Despite the angst surrounding the current ongoing story of the MCU, Captain Marvel managed to be an incredibly fun film with many light-hearted moments.  Most of these moments come from Nick Fury.  Samuel L Jackson’s chemistry with Brie Larson is incredible and they mange to develop an interesting Buddy Cop dynamic in a very short amount of time.  He was an excellent choice to pair with her, both for the plot and the dynamic it brings.

Fury’s relationship with Goose is also a highlight.  Who knew that Agent Fury was a cat guy?  He’s constantly distracted from their very serious mission by his overwhelming need to show the ‘kitty’ some love.  When it’s revealed the kitty is actually a Flerken, his reaction is priceless.  He’s a bit bewildered, but embraces it because he’s sort of bonded with the creature.  He bonded with him enough to essentially adopt him as his office cat.  Visitors to Fury’s office just have to get used to the fact that Goose is there.  People with cat allergies should just stay away. 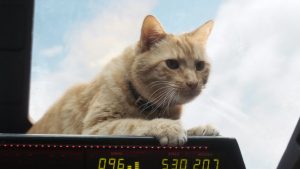 Side note: the final post credit scene?  As a cat mom, I’ve been woken up many times by the sound of a cat puking somewhere in the apartment.  I could immediately tell who in the audience were cat parents because from the first moment he started to gag, they groaned and flinched away from the screen.  We know that sound.  We know what’s coming.  He may be a Flerken, but he’s a damn house cat, too.

Speaking of the end credit scenes, the first one elicited a large reaction from the audience I was in.  We knew from the post credit scene in Infinity War that Captain Marvel was called to help, but now we get to see what is likely the first time she’s meeting the remaining Avengers.  It’s complicated, though, because it feels like their first meeting would be pivotal to the plot of Endgame.  Will they skip the scene where they meet entirely in Endgame?  How will she come into play?  True Marvel fans know they need to stay until after the credits for the full experience, but it still feels weird to have such an important moment not within the film itself.  But I guess we’ll see. Endgame is only two months away, so we don’t have long to wait.

Overall, this film was exactly what I wanted from a precedent-setting film.  Hopefully it wont be the last woman-led installment in the series.  It shattered the ceiling so that others may follow.  We’ve been circling the Black Widow film for years, and now the door is open for not just Natasha Romanov, but many others to walk through.