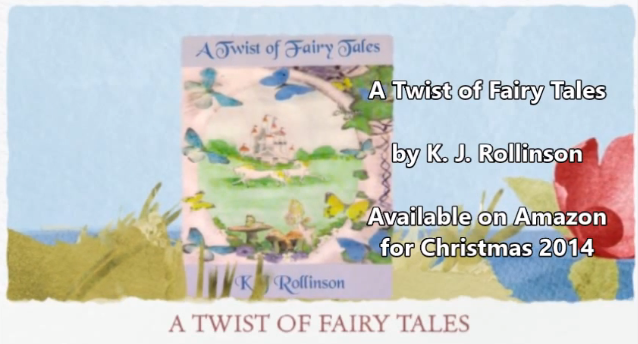 Today I have the talented K.J. Rollinson with me in an exclusive interview with The Geekiary! As the author of a number of fantasy books, we talk about her current and upcoming works, her inspiration and more!

Tell us a bit about yourself. When did you get into writing?

KJ: I have written since I was a child, both stories and poems. […]The first poem I wrote was called “Pictures in the Fire”.

I was born in Salford, Lancashire, UK and moved to Wales, aged 12, and also lived in Berkshire, UK. Despite leaving school without any qualifications, I gained A levels and professional awards through the ensuing years. I carved out a career and worked for many years for the National Health Service, taking various positions with health authorities within England and Wales, but now I live in Spain.

My short stories have appeared in various anthologies and magazines, including Shorts for Autumn, the winner of the Writing Magazine 2012 Anthology.

Any authors that have inspired you?

KJ: My parents were avid readers and I used to read all their books, as I was not allowed to read comics. One book I was very impressed with was The Bondsman by Sir Hall Caine, a very popular 19th century author. Nowadays, when I am not busy writing my own books, I read mostly Lee Child, James Patterson, Tess Gerritsen.

I’m familiar with your enjoyable Fallyn series. What made you decide to write a story that uses dragons in the way you did, sharing their perspectives with the readers? 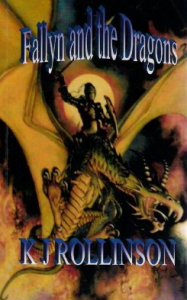 KJ: I wrote an article for the Writing Magazine, the most popular UK writing magazine, and I quote you an extract below to explain my interest in writing about dragons:

EVERY PICTURE TELLS A STORY

This is exactly what happened when I wrote my first novel, Fallyn and the Dragons.

I had attended my art class and a colleague had drawn a beautiful picture of a very proud dragon perched on a rock, with half-furled wings. The original picture portrayed a snarling dragon, but in her interpretation, the snarl looked more like a half-smile. I loved it. For me, the story of [Saint] George and the Dragon had always given dragons a bad press. I decided to write a 500-word story for her which, more or less, is repeated as chapter two in the book. Most of the dragons in my novel are ‘goodies’ but inevitably there are some evil ones as well. I found the characters of Fallyn and Solo the dragon invaded my dreams, and before I knew it, the 500-word story had grown to 48,000 words.

Since I wrote the above, I have written the second and third books.

You also went into the mystery genre with The Rode to Justice. Your other works fall under fantasy. Are you planning to dabble in mysteries again?

KJ: Maybe I’ll write a crime book again, I don’t know at the moment, because I am very busy writing Where Lies My Heart which has action, adventure and romance. I’ve already written 71,000 words. I give the synopsis below:

Against an exotic backdrop of war-torn East Africa, Where Lies My Heart charters the life of Ian Cornwell, from a boy to a man.

Even as a young boy Ian is drawn to help his fellow man. His strength of character, however, has one flaw – his weakness? – women. A handsome man, he attracts women like flies to a honey pot.

Following two disastrous affairs, he goes to East Africa. Here he meets a woman he truly loves only to lose her. His one regret all of his life that he never told her he loved her.

Together with an Eritrean family, who befriend him, he flees from the despot Eritrean government only to find their situation worsens.

The rich tapestry cleverly weaves fact and fiction in a fast-moving plot. Traversing a vast panorama from the suburbs of Birmingham, UK, to East Africa, through the countries of Eritrea, Sudan, crossing the Red Sea to Saudi Arabia, and Egypt. The story encompasses the traditions and beliefs of different cultures, including female circumcision, still practiced in many parts of Africa.

Filled with exciting action, I hope Where Lies My Heart will thrill readers and make their imaginations and hearts soar.

Tell us a bit about A Twist of Fairy Tales. The title sounds really interesting!

KJ: A Twist of Fairy Tales was inspired by Joy Lennick, the leader of a writing group I belong to. She asked us to write a modern fairy tale based on Little Red Riding Hood. My story is called “Little Scarlet Hudson.” From this, A Twist of Fairy Tales grew. There are nine tales in the book with illustrations. Some are based on old classics, but with a modern twist, and some are completely new. The book is aimed at children 6 – 10 years.

What kind of message do you wish to convey to your readers through your work?

KJ: I don’t consciously think I convey any message to readers. Although one reader of my Fallyn books said he thought they had a moral tone to them. Perhaps, this is because Fallyn and his friends overcome evil.

Being a published author yourself, any advice for aspiring writers?

KJ: Magazines are full of advice to writers – the environment to write in, what time of the day, write in longhand or on the computer. Horse for courses I say.

My advice to aspiring writers? Join a writing group, preferably one that encourages publication such as one of the groups I belong to in Spain, Wordplay Writers’ Forum. Get an editor if you want to publish. This is most important if you are a self-publishing author. All too often I see indie authors letting the side down with grammatical errors.

You can get to know more about K. J. Rollinson and her books by visiting her website. You can also connect with her through Facebook or follow her on Twitter. You also check out the YouTube videos for the Fallyn Trilogy and A Twist of Fairy Tales.

Have you read her books? Let us know!