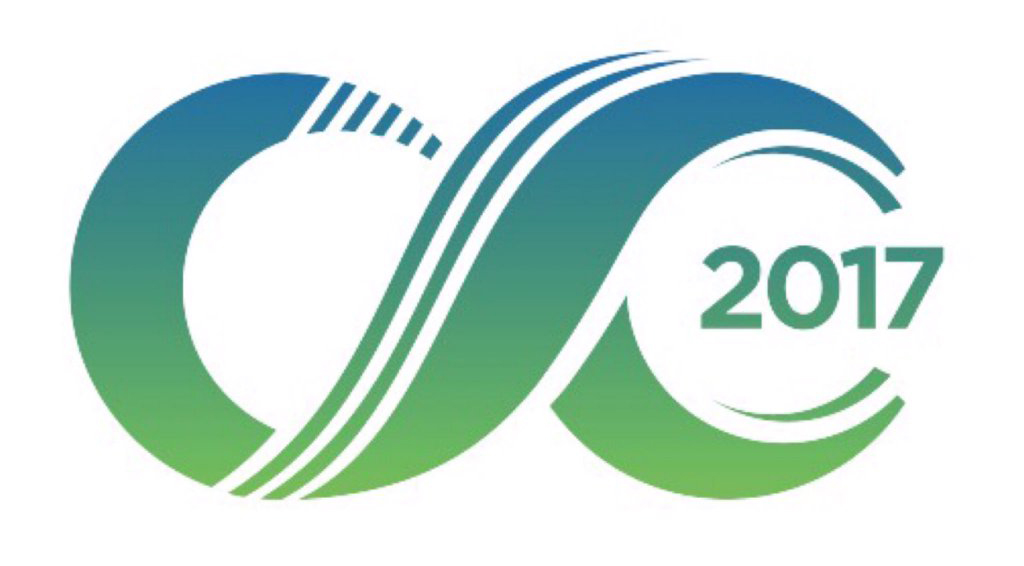 Earlier this year, Las Vegas welcomed the first edition of ClexaCon. To be honest, it has taken me a while to write this article because ClexaCon is unlike any other convention I have attended.

In case you have not heard of ClexaCon, it is a convention for the female LGBTQ+ community and its allies. The name comes from the famous ship “Clexa” (Clarke & Lexa) on the show The 100. On March, 3rd, 2016, lesbian Commander Lexa was killed by a bullet minutes after consuming her relationship with bisexual lead, Clarke Griffin, thus checking all the boxes of the “Bury Your Gays” trope. This heartbreaking moment led the organizers of ClexaCon to create one of the first conventions geared towards LGBTQ+ women with the aim to bring positivity into the community.

ClexaCon had a quite a variety of celebrity guests who are playing or have played LGBTQ characters on screen: Amy Acker & Sarah Shahi (who never does conventions, so kudos to the organizers for booking her!) from Person of Interest, Dominique Provost-Chalkley, Kat Barell & Emily Andras from Wynonna Earp, Natasha Negovanalis & Elise Bauman from Carmilla, Zoie Palmer (probably the funniest person you’ll ever meet) & Rachel Skarsten from Lost Girl, Mandy Musgrave & Gabrielle Christian from South of Nowhere, Jasika Nicole from Fringe, Ali Liebert from Bomb Girls and many more. 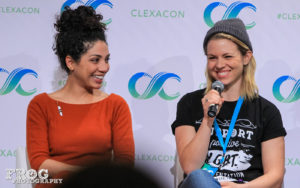 On top of celebrity actors, ClexaCon planned panels covering a wide array of subjects: “Queerbaiting vs Queer Subtext”, “Year in Review”, “Lexa’s Legacy”, “Ethics in Storytelling”, “Bisexual Representation in the Media”, “Diversity in Comics”, “Podcasting your Passion”, “The Power of Queer Social Media”, “Queer Lady Business”, “Why Representation Matters”, “Breaking into Print”, “Transgender Representation”, and “Visibility and Asexuality”, among others. Our very own Tara Lynne hosted and spoke on several panels like “Queer Representation in Steven Universe”, “Crowdfunding in the Geek Community”, and “Writing with Style & Diversity”.

No matter your sexual identity or gender, you could always find a panel that spoke to you.  The panel “Queer Women of Color: Representation in the Media” was such a big hit that they continued it in the main room after the end of programming. Grey’s Anatomy‘s Sara Ramirez, who went to ClexaCon on the last day as a regular attendee, unexpectedly participated in this panel and shared her experience as a bisexual actress. 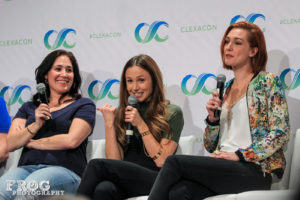 My favorite guest of the convention had to be Emily Andras. For those who do not know her, she is the showrunner of Wynonna Earp and was Lost Girl‘s showrunner for seasons 3 & 4. With both shows exemplifying very good LGBT representation, Andras is quite popular in the community.  She spoke several times during her panels that she had to fight and compromise with The Powers That Be to be able to write same-sex relationships on her shows but that she did it because she knows how important it is. Last year, shortly after Lexa’s death, many fans turned to Wynonna Earp for its lesbian couple nicknamed WayHaught but they were scared that the Bury Your Gays trope would strike again. Andras, in an unprecedented move, revealed on Twitter several weeks before the season finale that neither Waverly nor Nicole would die at the end of the season and that fans could watch the show without fear of losing yet another queer character.

On Twitter, user Moonie said “Seeing all the celebs is great but the experience of being in this environment with others who love what you love and to feel safe – the best!” I fully agree with her. While meeting Amy Acker & Sarah Shahi was a dream come true, being able to hang out with my queer (and one straight) friends without feeling like the odds ones because of who we are, our views, or who we ship was priceless. As cliché and stereotypical as it may seem, walking towards the convention hall and gradually seeing more and more women wearing plaid shirts was a great “I am with my people” kind-of moment. 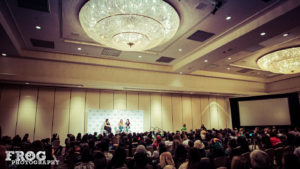 It’s a feeling that many attendees shared. It was the first time for most of us where we truly felt safe to fully be ourselves at a convention. Going to a comic con is usually a great experience because everyone is celebrating their geekiness together, but sometimes it’s hard to express our opinions when they don’t fit the heteronormative view of society at large. For example, even at a convention for The 100, I sometimes did not dare to say that I was shipping “Clexa” because of the behaviors of fans of the non-canon straight ship “Bellarke”. It felt safer to remain silent than to have to endure a lecture on why their ship is superior (I am not generalizing Bellarke fans but I have been on the receiving end of such actions before). At ClexaCon, we were all aware that many of us had painful experiences related to our sexuality or gender identity. I believe it truly is what made us bond over these 3 days. I have met people who shared their stories, both sad and happy, with me and I could not be more grateful to them as it helped me to understand myself and others better. Also I have to admit; being able to freely fangirl about the awesomeness of the Wynonna Earp ladies with hundreds of other women, non-binary people, and male allies was very liberating. Every ClexaCon attendee was respectful of others, whether in lines, with the guests at photo shoots or during the panels. The whole convention was very inclusive and everyone felt welcomed. Yes, even straight people. One friend in my group is straight and ClexaCon was her first ever convention. She really enjoyed it and is planning to come again next year. 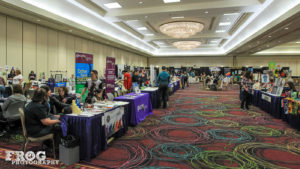 Besides the guests and the panels, ClexaCon had a small but very good merchandise/artists alley. People familiar with the Clexa fandom could find artists like Papurrcat or Immochiball at their table. Gum Shoe Geek was also there to sell her famous Heda & Wanheda snapbacks and pins. Lora Innes (artist for the Wynonna Earp comics) was a big success among the fans of the show. I cannot count the number of people who bought her Waverly & Nicole Haught posters to have the actresses sign them. Personally, I was really looking forward to meeting one of my favorite artists who is quite popular in the Supergirl/Supercorp fandom: Foley. I do not know how many prints I bought from her, but what I do know is #iregretnothing. She is currently releasing one page of her LGBTQ comic The Wolf & The Widow twice a week. You should check it out. 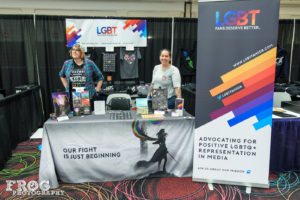 One stand was quite important at the convention: LGBT Fans Deserve Better. This association is the one that launched a fundraiser right after Lexa’s death. So far they have raised more than $150k for The Trevor Project. They continue to raise money via the sale of T-shirts, pins, art books… They also held an auction during the weekend with items signed by Alycia Debnam-Carey (Lexa), Eliza Taylor (Clarke), the Wynonna Earp cast, the Carmilla cast…

In the end, ClexaCon fully delivered on its promise to bring a community together and create discussions among us with a side-order of fangirling. I cannot wait for next year!  And if you have missed the 2017 edition, ClexaCon comes back in 2018. The dates are April 5-9 in Las Vegas again. Early Bird tickets will go on sale May 22 so get ready!