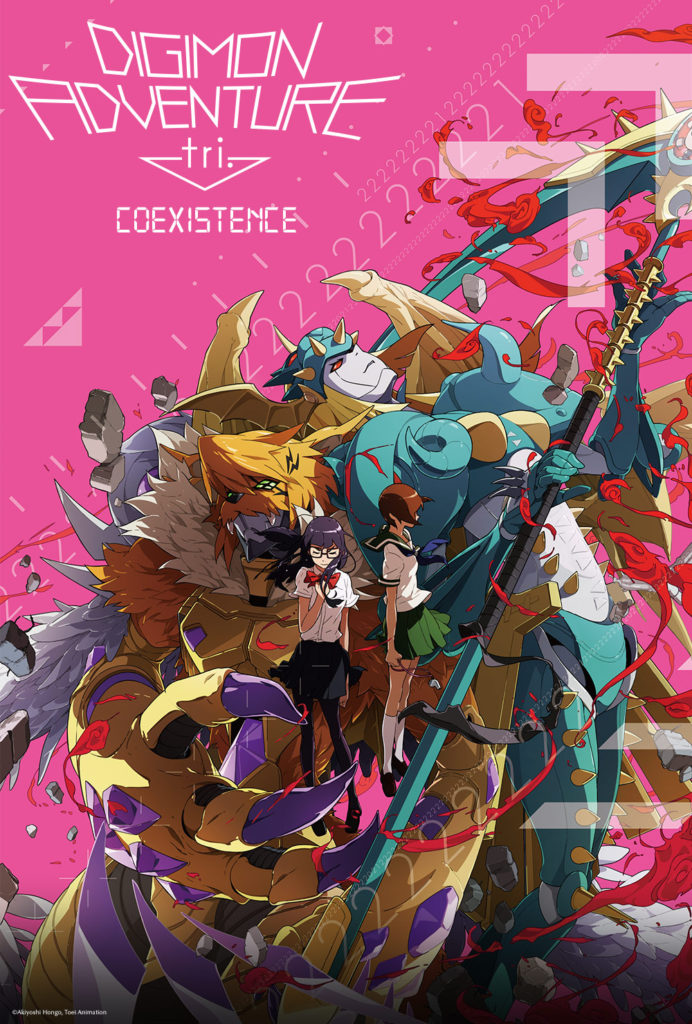 Fathom Events and Toei Animation Inc. will be releasing Digimon Adventure tri. Chapter 5 ‘Coexistence’ in select U.S. theatres on May 10, 2018.

The upcoming theatrical screening of Digimon Adventure tri. ‘Coexistence’ will include exclusive recaps from the previous features in the six-part anime series before the premiere. The audience will also get to enjoy taped interviews with the cast.

Meicoomon once again begins to rampage when she sees her partner Meiko injured by a mysterious man. Meicoomon, who disappeared into the Real World, is a distortion itself—in possession of too much power, and a key to destroying the world. The arrival of rampaging Meicoomon starts the countdown to the Real World’s collapse. A series of abnormal phenomena occur all over the place. The Digimon who appear through the distortions were waiting for this time to come. The DigiDestined are cast out of the Digital World when it goes out of order, and after returning to the Real World, are driven away by people because of their accompanying partner Digimon. Meanwhile, a cruel fate is imminent for Kari.

Mark your calendars for Thursday, May 10, 2018. The showing will be held at 7:30 p.m. local time. Tickets can be purchased online or at participating theater box offices. Nearly 500 theatres will be showing the anime film.

I’ve been enjoying the six-part Digimon Adventure tri. film series. The first chapter, titled ‘Reunion’, was released in Japan back on November 21, 2015. It was released theatrically in the U.S. on September 15, 2016. One of the best things about the current series is that it got the original voice cast to reprise their roles.

I’m looking forward to seeing how the DigiDestined will protect the entire world from the current massive threat. And while I haven’t been a fan of Meicoomon, I’ve grown to tolerate her and Meiko (the new DigiDestined).

Are you a Digimon fan? Will you be watching ‘Coexistence’ in theatres? Let us know.

Previous:Siren 1×4 Review: On The Road
Next: Azure Saga: Pathfinder – Review: Blending Sci-Fi And Fantasy In An Enjoyable RPG