“The Collection” is Fabulously Queer and Dangerous! 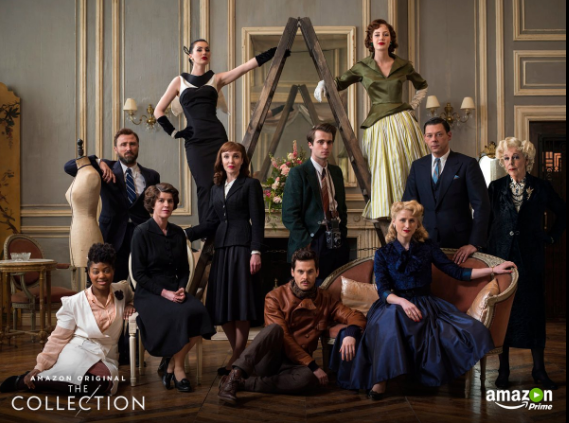 Set in the beautiful world of fashion in Paris, The Collection will transport you to the stunning yet brutal world of couture while making you care for characters with emotional baggage.

I ended up knowing about The Collection three days ago when YouTube recommended the trailer. I was bored so I watched it followed by immediately binge-watching the entire eight-episode series. The Collection is beautiful to look at, has an engaging plot, amazing production values, and characters you want to know more about. In short, this period-drama is everything!

The series is set two years after the end of the Nazi occupation. The plot revolves around the Sabine family. There’s Paul Sabine (Richard Coyle), tasked with showing the world that Paris is still the place where fashion starts and ends. However, Paul has a lot of skeletons in the closet that could end him and his business.

Tom Riley plays Paul’s younger brother Claude Sabine. Claude is the mastermind behind the beautiful designs while Paul sells them to the rich as his own. While the brothers share a lot of love for each other, tensions arise when Claude wants to be recognized for his work.

Claude also happens to be queer. In the era the show is set in, he can’t be entirely out but that doesn’t stop him from being who he is. The Collection doesn’t shy away from showing Claude’s sexuality or giving him as much screen time as the rest of the characters.

While Tom Riley’s portrayal of Da Vinci in Da Vinci’s Demons was anything but favored by most of the queer community (there was so much drama), The Collection makes up for it. Tom isn’t a stranger to playing tortured characters and he plays Claude perfectly. The youngest Sabine brother has a lot of emotional baggage and it’s enjoyable to see him standing up for himself in front of his brother.

The wonderful Frances de la Tour plays mama Yvette Sabine. You can describe her as a dangerous manipulator moving around in beautiful fur and feathered clothes. She isn’t someone to be trifled with. Try to blackmail her and she’ll have you murdered. Try to cross her and you’ll find yourself being framed for said murder. She is amazing!

The Sabines are a dysfunctional family. They have numerous secrets they can’t let anyone know about as they make their couture house a recognizable force in the world. In the very first episode, we get to know how far Yvette and Paul Sabine are capable of going to protect the family.

One of the best things about The Collection is how you want to see more of every character. A lot of times series have side characters that feel they’re taking away time from the main players. That’s not the case with The Collection. 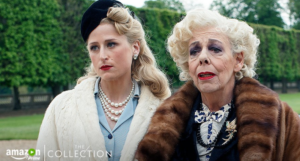 Mamie Gummer, Meryl Streep’s daughter, plays Paul’s wife Helen Sabine. I haven’t seen Mamie’s other works but she’s wonderful as Helen. She is supportive of her husband and is understanding towards Claude. She wants to see her family happy but knows that Paul might not be the man she thought he was. Every line Mamie delivers has an undertone of sadness. Helen is a woman who is trying to make things work when everything around her is falling apart. I hope we get to see more of her if and when the show returns for a second season.

Jenna Thiam plays Nina, a beautiful young woman who goes from seamstress to model for Paul Sabine. She is also a character who has a lot to deal with already let alone the pressure put on her shoulders when she becomes a model. Her relationship with Claude could have gotten on my nerves but it’s handled well enough to make it interesting.

Max Deacon plays Billy, an American photographer who discovers Nina. Billy doesn’t have a clue what he’s about to experience when he enters the world of high-fashion and it’s entertaining to see him realize what’s happening around him. I loved the scene he shared with Helen when he handed in his resignation letter. I don’t know if Max was acting in such a way and if other viewers could tell but to me, it felt that Billy was close to tearing up. He’s a character who has to ask himself what he’s willing to do to further his career and if it’s even worth it.

There are just so many well-written characters in The Collection, with respective actors making them better. There’s Alix Poisson as Charlotte, Paul’s assistant who experiences how dangerous the Sabines can be. Alexandre Brasseur plays Victor, Sabine’s driver and hitman. Irène Jacob plays Marianne, Nina’s mother who owes a lot to the Sabines. The beautiful Poppy Corby-Tuech plays Dominique, a model who has her life turned upside down.

Juliette is portrayed by Bethan Mary James, a young seamstress who has a knack for designing clothes. Even minor characters such as Sister Marguerite (Sophie Harkness) bring something to the screen when they appear. The bottom line is that the cast plays an important role in making The Collection so enjoyable.

Written by Oliver Goldstick (Pretty Little Liars and Ugly Betty) The Collection amps up the tension from the very first scene. From there the writing masterfully maneuvers the plot, brings along developed characters for the ride, and shows the stark difference between the world of couture and poverty stricken parts of Paris, making for a must-see TV show!

Have you watched Amazon Prime’s The Collection yet? What did you think? Let us know.

Previous:“Wanted” AKA “What the Spell Did I Just Read?”
Next: Dynamite to Release Red Rising “Sons of Ares” Prequel