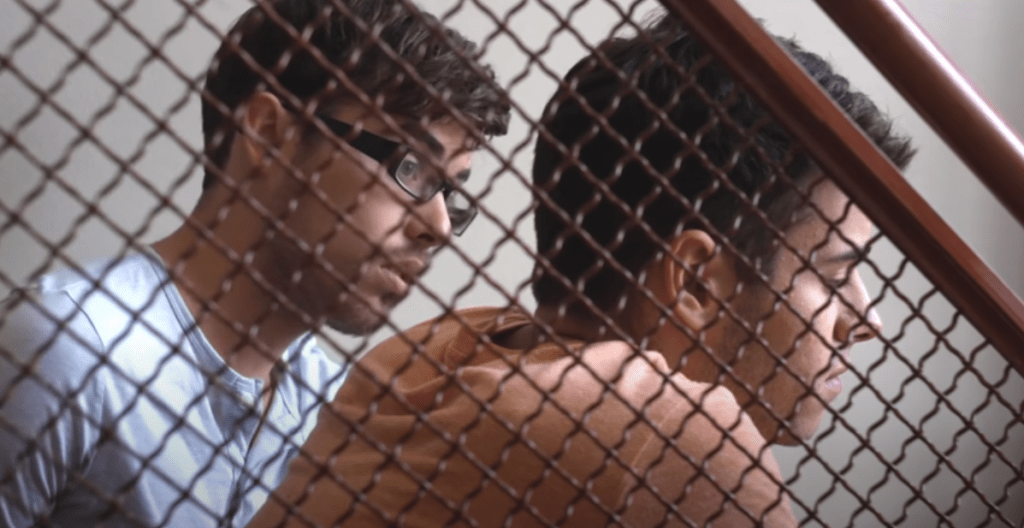 If you’re in the mood to watch a queer indie thriller this weekend, you should consider checking out Crisis Hotline (also known as Shadows in Mind). Starring Christian Gabriel, Pano Tsaklas, and Corey Jackson, this movie tells a story of how things can get way out of hand when you don’t really know the person you love.

I was provided a free screener of Crisis Hotline for review. The opinions I have shared are my own.

I appreciate queer content that falls under different genres and isn’t about characters coming out or dealing with homophobia. From writer/director Mark Schwab, Crisis Hotline features a story that isn’t about the sexualities of the out queer characters in it. This is a thriller which just happens to have an all-queer cast of characters.

This movie opened with Simon (Corey Jackson), a queer hotline call operator, getting his first serious call from a young man named Danny (Christian Gabriel). Through their conversation over the phone, we learn that Danny isn’t happy with his life. Something bad happened to Danny and said incident involved his boyfriend Kyle (played by queer YouTuber Pano Tsaklas).

Thrillers involving 9-1-1 operators aren’t new. Halle Berry starred in The Call, and one of the leads in 9-1-1: Lone Star is an operator, too. So it all comes down to the story’s ability to hold the viewer’s attention. And I have to say, Crisis Hotline held onto mine.

I liked how Danny’s life slowly unraveled for Simon. The fact this movie included flashback scenes involving what Danny went through made the narrative interesting. Crisis Hotline ‘showed’ what had happened instead of simply having Danny ‘tell’ Simon over the phone.

There’s a lot this movie’s script touched upon. I think it’s important for people to realize that while technology has made it easier for them to hook up with someone, the fact you’re welcoming a stranger into your house is still a risky move.

Also, beginning a relationship doesn’t always mean your partner is showing their real self. Danny’s love for Kyle inhibited Danny’s ability to see the warning signs in their relationship, and that ultimately led to Danny’s suffering.

Other themes included the dark web, sexual assault, blackmail, betrayal, drugs, and more. Yes, there’s a lot happening in a movie that takes place over the course of a single phone call. And I think everything was handled as well as it could be. But still, be careful while watching this movie if you aren’t comfortable with narratives involving such themes.

While I enjoyed watching Crisis Hotline, I can see someone people not liking the pacing. Danny took a handful of pauses during his phone call with Simon. And while such pauses did allow Simon to try and figure out how to properly handle the current situation, it did slow down the pacing.

Also, the dialogue can feel a bit unnatural during certain instances, but I think that’s something the twists and turns in the overall plot made up for. As far as my opinion goes, the reason behind the weirdness accompanying some of the dialogue delivery made sense by the end. The way everything came together was just amazing.

You should also be able to find it via a number of digital retailers.

Let me know if you have already watched it.