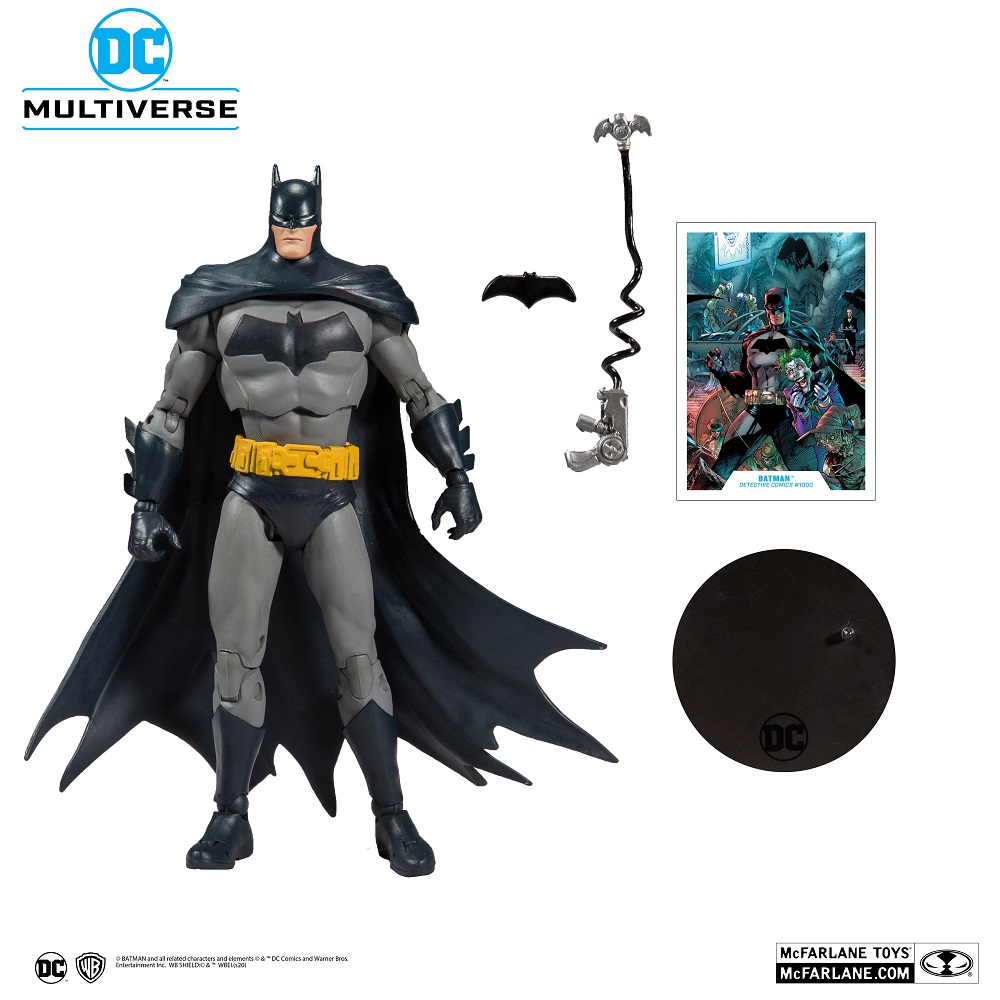 Numerous fans have been waiting to get their hands on the McFarlane Toys DC Multiverse figures for almost a year now. Well, now you can go ahead and pre-order them! All of the collectibles are expected to be released come January 17, 2020.

The new DC Comics-inspired McFarlane Toys will be available in mass as well as specialty retail stores. The latest DC Multiverse collector line has 7-inch figures featuring 22 points of articulation. Take note; each figure is accompanied by a collectible card. The card has character-specific art and biography. Of course, the figures also come with their display bases and accessories.

As a child, Bruce Wayne watched as his parents were brutally killed in Gotham City’s Crime Alley. Traumatized by their deaths, he devoted his life to becoming the world’s greatest weapon against crime—the Batman! To become the ultimate vigilante, the Dark Knight disciplined his mind and body to reach the pinnacle of mental and physical superiority. He’s a master detective and an expert martial artist, but his greatest weapon is his mind. Batman has a plan for every occasion, as well as high-tech weapons, gadgets, and vehicles to assist him in his relentless pursuit of justice! 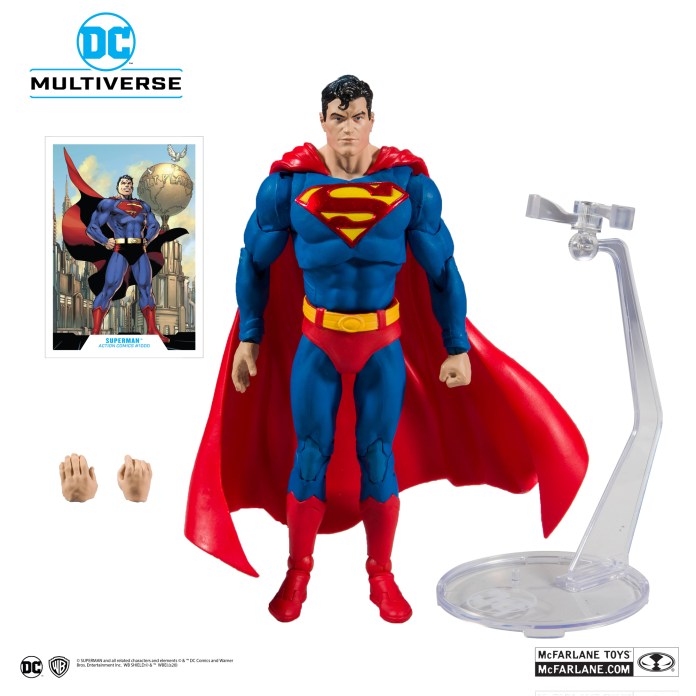 Sent to Earth from the dying planet of Krypton as a baby, Kal-El was found by farmers Martha and Jonathan Kent and raised as their son, Clark. As Clark grew up, the radiation from Earth’s yellow sun gave him extraordinary powers, which he kept hidden. Now fully grown, he uses his powers to protect his adopted world as Superman. The Man of Steel is virtually invulnerable and has the powers of super-strength, super-speed, and flight. He also has enhanced senses, including heat vision, X-ray vision, super-hearing, and super-breath. 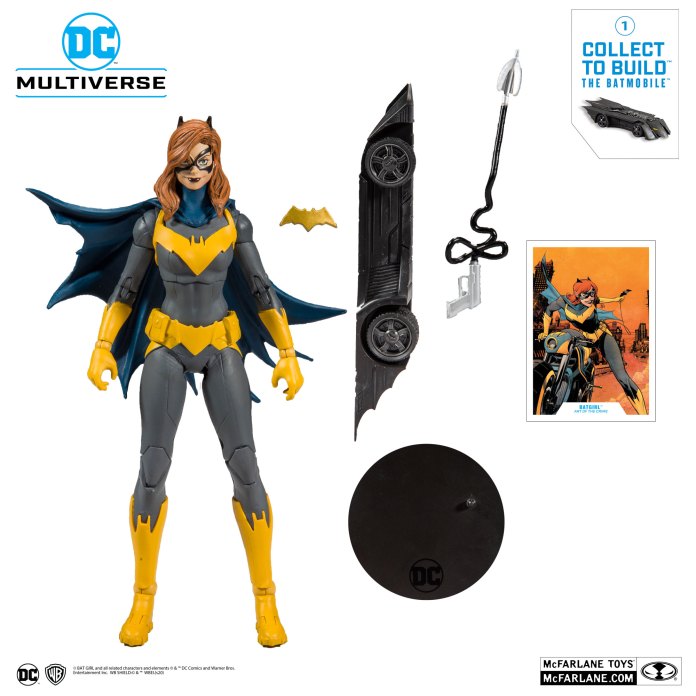 Batgirl: Art of the Crime- Part of a 3-figure collector set

By day, Barbara Gordon is the bookish daughter of the Gotham City Police Commissioner, Jim Gordon. By night, Barbara dons a cape and cowl as Batgirl, committed to justice like her father. While her Utility Belt is equipped with Batarangs and other crime-fighting gadgets, her greatest tools are her brilliant mind and her unwavering determination. Batgirl is an expert martial artist and gymnast, trained in part by Batman, who’s extremely athletic and agile. Her eidetic memory, heightened intelligence, and advanced knowledge of computers makes her a natural leader and skilled crime fighter. 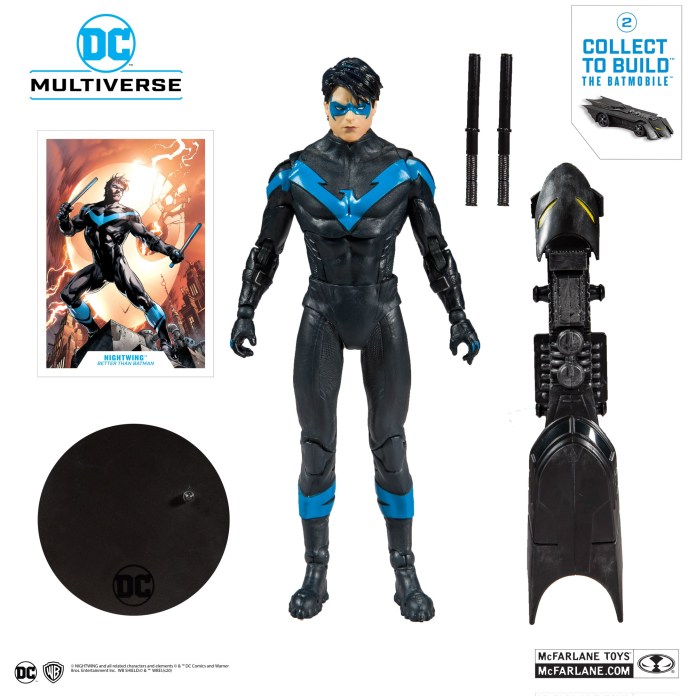 Nightwing: Better Than Batman – Part of a 3-figure collector set

Dick Grayson began his crime-fighting career as the original Robin—Batman’s protégé and crime-fighting partner. An expert acrobat and skilled fighter, Dick eventually left the nest and ventured out on his own as a new hero called Nightwing. His childhood experiences as a circus acrobat and trapeze artist make him extremely agile. He is a superior fighter and a highly skilled martial artist who has been personally trained by Batman. Nightwing is a keen detective, a natural leader, and a strategist with advanced knowledge of a variety of technologies. 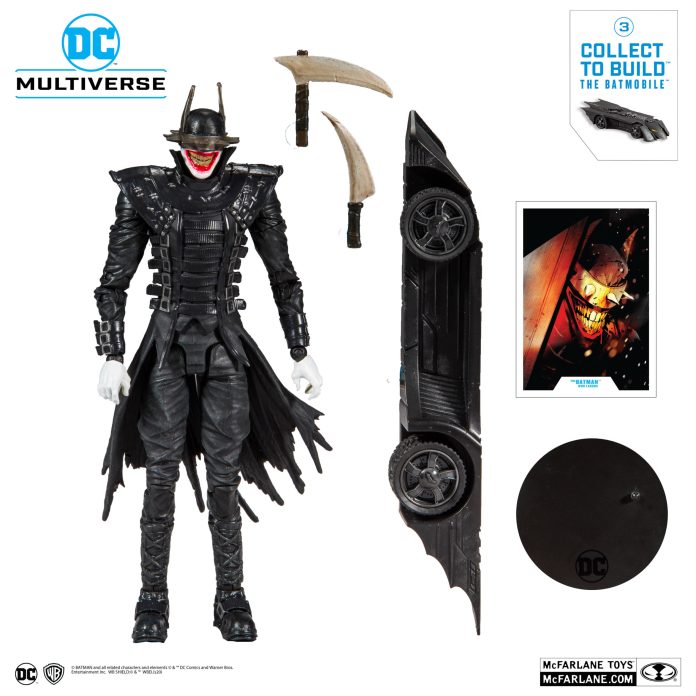 The Batman Who Laughs – Part of a 3-figure collector set

Born from the nightmares of the Dark Multiverse, the Batman Who Laughs is a hybrid version of the Batman and The Joker from Earth-22. This twisted version of Batman was created when nanotoxins from The Joker’s heart were released into Bruce Wayne’s bloodstream, causing the Dark Knight’s perfect mind to merge with the warped psyche of the Clown Prince of Crime. He soon became part of an attempt to plunge the entire Multiverse into ultraviolence, chaos, and utter darkness. After being initially defeated, the Batman Who Laughs managed to survive and remains a threat to the greatest heroes of the Multiverse. 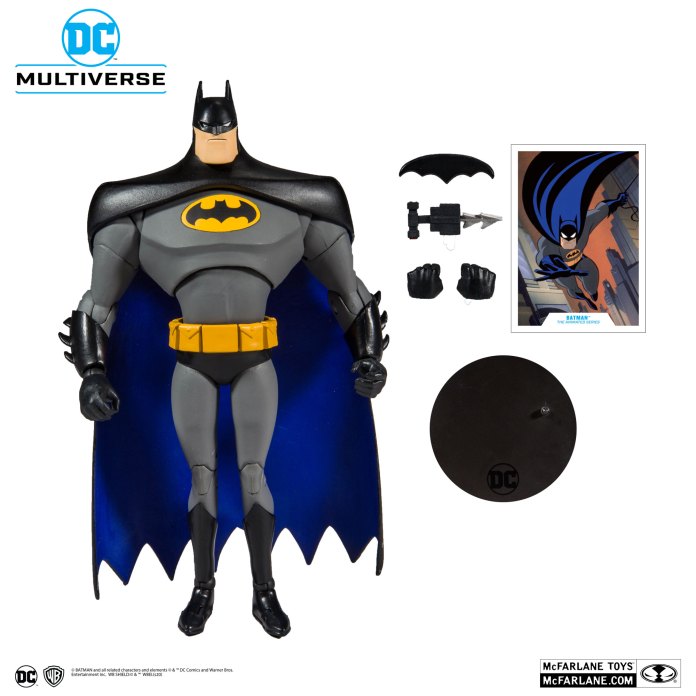 When two shots rang out, Bruce Wayne’s life changed forever. He pledged himself to justice and he has upheld that oath for years. Wearing many names—the Dark Knight, the World’s Greatest Detective, the Caped Crusader—he has battled tragic foes like The Joker, The Penguin, Mr. Freeze, and so many more. But deep inside, he knows that he shares something with them that most of humanity wouldn’t understand—a commitment to the fight. 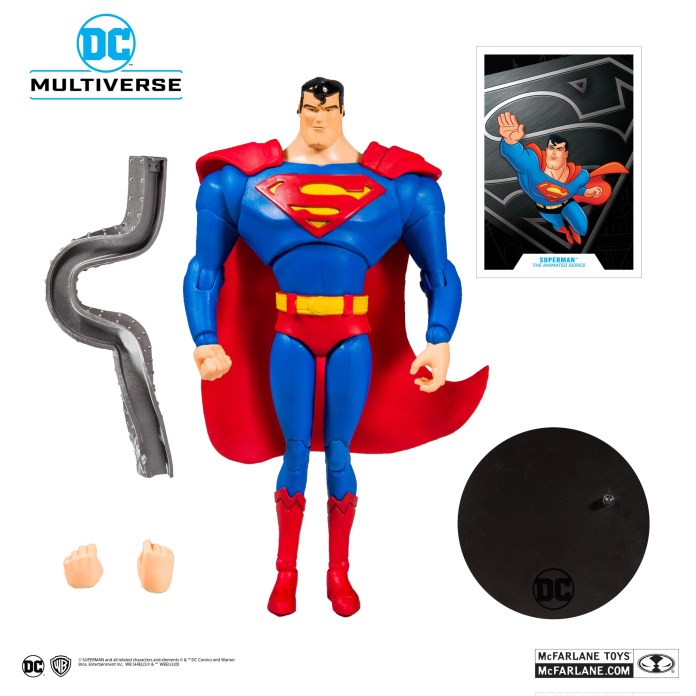 As the planet Krypton was destroyed, scientist Jor-El secured his infant son, Kal-El, in a rocket that would transport the child to Earth. There, as Clark Kent, he discovered the truth about his interplanetary heritage and, upon reaching adulthood, assumed the identity of Superman, the Man of Steel. In the city of Metropolis, he battles the forces of villainy and continues his quest for “truth, justice, and the American way.” 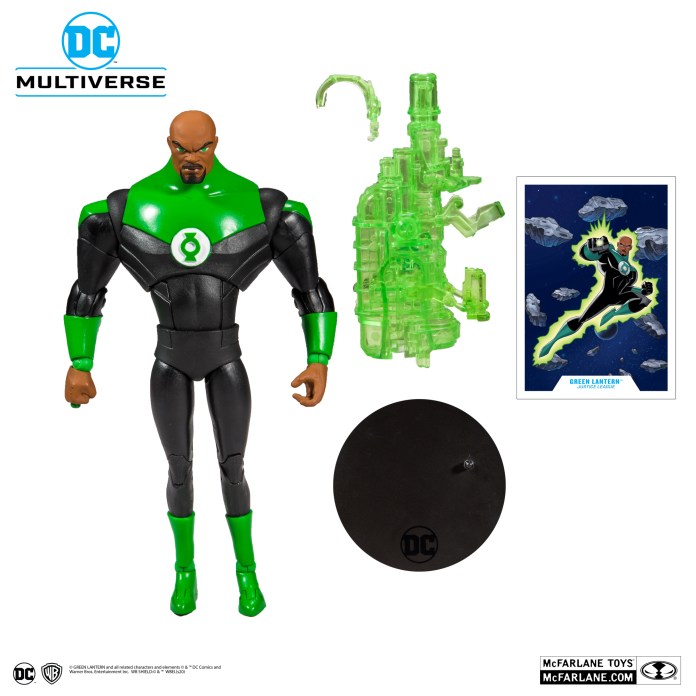 Recognized by the Guardians of Oa for having extraordinary courage and heroism, John Stewart was awarded a power ring and trained to be a member of the Green Lantern Corps. After years of patrolling the deepest regions of space, John returned home to protect Earth as a member of the Justice League. Armed with perhaps the mightiest weapon in the known universe, Green Lantern uses his power ring’s emerald energy to accomplish the impossible. 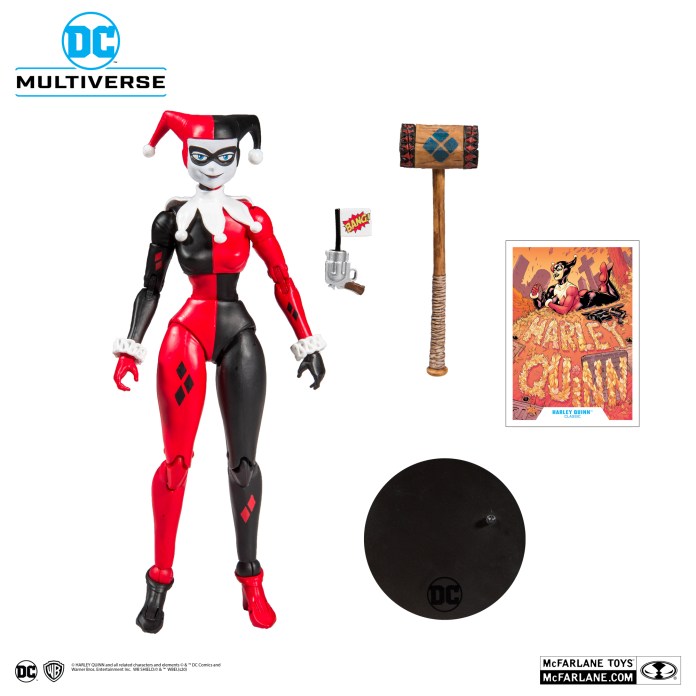 When she first met The Joker, Dr. HarleenQuinzel was his psychiatrist at Arkham Asylum. Instead of treating her patient, she fell in love with him and became his prankster partner in crime known as Harley Quinn. Although mentally unhinged, Harley is highly intelligent. She’s a skilled gymnast and her agility makes her an adept fighter. Like The Joker, she uses a variety of weaponized gag props in her chaos-creating crimes! 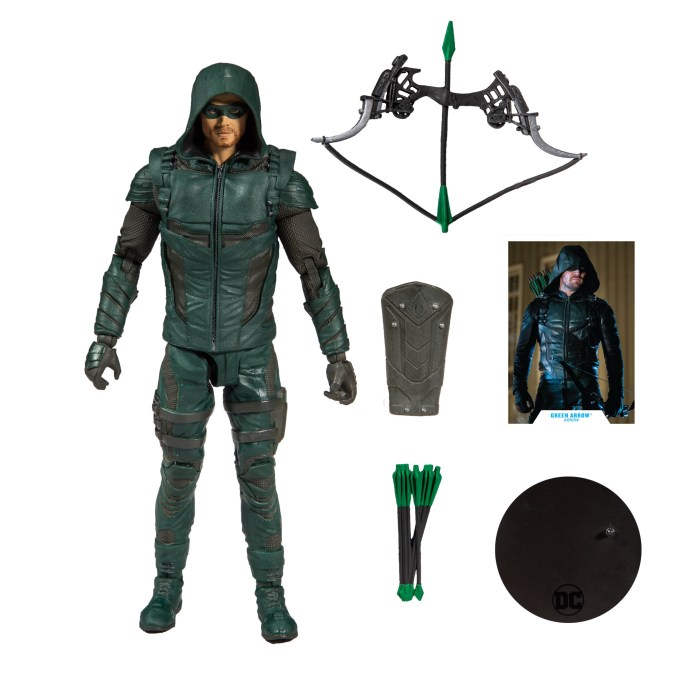 Following Oliver Queen’s shocking decision to turn himself over to the FBI and reveal his identity as the Green Arrow to the public, Oliver has spent the past five months in prison while his team was left behind to protect Star City. He is determined to keep a low profile to shorten his sentence for the sake of his family. But Oliver’s limits will be tested when he and team Green Arrow are pitted against the most ruthless villains they have yet to face. 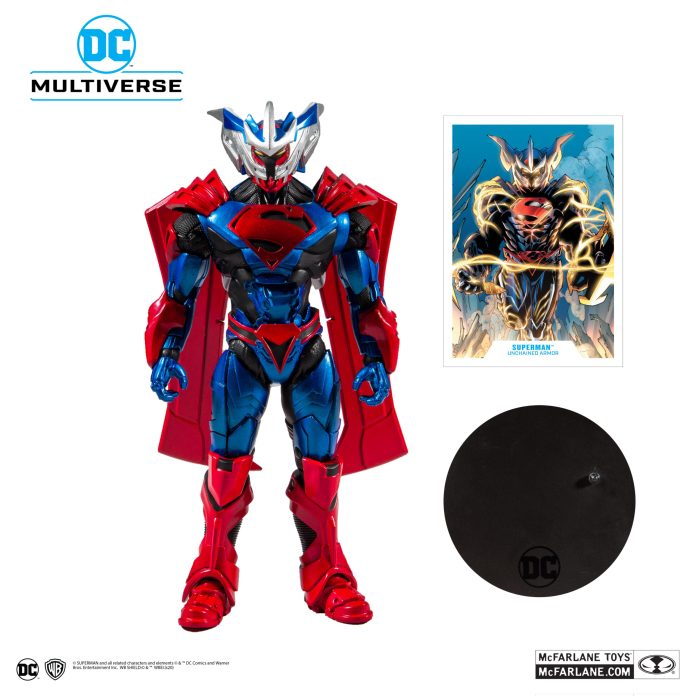 When the weaponized alien called Wraith goes on a destructive rampage in the Batcave and both Batman and Wonder Woman are unable to stop him, Superman dons an armor that features a shield and battle axe to confront the electromagnetic adversary. Their battle continues to the center of the Earth where Superman is finally able to defeat him, leaving him floating in the lava at the Earth’s core. 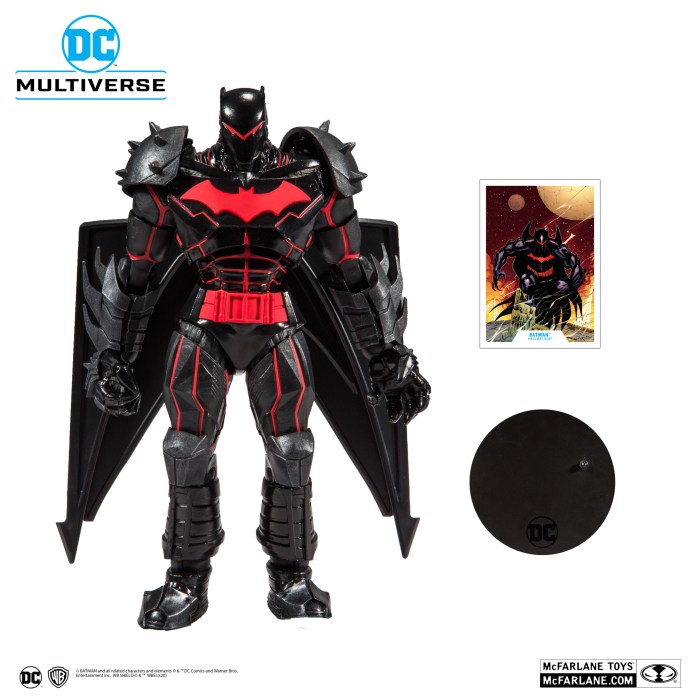 After losing his son Damian—a.k.a. Robin—Batman eventually found temporary peace, until Damian’s body was stolen and taken to the fiery planet of Apokolips. Determined to bring Damian back to life, Batman dons the experimental Hellbat suit (forged by the other members of the Justice League) and ventures to the hellscape of Apokolips to take on the virtually indestructible ruler Darkseid! 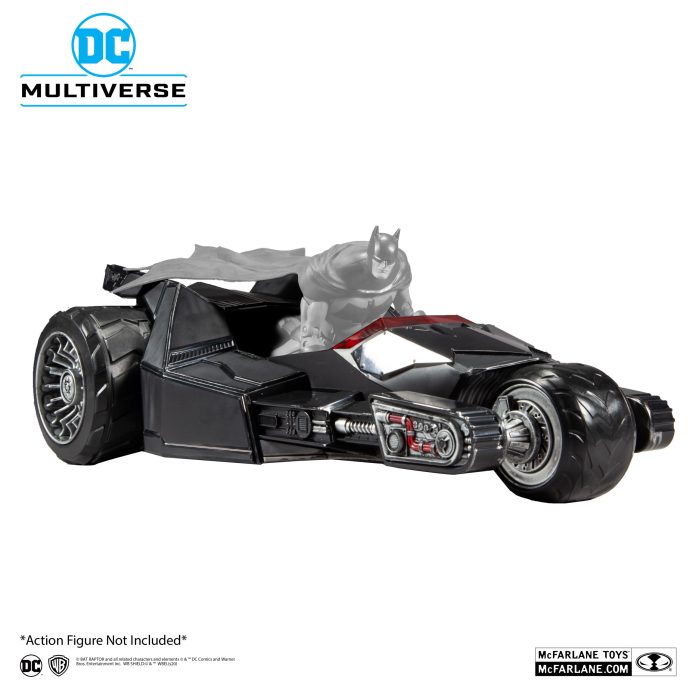 The Bat-Raptor is a state-of-the-art, three-wheeled, open-air roadster built by the Dark Knight himself. Powered by a mighty engine, this trike is able to make massive leaps, scale brutal terrain, and chase down the most evasive criminals. It also features a built-in grappling system and an emergency ejection seat.

As of writing this, you can pre-order from Entertainment Earth, Amazon, Megalopolis: City of Collectibles, and Walmart.

Which ones do you plan to get? Let us know.

Previous:Amazon Studio’s Nazi Hunting “Hunters” Will Premiere This February
Next: Netflix’s ‘Dracula’ Is A Surprisingly Modern and Fun Ride