JK Rowling recently talked about LBGT wizards in Hogwarts. I was happy but don’t you think it would’ve been better to show it in the books/film? isn’t she just courting the queer fandom? Millions of fans don’t read interviews to keep up with such stuff. For them, if it didn’t happen in the books, it didn’t happen at all. – Anonymous

Hello there my dear anonymous friend, thank you for an excellent question. Unfortunately there isn’t really a straight yes or no answer. Well there is… but it doesn’t really allow for the many nuances involved.

Okay, for those of you that don’t know – JK Rowling just can’t leave Harry Potter alone  and she has taken to Twitter like a fish to water, two things that are never good for fans. In an impromptu Twitter Q&A, Rowling announced that there was at least one Jewish wizard at Hogwarts: Anthony Goldstein, Ravenclaw. And insisted that OF COURSE there were LGBT students at Hogwarts. While no one is upset that JK is finally confirming something HP fans have hoped for a LONG TIME, this discussion also served as a reminder of how little actual diversity was featured in the books themselves. (via The Daily Dot)

OBVIOUSLY it would have been better to SHOW more diversity in the books/films. Because yeah, if it’s not explicit then it’s easy for people to ignore or even deny the possibility of LGBTQ+ people in the magical community. There are still people that deny Dumbledore, and he’s probably one of the most well known queer characters around.

But I don’t think that JK is trying to deliberately trying to court or bait a queer audience because let’s face it, JK Rowling doesn’t need to court anyone. It’s not like she’s struggling to find a readership. 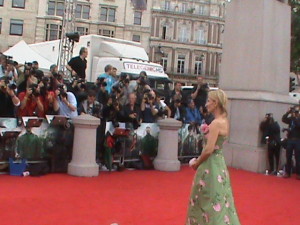 Also, considering Harry Potter and The Philosopher’s Stone (I’m Australian. I refuse to call it the other name) was published in 1997 by a complete unknown, I think JK definitely tried to inject some diversity into her story. It did feature characters of Asian, Southeast Asian, and African decent – although she has been accused of tokenism. And if you look at her work since the HP series, she’s definitely trying A LOT harder to include more diversity in her books. The Casual Vacancy included explicitly queer characters, as did The Cuckoo’s Calling.

Was it enough? Nope. No way. Absolutely not. But I like to give credit where credit’s due and she tried, as much as a straight white woman that’s still largely ignorant of the struggles of minorities can while trying to work in a professional world that tries to delete diversity at every turn.

Here’s the deal. There is absolutely NO EXCUSE for the fact that the ONLY LGBTQ+ character in the Harry Potter Series was outed after the final book was released – especially considering the fact that Dumbledore’s relationship to Grindelwald was such a significant part of the story. To make matters worse the character was already dead when he was confirmed as queer. TOTALLY NOT COOL JK! So I would not blame anyone for being angry.

That said, this is not a Harry Potter issue. Harry Potter is a symptom and all discussions about representation are important but it isn’t the battle that needs to be fought. The final book in the series was published in 2007. That’s over 5 years ago and although it physically pains me to admit it, that story is over. Rather than arguing over JK Rowling’s mistakes, we need to learn from them. We need to prevent them from happening again.

Looking at JK Rowling’s work since Harry Potter, and the very fact that she is engaging in this conversation and attempting to rectify her wrongs (even if it’s too little too late) suggests that she is listening. But there are so many other people that are not! There are so many stories that are still being told that fall into the same traps as JK or worse. Those are the battles that need to be fought.

Finally, my lovely wonderful anonymous contributor – don’t feel bad for being happy about what JK Rowling said. While there are a lot of problems with this kind of reckoning inclusion of diversity via the word of god – it’s still a good thing.

P.S. If you want to petition JK for something. Petition her to include more prominent diversity in the upcoming Fantastic Beasts and Where to Find Them film. And don’t forget to yell at Warner Bros as well. Make some noise, let them know what you want.

Previous:Top LGBTQ+ Geek Moments of 2014
Next: Laurel Lance: The Material of a Hero