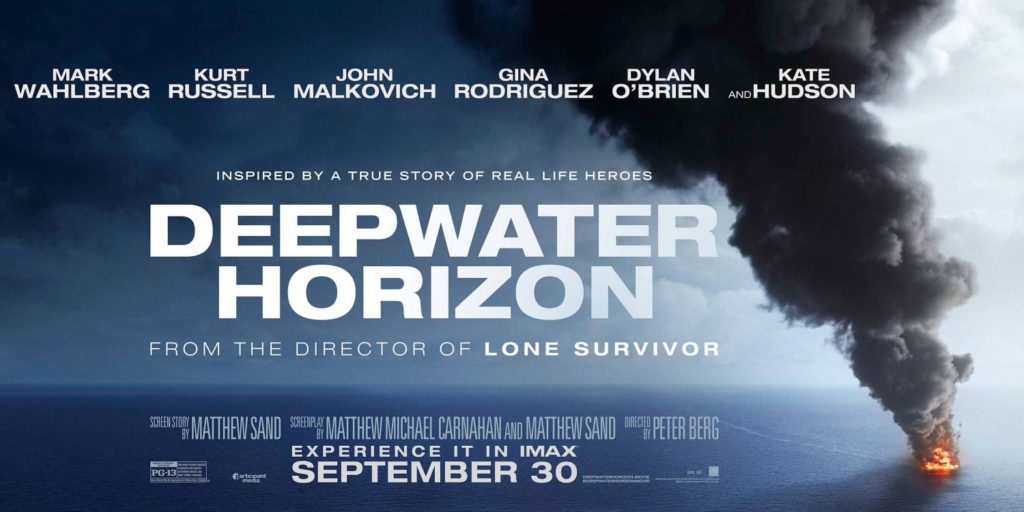 Deepwater Horizon chronicles the true story of the fire aboard the oil rig that caused the worst oil spill in the history of the United States. It is a gut-wrenching, intense, heart-stopping journey through an horrific event that will leave you breathless and in tears.

I make no qualms about being one of those shallow people who only watch certain movies because of actors that they like, but Deepwater Horizon is one of those movies that I would happily (perhaps a poor choice of words) go see even if it weren’t starring Dylan O’Brien.

This movie is fantastic. I say that a lot but this time I think I may actually be right. The cinematography is amazing – beautiful shots of the Louisiana bayou, faraway shots of an oil rig engulfed in flames – and the music is haunting. The score is simple, but it does an excellent job of evoking the mood and establishing the setting.

When I said this movie was intense, I don’t say that lightly. I was holding my breath from the moment Mark Wahlberg and Gina Rodriguez set foot on the rig, because I knew what was coming, I just didn’t know when. Once the blowout occurred, I was on the edge of my seat. I’m fairly squeamish and several times I had to look away or pull my shirt over my eyes. I know people died but I didn’t know who, and my heart was in my throat with each second as more and more catastrophe befell the rig and its crew. 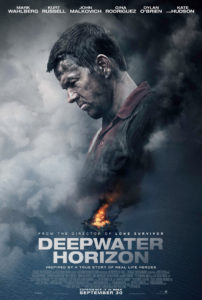 It is vitally important to remember, as you’re gasping at explosions and watching a torrent of mud throw Dylan O’Brien against a wall, that this happened. Real people experienced this; lives were actually lost. Some of the survivors were on-set to ensure that the portrayal was as accurate as possible, and actual footage of the ensuing court proceedings opens and closes the film. One criticism is that, in trying to honor the actions and sacrifices of so many, it was difficult to get to know the crew as individuals; the main focus is on Wahlberg and Rodriguez. However, the movie ends with a touching tribute to those who lost their lives.

This film will also make you angry. If you don’t know much about what happened on board the Deepwater Horizon, you’re going to learn thanks to this movie, and you’re probably not going to like what you see. (My friend whispered, “I hope he dies,” about John Malkovich’s BP executive, which is a horrible thing to say about a real person but not entirely inaccurate.) I think it’s important for people to know and to understand, and perhaps it may change perspectives on certain things.

I can see Deepwater Horizon getting award recognition. I really enjoyed the score, and it’s such a well-shot film. Rodriguez was particularly captivating as Andrea, and it wouldn’t be totally out of left field to see some acting nominations for her. I would love to see some for Dylan as well, but with so many big names in the film, he may get overlooked; in particular, I thought his accent was very well done.

Deepwater Horizon is a film that I highly recommend everyone see, if possible. It may not be for the faint of heart, but I think the crew deserves to be remembered. I definitely plan on seeing it again.

Deepwater Horizon opens nationwide in the US on Friday, September 30th.