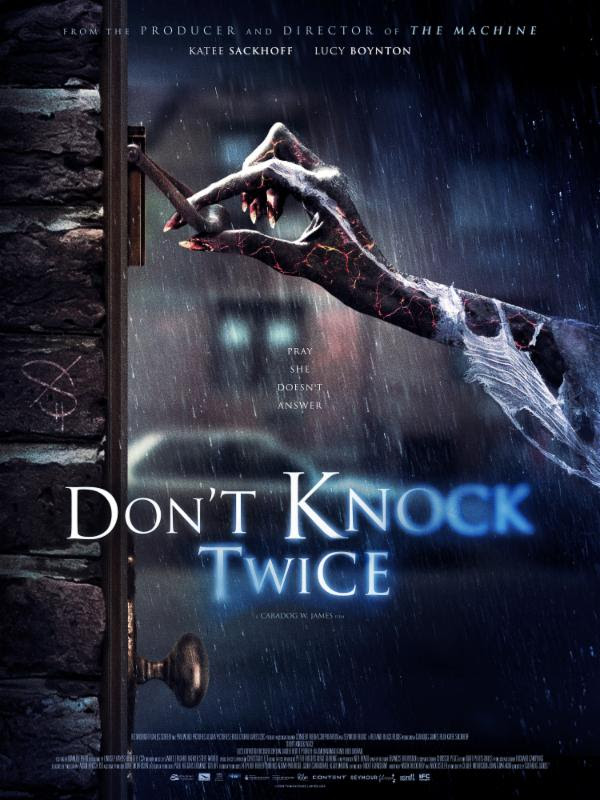 Don’t Knock Twice is an enjoyable paranormal horror film that centers on reestablishing the bond between a troubled mother and an estranged daughter.

This review contains minor spoilers for Don’t Knock Twice. You have been warned!

I’ve been looking forward to this film ever since I mentioned the trailer. After watching the screener I wasn’t disappointed.

Katee Sackhoff is a recognizable name in the sci-fi world. She knows how to play a badass female character. That’s why I enjoyed seeing her doing something different in this film. She is still not a woman you would want to mess with but the setting feels more down-to-earth with a good dose of paranormal thrown in. Jess (Katee) will do anything to protect her daughter (Lucy Boynton) and you will definitely root for her. Jess is given layers as we are told her backstory and how she had to give Chloe up because of her drug addiction.

Things start out slow in the beginning, with both main female leads trying to reconnect. However, the pace quickens once the plot points are set in motion. After a few minutes, you’ll follow Jess and Chloe trying to figure out how to fight against an ancient evil.

By no means is the plot for Don’t Knock Twice original. However, that doesn’t mean that director Caradog James doesn’t make it enjoyable. The film makes use of lighting and mirror effects, old crazy women, the camera being used to show the perspective of paranormal beings, etc. Everything does feel familiar but still raises tension in a manner that’ll make you watch the whole film. Most of the horror is built through creating a sense of dread and anticipation which works really well.

Another impressive aspect about Don’t Knock Twice is its use of minimalistic creature design. You don’t always have to show an entire demon to give rise to horror. Sometimes using shadows and a few glimpses are enough.

The thing that I enjoyed was the main mystery. There are a lot of twists and turns in this film that will keep you guessing. The last few minutes might disappoint some viewers. But it important to realize that there is no happy ending in this one. Don’t Knock Twice has been created for the scares which will continue till the very last scene.

Furthermore, there’s a Don’t Knock Twice game coming out on 11th April 2017. The demo is currently available on Steam. So, go ahead and check that out for an immersive horror experience.

Are you looking forward to watching Don’t Knock Twice? Let us know!