We Catch up with San Jose’s Councilman Rogers – Uh, We Mean Diep 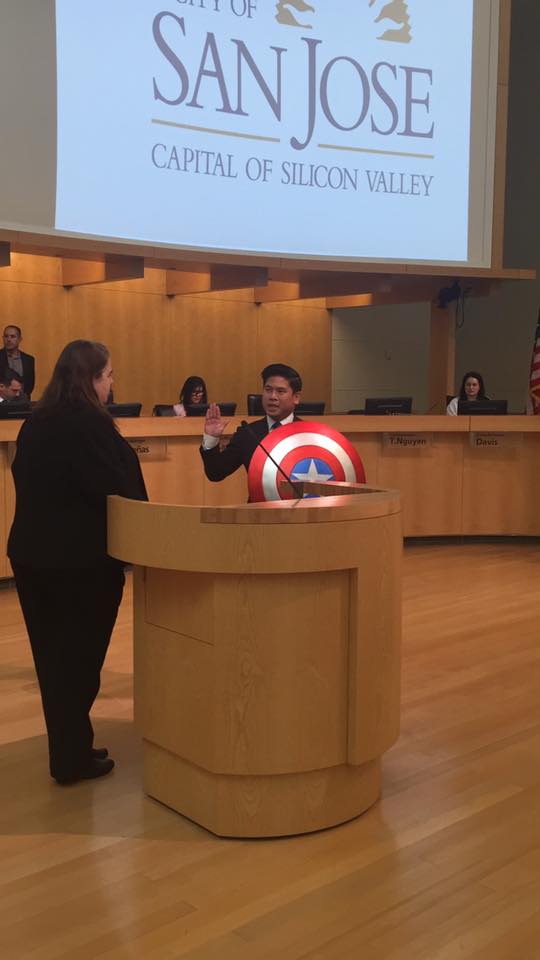 We caught up with Lan Diep (AKA Councilman America as I’m now calling him) after his Captain America tribute went viral. He gave us a few words about how people were reacting, what Cap means to him, and what’s happening with that shield.

In case you haven’t seen the viral pictures everywhere from CNN to HuffPo, let me recap this for you. Councilman Lan Diep of San Jose’s District 4 took his oath of office holding a limited run replica Captain America shield. (NBC actually has a video of the swearing in ceremony itself if you want to brighten your day.) That’s right, this is a real thing that happened.

Diep is what the future of the Republican party should look like: smart (like double majors in Political Science and History smart), socially conscious, environmentally aware, and willing to take himself a little less seriously if it gets people engaged in their government. He was one of former President Obama’s Champions for Change and also posted in support of the Women’s March in Jan Jose. He’s legit cool, people.

He’s so cool, in fact, that he took time out of his packed schedule to answer a few questions for us.

The Geekiary: What have the reactions been to your swearing in since the story went viral? Have they been mostly positive or negative?

Councilman Diep: The reactions to my oath of office have covered the entire spectrum. I can’t believe the amount of people who have posted, contacted me through Facebook or Twitter to share their opinion. There have been plenty of people who expressed anger or mocked me. But the overwhelming response has been positive. Lots of people have told me how much they enjoyed watching it and wished that more people in public office took a lighthearted approach to politics.

There’s been good and bad, but I have this sense that overall, people have reacted positively and found hope in what I did.

TG: Has Captain America inspired you as a politician? What qualities does he have that you’d like to see in government?

CD: I think Cap and Superman are the two comic book characters to set your moral compass to. In the context of politics, Captain America’s shield fit perfectly because it represents the American flag. As a character, Captain America — when not affected by a cosmic cube — represents the American ideals of liberty, fair play, and equal justice. He is a man displaced in time, faced with survivor’s guilt, who is trying to do the right thing. He doesn’t serve any party or president… He serves the ideal of America. And in many instances, those ideals and the politics of present day are in conflict. He isn’t perfect, but he tries to stay true to himself.

TG: Which is your favorite Captain America movie?

CD: The best Captain America movie to me is still Captain America: The First Avenger. That movie still ranks very highly to me of the many movies in the Marvel cinematic universe. It was humorous, exciting, and romantic. Watching it, you really got a sense of Captain America’s sense of right and wrong, and how that is challenged in the modern world. I think America is still struggling to reconcile our idealized version of ourselves with the realities of life in a post-9/11 world. So it’s an interesting thing to watch, at least for me.

TG: Will you be hanging the shield in your office?

CD: (laughs) I am debating it. I am definitely keeping it in my office, but am unsure whether I want to hang it up. It would make a great talking piece on the wall for sure but quite frankly, it’s not very accessible there. Every second counts in a pinch and sometimes you I’ll just need to grab it and heed the call, ya know?

Thanks to Councilman Diep for sharing his geekiness with us! San Jose, my Cap-loving heart is intensely jealous of you. Go to a City Council meeting for us and tag @TheGeekiary on Twitter so I can live vicariously through you.