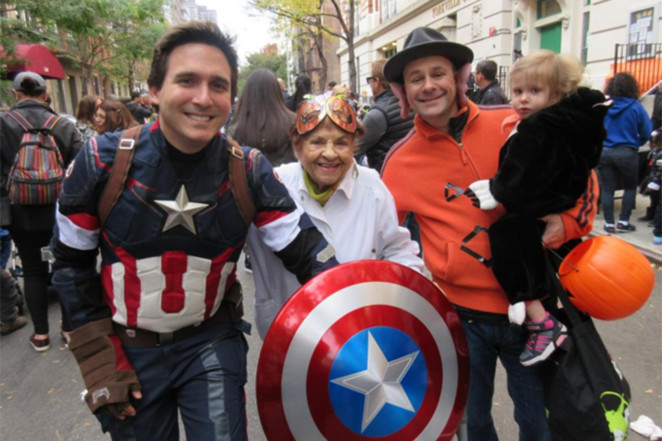 Photo Used By Kallos In Email To Donors

Ben Kallos is a Democrat, a Council member for the 5th District of New York City currently running for Borough Presidency (Manhattan), and a huge, huge nerd.  The latter aspect of his life is evident when he attends Anime NYC, hosts Marvel viewing parties, or cosplays as Captain America.

Unfortunately, Marvel isn’t too fond of his cosplay antics when he does them while engaging in political activity.  They have requested that he ceases this activity immediately.

I write to request that your campaign refrain from using Marvel’s characters in its advertisements for your quest for the Borough Presidency or otherwise. While Marvel appreciates your obvious affection for our properties and welcome your support as a fan, we ask that our characters not be used for political purposes or to support political campaigns.

Kallos tweeted the letter out, calling it ‘charming.’  He seems to be taking the situation in stride, but hasn’t committed either way on whether he’ll comply with the request.  “If folks really want to know how the rest of the story turns out, they should subscribe and tune in to the next issue,” Kallos teased in a Fox News report.

Kallos isn’t the first nerdy politician to adopt Captain America iconography as part of his campaign or to use the imagery in their political life.  In 2017, San Jose City Councilman Lan Diep took his oath with his shield.  Diep, a Republican, had this to say about why he chose to use the super heroes iconography in his politics: 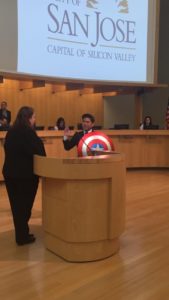 I think Cap and Superman are the two comic book characters to set your moral compass to. In the context of politics, Captain America’s shield fit perfectly because it represents the American flag. As a character, Captain America — when not affected by a cosmic cube — represents the American ideals of liberty, fair play, and equal justice. He is a man displaced in time, faced with survivor’s guilt, who is trying to do the right thing. He doesn’t serve any party or president… He serves the ideal of America. And in many instances, those ideals and the politics of present day are in conflict. He isn’t perfect, but he tries to stay true to himself.

This strong moral character crosses political lines and has been used to express a positive hope American ideals founded for liberty, justice, and truth.  He’s not Republican or Democrat.  He highlights parts of the American political machine that can often get lost in partisan politics and divisive rhetoric.

Both sides of the political aisle see something in the character that they can relate to and feel reflects basic core American values that are worth fighting for.  This is how it has always been and, hopefully, always will be.

Former Marvel Editor Tom Brennan pushed back against the idea of Captain America being political op/ed in the New York Daily News earlier this year.  He, too, sees the hero as a figure that appeals to the idealism on both sides of the aisle:

For every conservative who argued that Cap embodied American self reliance there was a progressive who’d gamely counter that a man who puts on the flag to defend the least of us belongs to the left. You’d hope they would realize that if they both see their values reflected in a hero, then maybe the real lesson is there are noble qualities in most political ideologies.

Kallos tweeted a link to the article, highlighting a part he noted as being particularly relevant in the wake of the current request from Marvel.

Former @Marvel editor @Brennanator wrote earlier this year in @NYDailyNews: “If you make Marvel Comics apolitical, then they stop being Marvel Comics. They have always been political…Comics should reflect politics — and not just one side!” https://t.co/TnL4fyTJ4S

To put it simply, Captain America is a political symbol whether they like it or not.  Marvel can try to distance themselves from that fact, but his costume is literally an American flag motif from head to toe.  Some of his earliest stories featured him fighting against Nazis and pushing back on authoritarianism.  Even his current run in the MCU leans into politics.  One of his most iconic lines from from Winter Soldier is, “This isn’t freedom. This is fear,” which is clear commentary on authoritarian leadership and oppression.

These messages are broad, but they are basic tenets that most people can agree are worth fighting for.  He stands for freedom and liberty.  Even I – a person who can often be highly critical of the current state of American politics and recoil at overt displays of patriotism – can agree that this is a positive message.

There’s always the chance his imagery can be abused, of course.  If the image of Captain America is co-opted for nefarious messages or a partisan stance on a particular issue, it’d reflect poorly on the hero and the company.  Marvel would have to step in at that point and could be accused of double standards.  Why did they ask this candidate to stop but not that one?

Even though Kallos, like Diep before him, isn’t using it to push anything controversial or negative, Marvel wants to put a stop to it.  It’s important to note that Diep was never told to stop using the imagery (as far as we know), so either he somehow slipped under their radar, or they hadn’t made a decision on how to handle this type of use of the character back in 2017.  Perhaps now they think that banning it outright is better than having to make tough decisions on a case-by-case basis.

From a business standpoint, it makes sense, but I don’t know if Cap would agree with their choice.  It doesn’t feel like freedom.  It feels like fear.