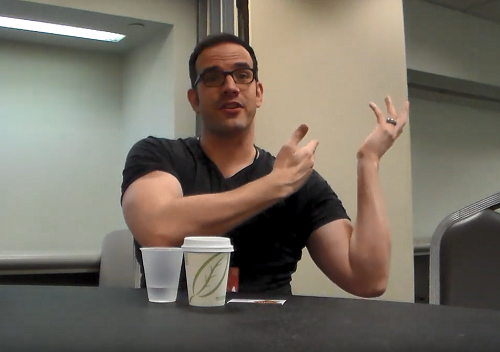 At Anime NYC this past weekend, I had the opportunity to speak with J Michael Tatum, an American voice actor (as well as director and script writer) for a myriad of anime roles – such as Iida from My Hero Academia – as well as voicing the openly gay Borderlands character Sir Hammerlock.

One of the things J Michael Tatum talked about were the various changes in the voice acting industry since he started over a decade ago. He talked about how easy it was, at the time, to become a voice actor. “I kind of fell into it by accident, because it was a small, relatively niche industry when I started, that I was kind of ‘discovered’. Because I wasn’t even trying to be a voice actor at that time. I had a whole other career. […] In the past 15 years, it has gotten huge, so that now it’s more like – I would guess – a traditional film or television industry where there are huge waiting lists to audition and get in. […] It’s really hard to get in the door.”

However, he’s sort of glad that it has become this way, because now that the industry is growing in popularity, things like simuldubs have changed his career in other ways. “Simuldubs, especially with shows like My Hero Academia, have really kind of made voice actors for dubbing cool in a way that they hadn’t been before. […] Dub actors were kind of seen as interlopers. […] Back in the day, we were an audio option on a Blu-ray, and now we’re usually the first impression someone has of the show.”

“Look at cons now,” he said. “Look at how huge cons are getting. It used to be you’d go, and there were a couple thousand people over a couple of days, and now it’s a huge business.”

He talked about how he does get recognized – not just at conventions, which he expected, because anime fans are a very devoted bunch – but he also gets recognized when he goes out in public, which he is still getting used to.

Tatum also happily discussed his experience recording Borderlands, which he said is one of his favorite jobs, because he would leave the studio really feeling like an actor, which isn’t always the case. Mostly, though, as an openly gay man, he was thrilled with the sensitivity and inclusivity of the writers and the game franchise itself. “Hammerlock, who is a gay character in a relationship with another man, and they’re very- throughout the whole process of recording 3- I mean, his sexuality was alluded to in 2 and the DLC, but it’s very much out there for all the world to see in 3, which I think is very bold and long overdue. But they were very inclusive. They were like, ‘Let’s talk about this. Is that a line you feel comfortable saying? Do you think that’s a fair representation?’ I wasn’t having to play some writer’s idea of what a gay man sounds like, I was getting a say in it.”

He hopes that this is something that will eventually spread to other mediums, remarking on all of the changes in representation that have happened since he was a kid, growing up during a time when it was not advisable to be out. “Now there’s a niche. And now it’s like, I feel like these creators get into the business and they’re like, ‘No, we want to represent those people.’ I think there’s a time in any kind of representation when it evolves. I think you have creatives who want to represent this type of person but they’re not quite sure how to do it, so they shy away because they don’t want to do a disservice. But then as they start talking and getting out there and stuff, it becomes more like, ‘Hey, how do you want to be represented? How do you see yourself?’ And they take more and more risks.”

You can check out our full interview with J Michael Tatum below: