An MCU Account May Have Tweeted an Endgame Spoiler

I hate being vague in the title, guys, but I’m treating a potential Avengers Endgame spoiler extremely cautiously right now.  Thanos demands your silence, after all. I just wish they’d told that to the poor dude running one of the MCU accounts.

Obviously if you clicked on this article you know to expect discussion about the potential Avengers Endgame spoiler, but, uh, SPOILER WARNING anyway.  We warned you.  No complaints if you keep going, okay?

Also, warning for profanity from the original tweet (we try to keep things PG-13 here, so I guess one f-bomb is okay).

THE CAPTAIN AMERICA ACCOUNT DELETED THIS TWEET WHAT THE FUCK STEVE STANS WE ARE NOT OKAY pic.twitter.com/B80CivveoN

An obvious guess based on the now deleted Captain America tweet is that ‘the end’ means Captain America will die. Everyone has speculated that this happens, but to have an official MCU twitter account tweet something like that feels like a punch to the gut.  It feels like the confirmation of something we’ve all been dreading for years. Then to see that tweet get swiftly deleted? Yikes! What the heck is going on over there? 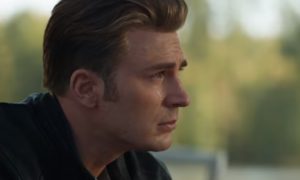 Steve Rogers stans are breaking down on twitter right now.  But let’s be real, we’ve all been bracing ourselves for this pretty much since Civil War came out.  Chris Evans’ contract has ended.  Captain America died even earlier in the comics.  And there are no more Captain America films scheduled right now, whereas many of the characters who got dusted have sequels planned.  Captain America is more than likely going to die and this tweet was just the little nudge we needed to be pushed completely over the edge.  Like, we know guys.  We know this is coming.  We’ve known for a while.  Approach us slowly and treat us gently because we’re fragile right now.

Some fans are holding out hope, though. There could be another interpretation of this suspicious tweet.  Perhaps it’s just ‘the end’ of the current era of the Avengers.  Maybe Captain America is going to leave the team and go live some happy life somewhere with Bucky and they’ll adopt a bunch of dogs and be happy together far far away from the superhero life.  It’s certainly not the end of the franchise as there are several films on the docket, including the highly anticipated Black Widow movie.  That interpretation could very well be true.  It’s somewhat disingenuous to call it ‘the end’ when there’s a lot of films lined up, but I suppose it’s the end for the current generation of heroes.

Even if this tweet isn’t specifically alluding to his death, and it simply means he’s exiting the Avengers and living a happy life elsewhere, it’s a strange tweet to push out and then immediately delete.  It only makes the first interpretation of it feel more likely.  The tweet wasn’t published from the official Avengers account, nor any of the twitter accounts of the other main characters.  It was very specifically about Captain America and nobody else.

Who are you, Mr. Captain America Twitter Manager?  Why did you choose to tweet this?  Is this an Endgame spoiler or did you just make a booboo with your phrasing? Why are you playing with our emotions like this?  Show yourself. I JUST WANNA TALK.

Previous:‘The Handmaid’s Tale’ Graphic Novel Brings Something New To Atwood’s Cautionary Classic
Next: Boomerang 1×9 Review: “Us Too” – Addressing The #MeToo Movement In A Very Powerful Episode