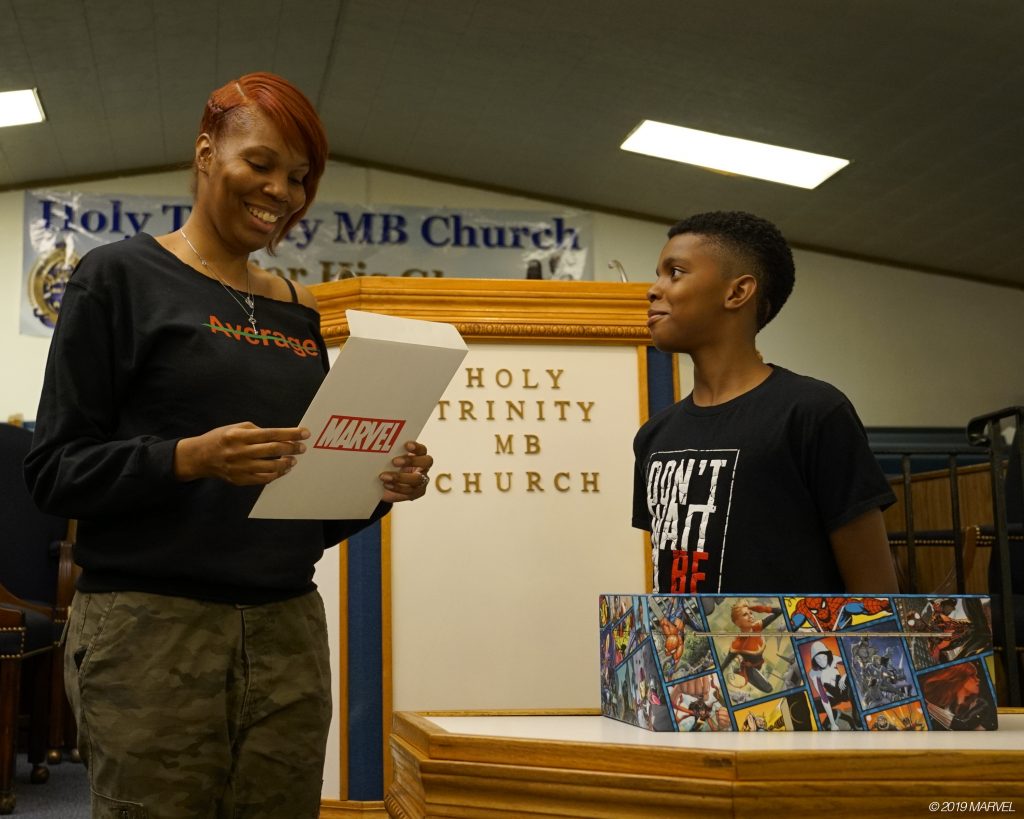 “Make Way For Jahkil” introduces a hero whose huge heart pushes him out of his comfort zone to help other people.

I keep waiting for there to be a “just okay” episode of Marvel’s Hero Project. No show is ON all the time, you know? There has to be one episode where I’m not just full of love and hope for the future at the end… right? Wrong, at least so far. “Make Way For Jahkil” is just as consistently magical as the other episodes.

Jahkil’s family describes him as shy, and someone who had trouble starting tap lessons because he was nervous to go on the floor alone. He doesn’t look shy when he’s out doing his work, which is passing out “Blessing Bags” full of toiletries and personal items to the homeless population of Chicago. He has a quiet sort of dignity about him, and he treats those he meets with the same dignity.

Not gonna lie, I had a bad moment early in “Make Way For Jahkil”. His aunt, Ernestine was talking about taking Jahkil and his cousins downtown with his aunt and cousins to see ‘the other side’ of life. It would be a transformative experience for Jahkil, but all I could think was, “Oh nooo the homeless are not zoo animals!”

Then Ernestine mentioned the soup they were bringing and I realized… no, she was doing an act of kindness and just brought the kids so they would understand. She actually seems like a lovely, caring person, and according to Jahkil that visit was what moved him to start working with the homeless. 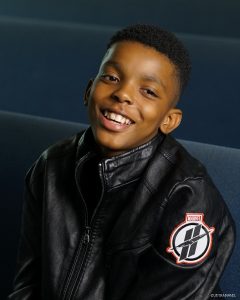 “All the things [the homeless] go through is so sad. It made me have a passion for wanting to help them.” -Jahkil

Mom Na-Tae’ and Dad Jamiel talk about how Jahkil came home from the trip with a different outlook. He wanted to buy all the homeless people he’d met homes. They compromised by drawing inspiration from a friend who was doing food bags for Thanksgiving. Jahkil wanted something a little more enduring for his bags, so they did toiletries and some small comfort items. They thought it would be a one-time thing.

Jahkil had other ideas. He kept asking Na-Tae’ to go back and pass out more Blessing Bags. “I don’t know why I kept wanting to do it over and over again,” he says. “But I knew it was a good thing. It was just in me to want to help the homeless.”

His parents saw it wasn’t a passing desire for Jahkil. They decided to help him find a way to help the homeless on a more enduring level, and Project I Am was born. They reached out to the community- his classmates, his basketball team, his dance teams, and neighbors. Jahkil, once a shy kid who was nervous to dance by himself, put himself out there to ask people to help.

People responded. Jahkil puts on “bag stuffing” events to get Blessing Bags filled, and judging by what we see in the video he has no shortage of helping hands. A lot of those are kids. One of them, his friend Cayen, says he comes because he “likes to help the homeless people of Chicago, and I like to help Jahkil.”

In the beginning, most (if not all) of the items for the Blessing Bags came from family members in the beginning. I was struck by how strongly an everyday family has supported their son’s mission. In the episode Na-Tae’ and Jamiel share that they originally got Jahkil involved in so many activities to keep him out of the gang lifestyle which Jamiel’s family had been involved in.

Those pressures follow him to school, even. His father and basketball coach both talk about how other kids at the school tease Jahkil for being so passionate about helping people. It makes me a little sad to be watching a show about how kids have more power to change the world than people think and also hear about kids choosing to bring others down instead. I hope those guys grow out of it.

There’s a part in “Make Way For Jahkil” where he’s handing out bags at a shelter. I noticed that when he interacts with homeless people he’s very respectful. He greets people politely. He hugs those he remembers. He shakes hands and talks with a smile about the “inspirational speeches” they give him.

“People have got to stop looking at the homeless like, ‘They out here because they want to be out here'”, says G.G. “Jahkil don’t see them like that. He sees them like he sees us. They are people too, and they deserve to be respected like people. So we go by what he says.”

Jahkil’s operation is growing. He did 1500 bags the first year, 5000 bags the next and 6000 the next. Now they’re doing over 10,000 bags this year. That is an astounding amount of work for what’s still a very personal organization that Jahkil and his family are involved in every day. He wants to do 15,000 blessing bags this year. I bet he does 20K.

Project I Am has donated Blessing Bags internationally, including to Africa and Guatemala. Jahkil also gives speeches at schools and in support of major donors to the operation. That’s something that seriously impresses me. He’s a shy kid, but he’s out there talking to crowds and meeting strangers because he knows that translates into more ability to help the homeless.

This kid has a spine of steel to go with his big heart.

Project I Am and the Blessing Bags have drawn a lot of national attention. All the Heroes are in the project because their work grew, after all, and there is a segment talking about all the awards and interviews and honors he got. My favorite is his visit to a Bulls game, where he’s sitting right near the team. He has such a bright, happy look on his face as he’s trying to “be cool” and I love it.

I have to take a minute to talk about the art direction in “Make Way For Jahkil”. Jahkil is a very physical kid- he plays basketball, he dances, he wants to physically go out and help people personally. The way the episode is cut together really emphasizes that. We have these really cool moody backlit dance scenes, brightly-lit basketball court scenes, and then atmospheric panning shots when he’s out in the city.

I’m also happy that- as far as I can tell- the camera avoids making pity pieces of the homeless people Jahkil meets. Most of the time shots are cut in a way that hides people’s faces, and when someone is shown and interviewed they’re properly introduced by name. This is right in line with Jahkil’s philosophy: these are people, and we should respect them like people. 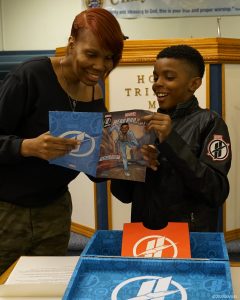 “I’ve always wanted to have super speed because my schedule is off the chain.” -Jahkil

The comic itself is fun in this one. Jahkil gets the superpower of super speed that lets him run his Blessing Bags around the city. The artist includes a lot of cool personal touches, too: Na-Tae’, a Tweet from Barack Obama (that really happened!), a bunch of cool outfits to represent his style. They put in a good amount of effort to make it look cool.

The big presentation is done at a talk Jahkil is giving for Project I Am… or so he thinks. It’s actually a surprise recognition event at a local church. He gets two sentences into his project before the Pastor interrupts him with, “Jahkil, wait. I think it’s time for someone to give you a blessing.” Then they bring out The Box tucked inside a Marvel duffel bag, because the Marvel teams are a bunch of drama queens.

Being a drama queen, I loved it. I also love how Jahkil is so surprised and delighted by the whole thing. All the Heroes have been pleased to get the jacket, but I think Jahkil’s reaction is my favorite so far. He just lights up and throws that jacket right on. Maybe he’s a little nervous- he does zip that jacket up to the neck immediately- but you can see he’s pleased, and his family is so proud. When he sees the comic he goes, “Wait, I have my own comic? From Marvel?… Am I a superhero?”

Yeah, dude. You already were.

If I seem unusually sappy about “Make Way For Jahkil”, that’s because homeless is a personal issue for me. My family was borderline homeless when I was young. We’ve come a long way since then, but I’ve always been keenly aware of the privilege of a roof, warm clothes, and regular food. I have such respect for Jahkil that he has that same awareness without having had the same experience.

This is the kind of empathy we need in the world. Jahkil is the type of hero who can make a real impact on the world, and I’m so happy he’s getting the attention to help him keep doing good.

If you’d like to know more about Project I Am or make a donation, you can do both those things here on their website!

Note: We are provided free screeners of Marvel’s Hero Project for review. The opinions shared are our own.