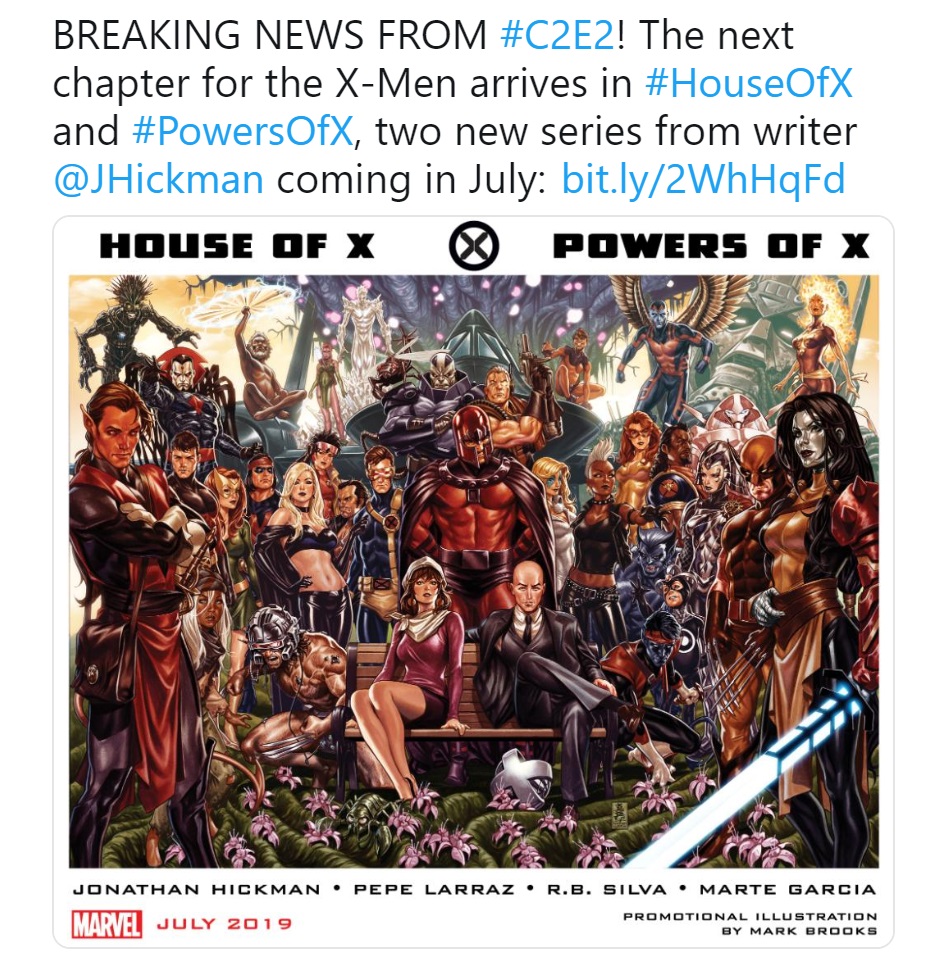 Jonathan Hickman working on House of X and Powers of X (Image: @Marvel)

The X-Men are getting another relaunch from Marvel Comics with Jonathan Hickman as the writer. So, what are the mutants going to experience now? Also, I can’t take most of these big events seriously because they seem to conveniently forget Wiccan exists.

Currently, the mutants are going through the Age of X-Man event which is supposed to be a new beginning for them. I guess that new beginning isn’t going to last long because Hickman’s story will be debuting in a few months. At this point, I do think Marvel Comics has no idea what they want to do with the X-Men. Perhaps, due to the Disney/FOX merger, Hickman’s story will bring the characters to the forefront?

The confirmation about the relaunch was made during Marvel’s Next Best Thing panel at C2E2. Editor in Chief C.B. Cebulski called it “one of the worst kept secrets of the past two weeks.”

Hickman will be working with artists Pepe Larraz and R.B. Silva on two X-Men miniseries. The two books, entitled House of X and Powers of X, will launch this July. A new issue will be released every week.

According to Marvel, they consider the magnitude of the event to be similar to “Giant-Size X-Men, 1991’s X-Men #1, the ‘Age of Apocalypse’ event, or Grant Morrison’s New X-Men.”

Which, yeah, I’ll need to read it to believe it because (for now) it all sounds like promotional hype. Hickman is a trusted comic book writer. So, maybe he will surprise me?

Cebulski shared, “We are excited to have Jon back with the Marvel family, and we could not have asked for a better creative team to help usher the X-Men into a whole new era. While we can’t reveal too much about the story just yet, these new stories will redefine the X-Men and their place in the Marvel Universe. This is a historic moment both new and passionate fans won’t want to miss.”

Before we get to see Hickman’s writing, the War of the Realms event will debut. Again, I can’t take most of these big events seriously because they seem to sideline very powerful reality manipulators to raise the stakes.

Not having Wiccan be a part of Age of X-Man makes no sense to me. Will Hickman forget Wiccan, too?

I don’t know about you, but seeing Marvel Comics continuing to ignore a queer mutant character (for years), especially when mutants are concerned, isn’t a good look, in my opinion.

I’m also interested in seeing how Hickman decides to handle Storm after all of the work Coates has done to develop her.

Previous:Mamoru Miyano Revealed as Star of “Human Lost” in Most Apt Casting Ever
Next: “Dora And The Lost City Of Gold” Trailer Makes Me Want To Watch This Film!