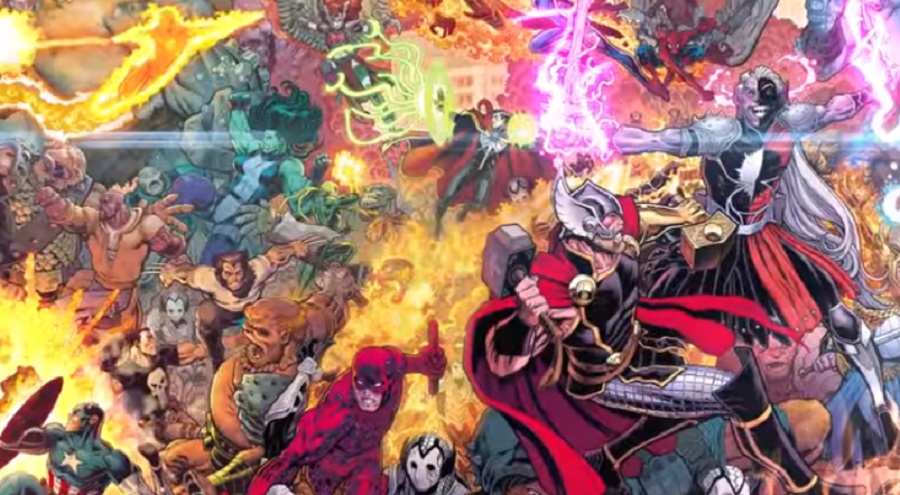 War of the Realms is a major event Marvel comic book fans will be able to read come April 2019. A trailer has been released and it features many famous characters helping Thor fight powerful villains.

If you have been keeping up with the Thor comic book series you would know writer Jason Aaron has been working toward the War of the Realms event for (at least six) years. Now, the time has come for the war to occur on Earth. Of course, the good guys will win, but it will be interesting to see what everyone is able to do to save the world.

The dark elf Malekith will finally invade Earth. He has been on a mission to destroy many mythical realms. Again, I recommend picking up Thor, it has been fun seeing Malekith spread his evil. Anyway, the heroes of Earth/Midgard are going to give him a tough time.

“The story really begins when that war that’s been brewing for years in the pages of Thor explodes here in Midgard,” said writer Jason Aaron. “And at that point, it’s bigger than just a Thor battle: everyone, everyone, becomes a part of that battle.”

Editor Will Moss shared that even though the upcoming event has been brewing for years, the story is still going to be accessible to new readers.

With the event being promoted as a war to end all wars, Storm (a Goddess) better be present in it. Also, I need to see Wiccan and Hulkling come back to help the heroes. It doesn’t make sense for Marvel to bench such powerful characters, especially Wiccan. Apparently, according to Champions, they have been enjoying a vacation together off-panel. While I’m happy about the two spending more time together, they need to come back and do something.

Make sure to keep an eye out for the War of the Realms event by Aaron, Russell Dauterman, Matt Wilson, and cover artist Arthur Adams launching April 2019.

Previous:Sandra Bullock’s ‘Bird Box’ Breaks Original Film Viewing Record On Netflix!
Next: A By-The-Numbers Look At The Disaster That Was ‘Voltron’ Season 8