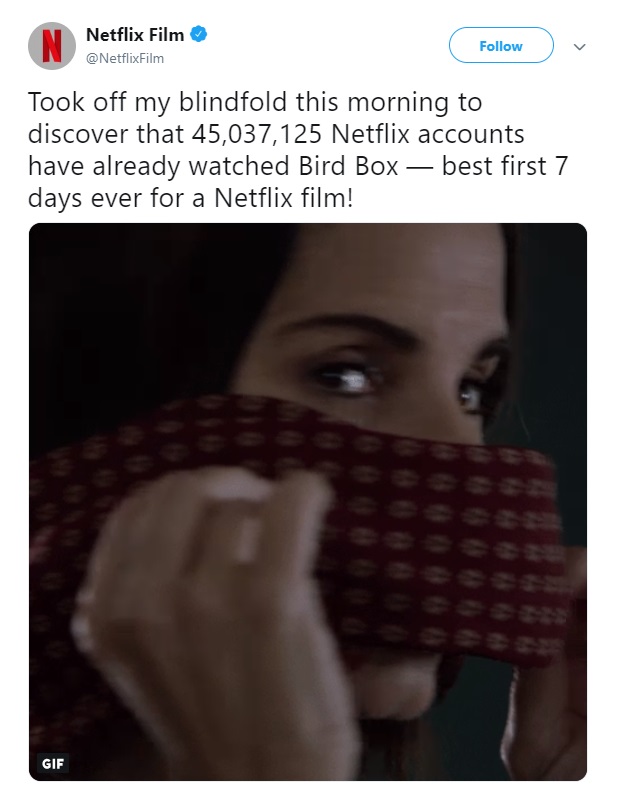 Netflix seems to be very happy with the performance of Bird Box. The Oscar-winner Sandra Bullock-led thriller was watched by more than 45 million Netflix subscribers in the first seven days of release.

With newer streaming services entering the market, it will be interesting to see how Netflix fares down the line. Disney will be taking back its films from the current streaming juggernaut. I’m ready for a streaming war!

Until then, one of the reasons Netflix has been able to attract eyeballs is the streaming service’s original content which ranges from kid-friendly content to more mature fare. While not every property is able to become a worldwide success, Sandra Bullock’s Bird Box was able to perform impressively.

It was revealed in October that Netflix has more than 130 million paid subscribers. This means over one-third of them watched the thriller in seven days.

Bird Box is based on a novel of the same name by Josh Malerman. The movie features the arrival of mysterious forces which leads to people taking their own lives. Bullock plays the lead as Malorie who, while pregnant, ends with a group of survivors. The film’s narrative incorporates scenes involving Malorie trying to take two kids to safety (in the present) as well as how she was able to survive for so long (the past).

Released worldwide on December 21, 2018, Bird Box is by no means a perfect movie. It isn’t even that scary. However, it is still a great title to enjoy if you are hanging out with friends and you all want something thrilling to watch. Bullock does an incredible acting job as Malorie.

Of course, there are some who say the tweet promotes false information to continue the hype because Netflix is yet to be transparent about actual viewing numbers.

Let’s see how the interactive Black Mirror: Bandersnatch does.

Have you watched the Bird Box yet? What did you think of it? Let us know.