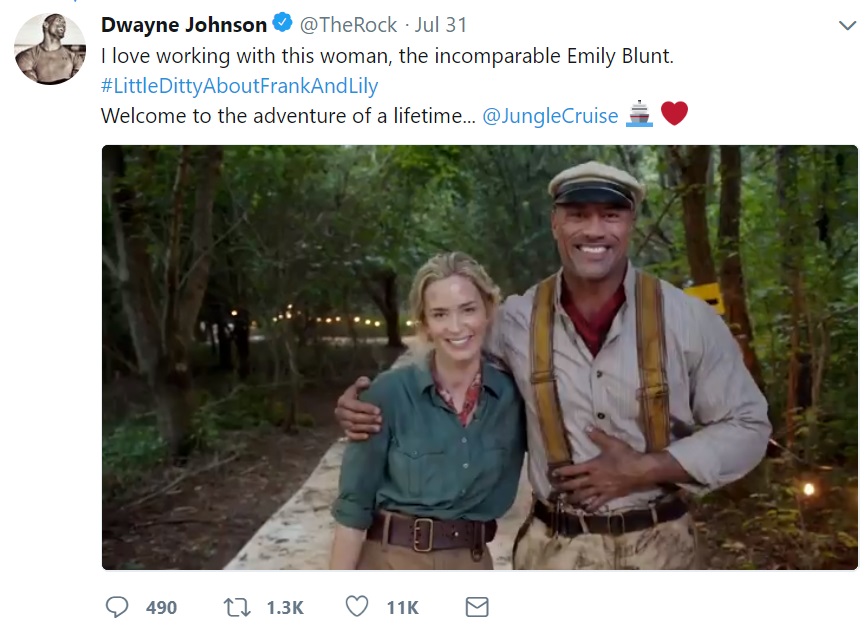 Back in August, Disney’s upcoming Jungle Cruise film received some backlash when it was revealed the studio had cast a straight actor to play a gay character. Now, reports have surfaced about poor queer representation as well as the $13 million pay gap between the Rock and Emily Blunt.

While we still have to wait until 2020 for Jungle Cruise to be released, the press the upcoming Disney offering is getting hasn’t been very positive. The first wave of backlash it received dealt with the studio’s decision to cast Jack Whitehall, a straight actor in a gay role. Now, I get there are people who think an actor’s sexuality shouldn’t be a factor when it comes to casting. However, Hollywood’s casting process is already biased, and you need to look at the bigger picture here.

Jungle Cruise features a queer character who is going to (possibly) have a considerable amount of screentime. As this is a Disney production, it would have been better to have an openly out actor to portray such a role as far as overall queer representation on the big screen goes.

And I understand why certain people use the ‘choosing-the-best-actor-for-the-role’ argument, but it doesn’t work here because we all know Whitehall won’t be delivering an Oscar-worthy performance anyway. Also, casting an out actor could have helped soften the likely PR blow down the line if a certain report by TMZ is to be believed.

Apparently, Whitehall’s character will come out without saying the word ‘gay’ or being clear about his sexuality. Yes, Jungle Cruise is set in the past and he can’t be very open. But as this is a Hollywood production, I wouldn’t be surprised if his coming out is another example of queer coding and thus, the audience will continue to believe he is straight.

Furthermore, another report shares Dwayne Johnson was paid a whopping $22 million for Jungle Cruise while his costar Emily Blunt was only paid $9 million. Past box office appeal and award recognition are factors when deciding payment, but a $13 million pay gap is too much in my opinion.

Disney could have worked out certain backend deals for Johnson (who is a bigger star than Blunt when it comes to box office performance) and paid the award-winning actress better than that!

With a current release date of July 24, 2020, I wonder if Jungle Cruise will be able to make a mark at the box office or if PR backlash will hurt profitability.