Anthony Oliveira to Bless Us with a Wiccan & Hulkling Story in “War of the Realms: War Scrolls” Issue 2! 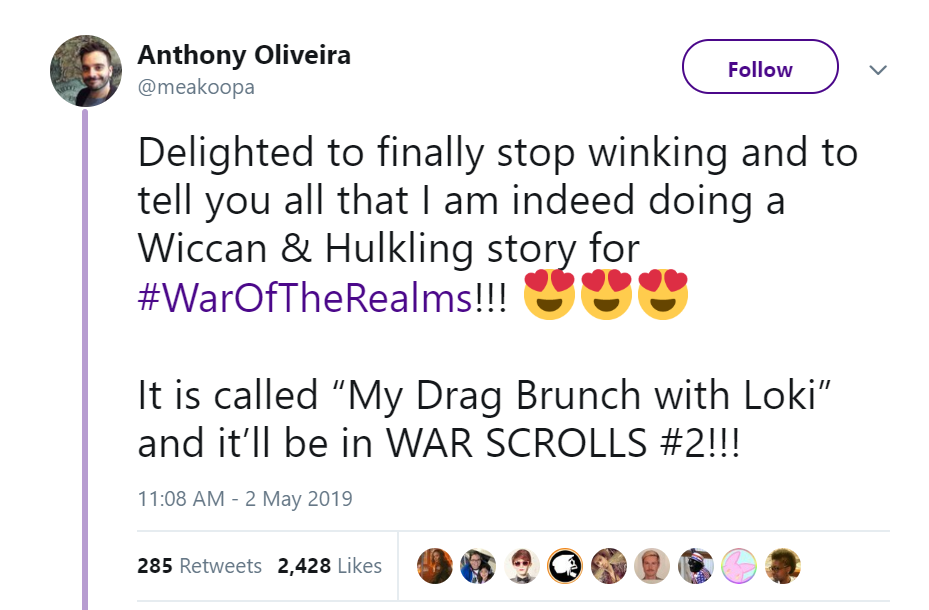 Anthony Oliveira understands a Marvel Comics reader’s need for a Wiccan and Hulking story. He will be featuring the two characters in a tale titled “My Drag Brunch With Loki” during War of the Realms: War Scrolls Issue 2. I can’t wait!

You have no idea how much I have prayed for Marvel Comics to tell a story with Wiccan (Billy) and Hulkling (Teddy). It is one thing to ignore certain characters on a monthly basis (which I can understand depending on what other writers want to create). However, when major events occur in the Marvel Comics Universe, it makes no sense for writers to bench one of the most powerful couples out there. Wiccan is the freaking Demiurge while Hulking is the King of Space, for crying out loud.

The last time we saw Billy and Teddy, they were gifted an apartment by Sunspot in New Avengers Issue 18, which was released back in 2016. After that, as far as I know, the two have been mostly absent from the present timeline.

A future version of Billy appeared in the Doctor Strange and the Sorcerors Supreme comic book series which ran from 2016 to 2017 for a total of 12 issues. In that story, Wiccan was married to Hulkling and they were raising a kid together.

However, again, Billy and Teddy remained largely absent from the present timeline. With the future timelines of Marvel Comics showing Wiccan as a member of the X-Men, I was expecting him to appear during 2016’s Inhumans vs. X-Men event, but he didn’t.

I have no idea why Billy, a mutant himself, wouldn’t offer his help during such dangerous times for mutants around the globe.

I was expecting him to appear when Nate attacked the X-Men in 2019, but he didn’t. He hasn’t shown up during the current Uncanny X-Men series either.

I mean, when the world is in trouble (especially the entire mutant kind), shouldn’t Wiccan be on every hero’s emergency contact list? 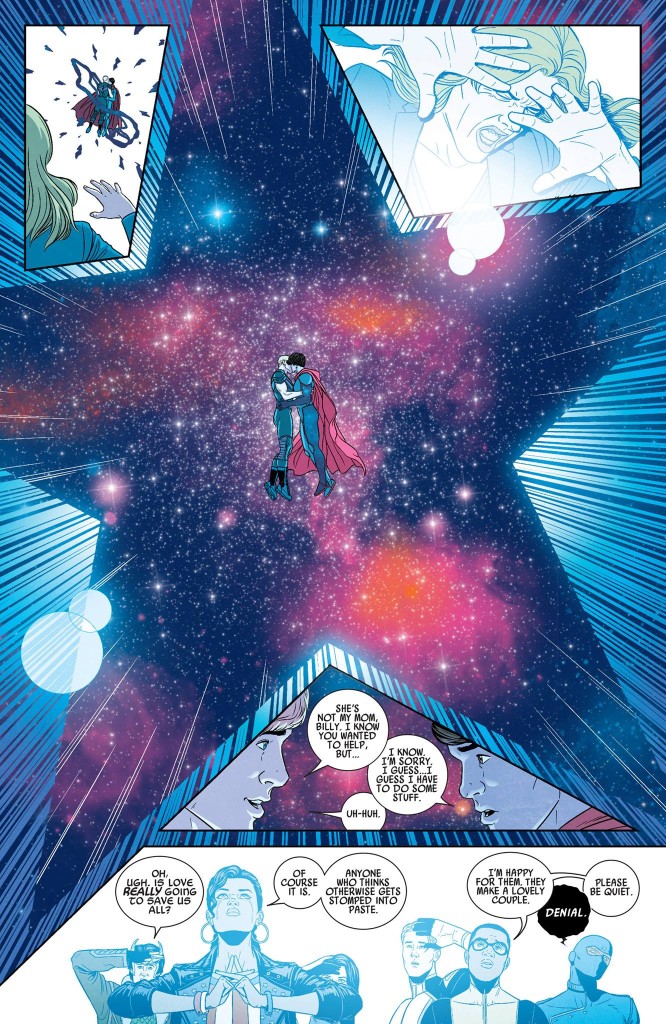 It also felt odd when Billy and Teddy were nowhere to be seen when War of the Realms began. Wiccan and Doctor Strange should be working together.

At least the good news is Anthony Oliveira will be setting things right this month. His story “My Drag Brunch With Loki” will appear in War of the Realms‘ tie-in War Scrolls Issue 2.

I don’t know what kind of Wiccan, Hulkling, and Loki tale it is going to be, but I’m very interested in reading it.

I hope we get some answers about what Wiccan and his fiancé Teddy have been busy with for them to not help Earth.

Vivian, Wiccan’s half-sister (in a technical sense) mentioned during Champions they were off vacationing somewhere. I mean, come on! Get it together, you gays!

Also, the two are still engaged, right? I ask because Viv did refer to them as boyfriends instead of financés.

Anyway, Hulkling was recently seen fighting alongside his Young Avengers/New Avengers teammates and Dr. Brashear in Germany during Avengers: No Road Home Issue 10, which was released in April 2019.

Go ahead and pre-order it!

Previous:Bungo Stray Dogs 3×04 Review: “My Ill Deeds Are the Work of God”
Next: “Marilyn” Is an Uncompromising Take on a True LGBTQ Tale – Movie Review