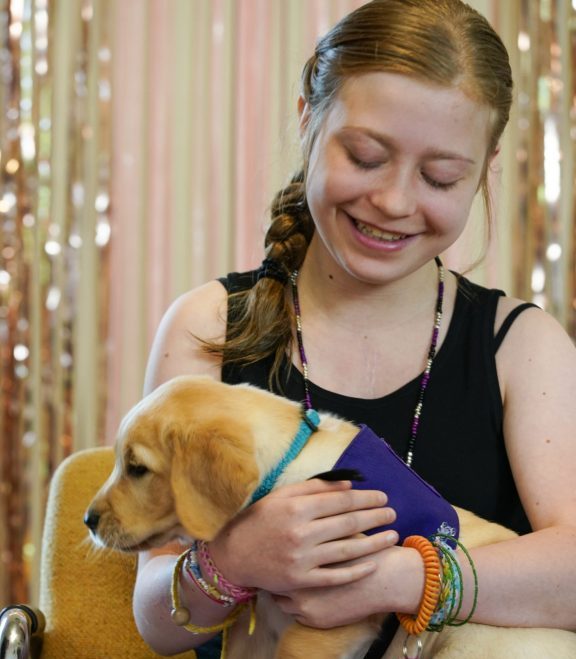 I’m going to warn all of you up front. “The Dazzling Lorelei” is heart-wrenching. Lorelei is a true inspiration, but you’re 100% going to need to bring some Kleenex to this one.

A few days before “The Dazzling Lorelei” dropped, the media folks over at Disney+ sent me (and I assume other members of the press) a present. It was a pack of tissues in a Marvel’s Hero Project box. I laughed a lot, then set the tissues aside as the joke I thought it was.

Turns out, they just had a better idea of the episode schedule than I do. I am halfway through that tissue pack already. This is an intense episode – so intense that I’m going to lay out a quick trigger warning.

I haven’t done this before because the implied warnings have always felt a little obvious. “Mighty Rebekah”, for example, touched on themes of transphobia. Lorelei’s mission is simply described as “Cardiac Care”, so I want to give people a small head’s up about something going in.

Lorelei was one of twins. Her brother Rory died in utero, but the doctors spotted Lorelei on the last ultrasound and were able to save her. The family talks about Rory with love, and his passing is treated with a lot of sensitivity, but if that’s a trigger for you you can skip to the 6:25 mark.

If you can, though, watch straight through because this family will make you fall in love with all of them. I don’t know if it’s just editing (though I suspect it’s actually them). All I know is they seem like a gentle, accepting, loving group of people who’d be awesome friends and neighbors.

I like the episodes where you can look at the family and see how the kids became a Hero.

So, here’s the overview: Lorelei has hypoplastic left heart syndrome (HLHS). After her third heart surgery, she was given a heart pillow to hug. It’s supposed to provide soft bracing to ease the pain of healing ribs. The pillow Lorelei got was too big for her, though. Mom Chelle was teaching her to sew, and they made a pillow small enough to be useful.

That’s where a lot of people would have stopped.

For Lorelei, though, making pillows for others was a natural next step. She started making one pillow a day herself, then began recruiting others to sew according to her patterns. There are different sizes and patterns, so every patient can find something that works for them.

“I am not thinking I’m giving them my literal heart, but yes, I give them bits of my love, and joy, and that never runs out,” Lorelei says. “Think about it. If you give love, you get love. If you give happy, you usually get happy.”

Her organization Heart Hugs now provides heart pillows to hospitals on every continent except Antarctica. She’s delivered over 50,000 heart pillows, and raised over $150,000 to help sick children.

On top of that, Lorelei is also involved with military veterans she met while at the hospital. Two of them have become so close they’re now part of the family.

The episode shared a lot of pictures of her talking to various politicians, but it’s a little fuzzy on what specifically she was doing. I had to duck over to her Heart Hugs page, which tells me she advocates for better cardiac follow-up care for Wounded Warriors.

Watching “The Dazzling Lorelei,” it’s easy to see why Marvel was drawn to this kid. She seems almost entirely focused outward. What she can do for others, how they’re feeling, what they need – all of that is more important to her that what’s going on with her.

Lorelei’s father, Steve, talked about watching her walk around the hospital talking to other patients during her own visits. “She didn’t talk at all about herself, what she felt. She asked them, ‘How are you? What are you feeling?’ She just shares hope.”

“She thinks about, ‘When I wake up today, who am I going to help?'” says Chelle. “That’s truly her legacy. Do what you can to help other people, and that’s all we can really control in life.”

Her efforts would already be a big deal. They’re especially remarkable because Lorelei is going through a LOT herself. She still needs ongoing cardiac care, and something as small as a virus almost killed her last year. She has significant memory loss caused by repeated cardiac arrests.

The memory loss is so bad that her parents keep a scrapbook with letters and tokens from kids Lorelei has helped. Chelle reads it to her sometimes. There’s a little heartbreaking moment in the episode when Lorelei gets upset she doesn’t remember any of the kids and asks to stop for the night.

The editing of “The Dazzling Lorelei” is a little different from the rest of the season. The family is still sharing their story, and it seems to be the way they want it, but it does seem more directed. Marvel’s presence is visible in a way it’s usually not.

For example, there are more captions in this episode than usual. Most of them deliver bad news that maybe Lorelei or her parents didn’t want to say, but is relevant to the story. A big one lands right when she’s upset about not remembering her “fans”.

Lorelei isn’t eligible for a heart transplant. Her condition has a generally negative prognosis – she’s just going to get worse. There’s no telling how much time she has.

I think this is why the show takes such a forward approach this episode – to shield the family from having to talk about the heavy things they’re facing while trying to celebrate their daughter. They deal with this every day. Why make them live that on camera more than they want to? It’s hard enough watching Chelle break down while talking about how badly she wishes she could give Lorelei her own heart.

All this hanging over Lorelei’s head, and her energy is still directed to others. This kid, you guys…. she’s really something special.

This sounds traumatic as all get out, but I promise this is something you can watch with your family. Because of the subject matter there are lots of wires and tubes and talk of serious medical conditions, but the episode is skillfully shot to avoid anything too graphic. Kids can still watch this.

I would actually encourage it. As Elijah reminded us a few episodes back, kids are able to do and understand more than adults think. “The Dazzling Lorelei” is definitely on their level.

Marvel hits their usual mark of open, empathetic storytelling. The comic is done in Lorelei’s preferred bright colors and pastels. They give her the power to magically imbue thread with love, which is then sewn into her pillows. She also gets a sidekick in the form of her service dog Mandu.

Mandu is the inspiration for where they present The Box, too. Lorelei had a birthday party planned at Susquehanna Service Dogs, where she also apparently volunteers. As a present they gave her naming rights to AN ENTIRE LITTER of service dog trainee pups. Minus one named for her twin, Rory, because we weren’t already crying.

Listen, that’s huge. I have a service dog, and the people who trained him for me have a list of procedures for naming dogs. Each litter has a letter theme, people put in suggestions which are debated and considered and voted on… it’s a Thing. The only way to bypass that is to “sponsor” a dog which gives you the right to give a few names to choose from.

Even if Susquehanna does things differently, giving Lorelei a whole litter to name tells me how much work she’s done for them.

Moving on… so Lorelei gets “The Dazzling Lorelei” comic (which is actually called Threads of Hope) and is immediately thrilled to see Mandu. After reading it, her favorite part was the same as her mom’s – that other kids were included in the comic.

That’s basically Lorelei in a nutshell. She’s most excited and interested in other people, and how they can be helped. This is such a beautiful episode, you guys. It made me grab some nerdy fabric from my stash and cut out a couple pillows to send out as well.

Grab some tissues and go watch. If you’re at all crafty, I bet you’re about to do the same thing.