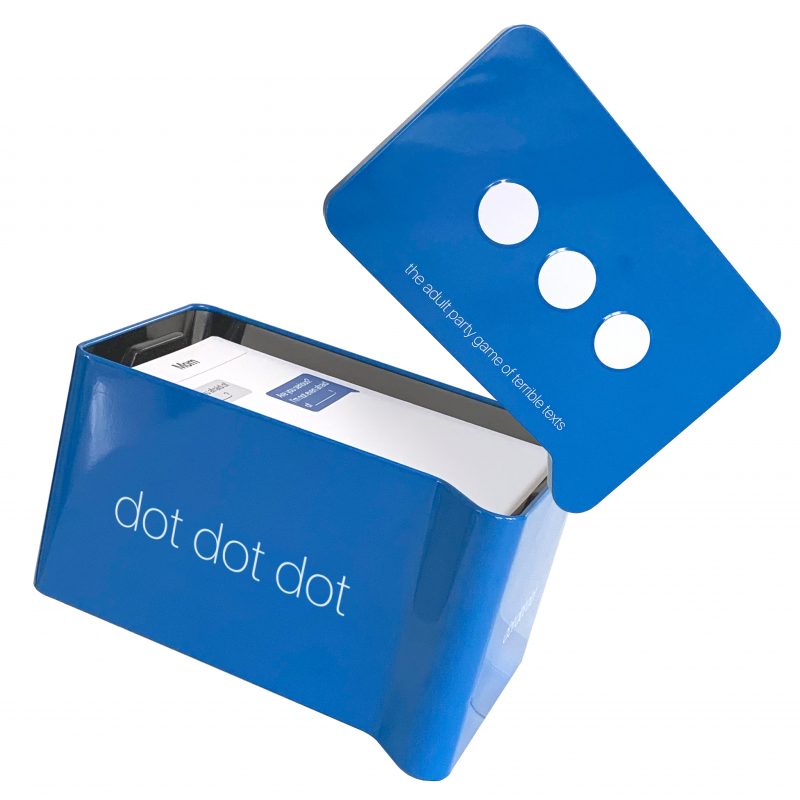 There has been an abundance of adult card party games in recent years. Every so often one will be released that stands out a little from the rest. Dot Dot Dot by Player Ten is such a game. While it does have its similarities with Cards Against Humanity, the text message format adds a fun twist.

I was provided a free copy of this card game for review. The opinions are my own.

The game comes in a nice metal tin that contains 60 conversation cards with 300 answer cards for filling in the blanks. It is meant for 4+ people, but we were able to play just fine with three people by amending the gameplay a little bit. The gameplay lasts about 30-60 minutes or so. 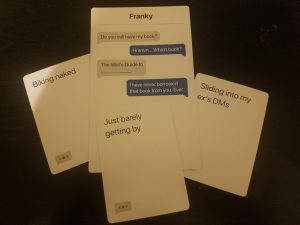 This is a party game that is quite obviously for adults and probably not one to play with your mom. Some of the cards are inappropriate, so consider your company before playing. It reminded me of many of the funny text conversations people share on social media. The conversation cards contain one or two blanks each and that’s where people’s creativity comes in.

The rules are simple. One person acts as the Judge. That person selects a conversation card, reads it out loud, and places it on the table for the other people to see. The rest of the players select an answer card per blank on the conversation card and hand it over to the Judge (face-down).

Just like Cards Against Humanity, the Judge will then select the best submission. The player whose card was selected will receive one point. The first player who reaches eight conversation card points is the winner.

With three people, we played the same way. It still worked out fine and we had plenty of laughs. With the sheer number of answer cards involved, there is a high replay value. Plus, there’s no reason why you can’t just keep playing after eight points!

Dot Dot Dot is definitely a lot of fun as long as you’re in a group of people who are not easily offended. It’s a fast-paced hilarious game to play. I highly recommend it to anyone who enjoys adult card games.