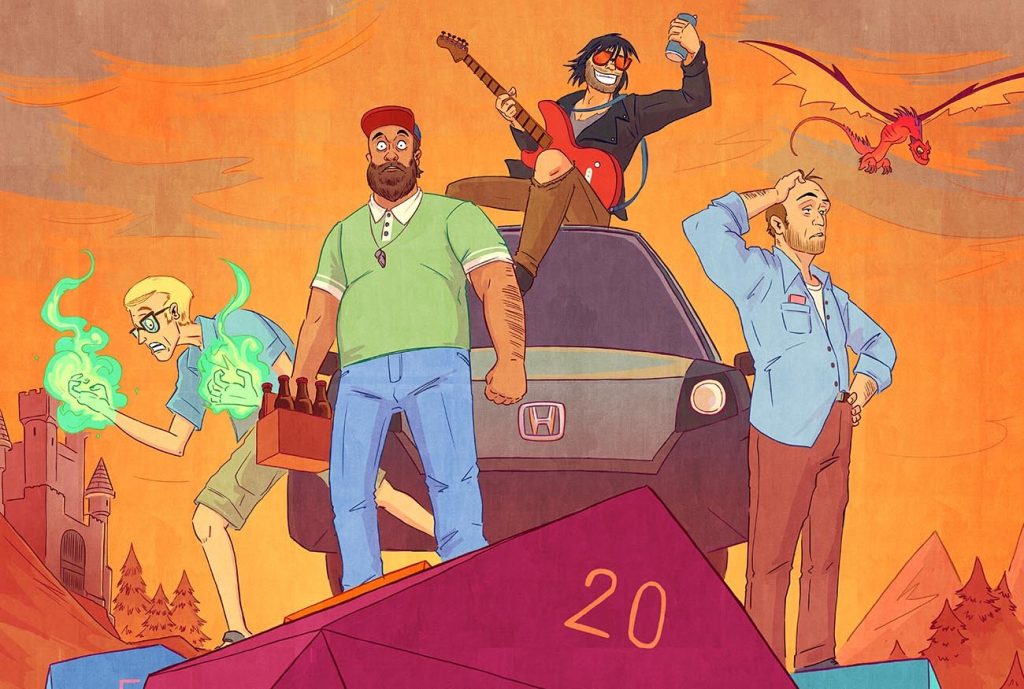 Dungeons and Daddies is an improvised Dungeons & Dragons podcast that’s been going since January 2019 and at the time of writing, we’re 43 episodes in. Fans of fantasy blended with comedy will have an absolute ball listening to it; if you enjoy The Adventure Zone, Mission to Zyxx, Hello From the Magic Tavern, or Not Another D&D Podcast, this baby is right up your street. Here are 8 reasons you should definitely binge it – followed by one reason you really, really shouldn’t.

1. It Doesn’t Matter How Much You Know About Dungeons & Dragons

The podcast doesn’t require any knowledge of Dungeons & Dragons to enjoy it. Never played before in your life? No problem. You can dive right in and pick it up as the story goes along. Played a couple of times before, and want to familiarize yourself with how it all works a bit more by listening to a podcast? Perfect, you got it. Experienced D&D player? … OK, to level with you, you will be waiting a very long time for a sneak attack that may never come. It’s a fairly significant amount of time before the bard realizes he can give other characters inspiration. The way they play the game focuses on story more than rules and strict D&D mechanics – but when the story’s this good, it’s worth it.

2. The Daddies Are Magnificently Dad-ish

The party consists of a barbarian sports dad, a rock’n’roll bard dad, a granola-munching hippie nature druid dad, and an emotionally-detached stepfather (and rogue). Each of these player characters manage to be amazingly, frustratingly, intensely dad-like in their own separate ways. When I heard the concept of the podcast, I was kind of put off by the idea of listening to a show that had an all-male main character line-up – and I totally get why that might be a stumbling block for a lot of people. All I’ll say is that the show is aware of itself and asks questions about fatherhood and what it means to be a dad all the way through, sometimes poking fun and satirizing patriarchal ideas, and other times letting the characters have moments of sincere battle against toxic masculinity.

3. The Humor Will Have You Laughing to Yourself Hours After You Finished an Episode

Here is a list of places I’ve received strange looks because I couldn’t hold in my laughter at Dungeons and Daddies: literally anywhere I’ve listened to an episode of Dungeons and Daddies within earshot of another human being. I don’t want to spoil any of the jokes with a garbled retelling, so I’ll just tell you that I look back with particular fondness on the time the answer to a puzzle was the ultimate dad joke, the time Beth May sang Silent Night, and the time I first heard the concept of a Reverse Ratatouille.

4. The Podcast Sounds Great, Right from the Start

If you’re a fan of podcasts in general, you’ll know that it’s common for an otherwise awesome show to suffer from audio issues, especially when it’s still young – sometimes it’s that one person with a worse microphone than the rest, or it could be that everyone’s talking over each other so things get lost, or just that everything is a bit fuzzy and scratchy. Not so with Dungeons and Daddies! Seriously, the podcast just sounds absolutely amazing right from the start. When they use music, it’s always so well done – the remix of See You Again really stands out for me – but each episode is always produced to a ridiculously high quality.

5. The Non-Player Characters are People You Just Have to Meet

I am going to tell you something that, on its own, should be enough of a reason to listen: one of the non-player characters is called Yeet Bigly. Honestly, if that isn’t enough, nothing will be. I should’ve led with it. And yes, there’s also a kickass witch, a scammer called Scam Likely, and a tiny child who will tug on your heartstrings and cut your Achilles tendon. But, first and foremost, I repeat: Yeet Bigly.

6. There are Moments that Will Have You Legitimately Emotional

The podcast is mainly light-hearted, but this is Dungeons & Dragons, so there are moments here and there where genuine emotion sneaks in. Some of the non-player characters’ relationships with the dads get tangled and messy and interesting and bittersweet as the podcast goes on. And the relationships between the fathers and their sons have a lot of depth to them – in particular, as someone who’s struggled with my mental health, the way that one character’s depression is portrayed has really meant a lot to me. In amongst all the laughs, there’s room for some things to be said that have stuck with me, things that are truly heartfelt. The voice acting from the podcasters is just so, so good when the story calls for it. Which leads me neatly right on to…

7. The Dedication to the Show is Noticeably Awesome

Only some of us in this world know what it’s like to really commit to a project, to throw yourself completely into a creative endeavor and see it thrive on the love you’re giving it. The folks behind Dungeons and Daddies must know just exactly how it feels. Anthony Burch as Dungeon Master crafts game mechanics, plot points, and character moments with obvious skill and care. Freddie Wong, Beth May, Will Campos, and Matt Arnold each have a commitment to their characters that shows in different ways. I love the podcast for a lot of reasons, but I think the first time I knew I was really and truly locked in was when the whole gang left their recording set-up to go find a stairwell so that they could drop a bag of dice down it, to properly simulate a similar event in the world of the podcast – their yells and laughter as the dice fell put the biggest smile on my face. But it’s not just that they’ll go the extra mile to accurately replicate dropping a bag: the improv, the emotional scenes, the characterization – I could go on and on, every part of this show feels like it matters to the people making it.

8. The Story Itself is Meaningful, Mysterious, and Twistier than Chekov’s Snake

Every time I think I have a handle on the show and I know what’s going to happen, it zigs and then zags on me. I finished listening to the latest episode about half an hour ago, and I’m still having to pause every couple of minutes just to stare at my ceiling and think, oh my god, what are they going to do? I did not see that coming. There are some stories where, after a key plot point is dealt with, everything starts to feel a bit vague and directionless; Dungeons and Daddies has hurdled every one of these moments beautifully, each time deepening the mystery and leaving me with more questions than before. And Anthony Burch just excels at the twists that leave me mouth agape, wishing I had a way to skip ahead two weeks to the next episode.

Each one of these reasons has been pretty much just me rhapsodizing about the podcast – I regret nothing, and stand by everything I’ve said. However, in the interests of fairness and transparency, here at the end I feel as though I should also mention something else: the reason why you really, really shouldn’t listen to Dungeons and Daddies.

1. You Will Really Want to Recommend It, and It’s Called Dungeons and Daddies

Once you’ve listened to the podcast, you will feel the urge to share your love for it with others. You’ll want to spread the word of its hilarity to your nearest and dearest. The thing is, what you’re trying to recommend is called Dungeons and Daddies, which won’t seem like much of a problem until you are saying the name out loud, with your human mouth, to another person who hasn’t heard of it yet. But you’ll power on through, because you know. You know. Once they get to the problematic vampire, or the Pyramid, or Anthony’s truly stupendous attempt at a French accent, it will all be worth it.

You can find Dungeons and Daddies here on Spotify, or wherever you like to listen to podcasts. For more Geekiary podcast recommendations, you can check out our tag, or our list of podcasts and other media to help get you through 2020! 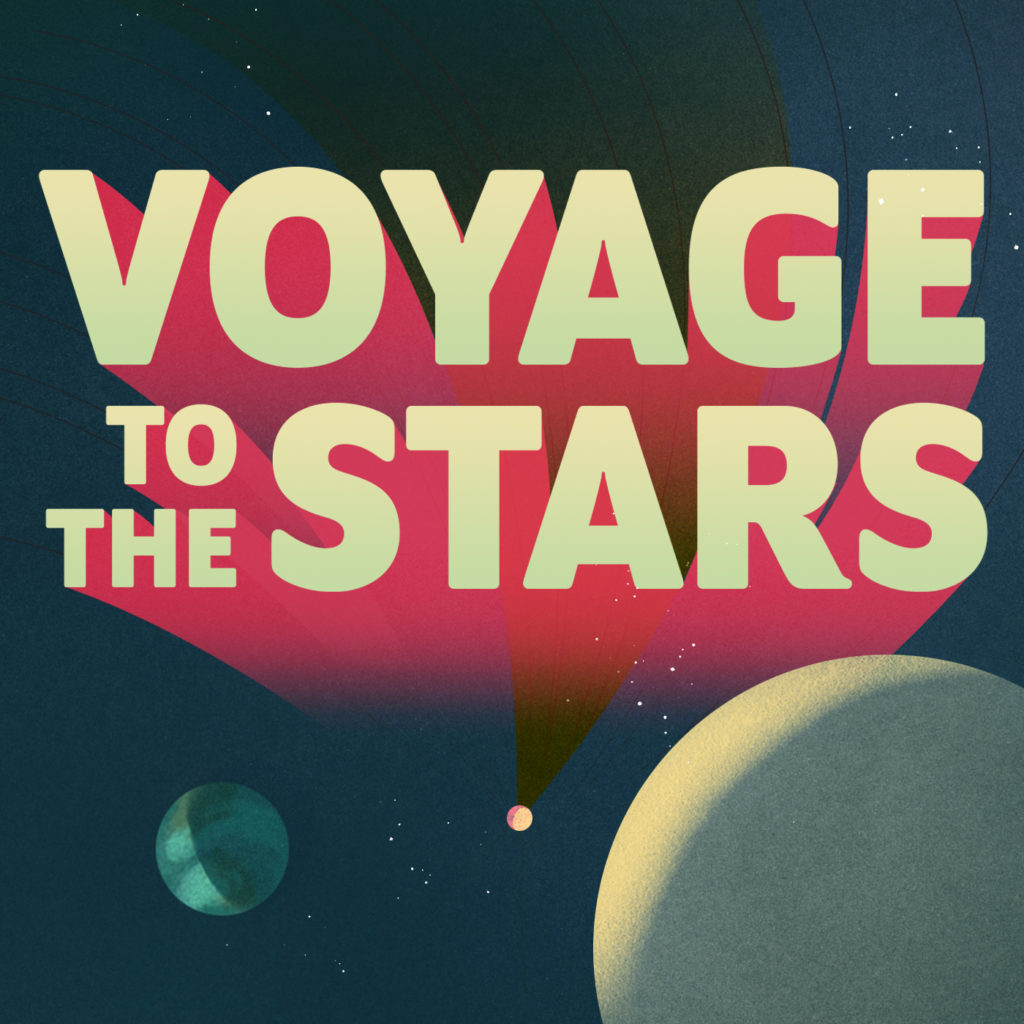