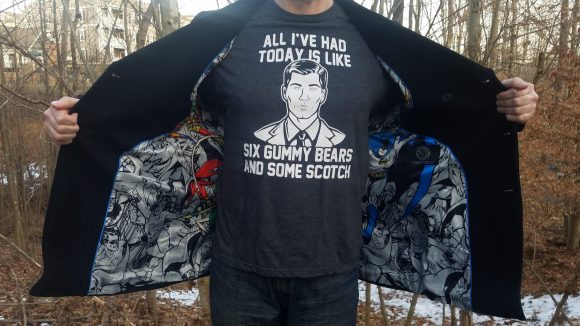 Fun.com has been on my radar for a little while. A friend was complaining that women have places like Her Universe but men don’t have a similar option for stylish geeky clothing. (He’s wrong, by the way, there’s a ton of nerdy men’s clothing.) I fell into a research hole that included their Secret Identity jackets.

So when Fun.com offered some merch for a review, that’s what I picked.

Disclaimer: Fun.com sent us the products in this article for free. The opinions are mine (well, ours).

The Secret Identity clothing are some of the items Fun.com is best known for. Basically, it’s suits and outwear with fandom fabric interiors and subtle nerd touches on the outside. The hook is that you can wear them places it might not be appropriate to wear casual geek swag (like work meetings or nice dinner dates).

It’s a cool idea – as long as the “appropriate side” of the jacket is nice enough to actually wear those places. To see how well the jackets hold up, we took a couple out for a walk in the woods followed by dinner.

These are the two we tried: 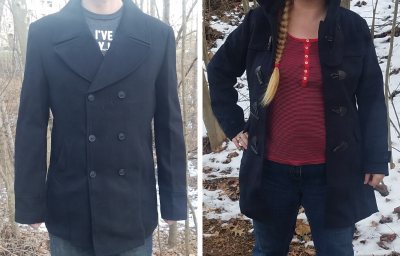 Quick note: the Wonder Woman duffel coat isn’t actually from one of the Secret Identity lines. The inner lining has a pattern instead of the bright comic prints. I chose it so we could test out something with a hood for variety.

Both jackets arrived together in a large box. Each was wrapped in plastic inside the box. The duffel coat was folded in a plastic bag while the peacoat has a garment bag.

I have to be honest, the peacoat made a much better first impression. I’ve gotten tons of clothing that came in a plastic bag and didn’t think twice… but seeing the peacoat in that nice hanging bag made the duffel coat look a little less special. I wish both had come wrapped like that.

HOWEVER, once they were out of the bags, both were in good shape – no hanging threads, no missing buttons, and no snags in the lining.

There were a few shipping-related wrinkles (which I left in the pictures so you can see). Most of them were gone after being hung up for a night.

The Justice League peacoat is a wool blend with polyester lining. It’s thick but not itchy. We have a coat rack in the entry and the peacoat holds up well when hung on that.

It’s a really sharp-looking coat. I’m a sucker for double breasted coats, and combined with the wide lapels the peacoat has a Gotham-esque feel. My other half likes it enough that he agreed to take pictures in it (which has never happened with anything I’ve reviewed, so there’s that).

One issue: the buttons are kind of “meh”. They’re made of a hard plastic and, while they look good, they don’t feel as nice as the jacket does overall. I think this was a place the coat could have added a little style.

The Wonder Woman duffel coat is also a wool-polyester blend. It has a very different texture, though – silky with a slightly glossy look. I want to describe it as “shaved minky”, if that’s a thing? It’s definitely something you’re either going to love or hate.

After thinking about it, I’m on the “love” side, mostly because it resists stains better than I expected. (I may have dipped my sleeve in queso.)

I’ve bought similar coats (it’s a style I like) and this one ranks pretty high in terms of quality vs price. It has a lot of small nice touches, like a strap to keep your neck warm and patterned lining inside the pocket flaps and under straps.

The size chart was right on target, too. I generally order a size larger than suggested, and though I didn’t this time it still fit. It does have a slim cut, though, so if you don’t like that you might actually want to size up.

If you haven’t bought a new suit in while, you might not remember you need to snip the tack stitches holding the peacoat pocket closed. Those are just there to help the suit lie flat. I guess you could leave them in if you want… but then, you wouldn’t have pockets.

And these are great pockets! There are two big ones on the outside and smaller breast pockets inside. A phone easily fit in every one. If your wallet is fat, it will mess up the lines of the coat unless you put it in the outside cargo pocket.

The duffel coat surprised me by also having four pockets – kind of. The two obvious pockets hold a phone or wallet. A thin wallet would fit with the phone in one pocket, but mine is a behemoth so I had to split them up.

You can also tuck something smaller in the parallel pocket that opens from the side of each cargo pocket. You’d mostly want to put your hands here, I think, but it’s cool to have options.

There isn’t a temperature rating for either jacket on the Fun.com website, so I don’t know how cold these are meant to handle. When we went out it was 41°F (38°F if you account for wind). Neither of us felt cold while we were walking through the woods, though it was a little chilly when we stopped.

The peacoat wouldn’t be warm enough to handle any colder than 40° if you’re going to have to stand around. The duffel coat can go a bit lower – I didn’t even want to close mine while we were walking.

I could pick apart little things – the peacoat buttons, the strange minky fabric on the duffel coat, the packaging disparity – but let’s be real. Neither of these coats is over $40 (smaller sizes start at $14.99). You’d be hard-pressed to find a non-fandom jacket of this quality for that price.

In a weird way the price is my biggest concern. These aren’t insanely high quality, but they’re much nicer than I expected. It feels like there has to be a catch somewhere. Maybe they fall apart when you dry clean them, or develop some kind of weird piling after a few weeks, or a small gnome living in the lining comes out at night and erases all your game saves.

All right, I’m getting carried away. They seem solid enough for now, and it’s not really fair to judge based on paranoia. I would love to see pictures if anyone has an older Fun.com jacket, though. Get in the comments and let us know how it’s holding up!

Overall, these are nice mid-range jackets that deliver good value. I’ll update in a few months with a durability update. As it stands, I like both jackets and feel comfortable recommending them.