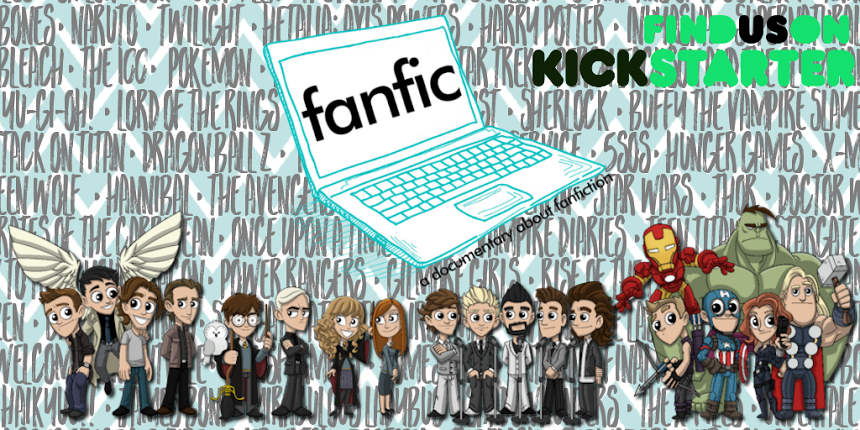 There’s a fanfiction documentary in the works and it just launched a Kickstarter!

The world of fanfiction is often misunderstood by mainstream audiences and tends to get marginalized as a ‘weird’ obscure hobby.  What a lot of people miss is the deep impact transformative works has on both the creators and audience, as well as the strong and tight-knit communities that spring up around this hobby.  The new fanfiction documentary looks to explore the details of our subculture in a way that’s both accessible to people who have never heard of it and those of us who are deep in fandom culture already.

Fanfic: The Documentary is aiming to raise CA$10,000 (USD$7,414) for production costs and is already well on their way to that goal with USD$1,137 with 25 backers in the first three days.  The crowdfunding campaign includes many reasonably priced perks with awesome benefits, including stickers, film credits, buttons, and even a digital download of the film upon completion.  Their budget is broken down incredibly well with detailed costs and exciting stretch goals.

The team’s level of detail with their budget and understanding of our community made me incredibly excited to chat with them about the project.  I spoke with Alice Huzar, the director and producer of the project and founder of Caterpillar Documentary Films.

You mention you discovered fanfiction over 3 years ago.  What fandom pulled you in?

I read Fangirl by Rainbow Rowell, which [has a] main character [who] writes fanfic, and that was really the first time I’d encountered fanfiction. That got me reading fanfic, just to satisfy my curiosity as to what it was all about and try to figure out what people saw in it. Harry Potter was the first fandom that I really got hooked by. I loved all the different takes on what happened to the characters after the novel’s end. That led down a spiral of fanfic and now there are tons of fandoms that I really love reading about.

It seems like you have a great team of people assembled for this project.  Is this your first full length documentary?  What type of work have you produced before?

This is my first feature documentary! Before this, my work has been in television. I worked in the UK for years, and made a lot of different shows for British television. I’ve made behind the scenes shows (for The Big Bang Theory and How I Met Your Mother, among lots of others), produced red carpet specials, music specials, mixed martial arts events, exercise videos, observational documentaries, reality shows and lots more. For fandom cred, I have met Benedict Cumberbatch on a red carpet although my favorite is probably Idris Elba, who is every bit as dreamy as you think he would be.

Over the course of production of the fanfiction documentary, what’s been the most surprising thing you discovered about the world of fanfiction?

I think what I’ve been most surprised by is the sheer number of fandoms that there is fanfic about. When I tell people about fanfic they tend not to believe me when I tell them that there’s literally fanfic about anything, so I like to challenge them. That’s how I stumbled across a Murder She Wrote/Captain America crossover (A Murder In Maine by tomato_greens, which is a WIP), which I find just incredibly delightful. The fact that someone thought of merging those two is absolutely amazing to me. Where can you find that? Only fanfic.

How wide of a release are you hoping for this film?

We do plan for a theatrical release, but it will be a small one.  We’re planning on a streaming worldwide release, with the hopes that it will be available everywhere. We also plan to bring the film to conventions.

Will your fanfiction documentary be aimed at people already in the fan works community or for people who are curious about our subculture?  Or will it be accessible to both types of audiences?

Ack! There are too many to choose. For fandoms, I love Marvel fics, especially Captain America (I heart Bucky). Supernatural, Teen Wolf and Sherlock on the TV side. Oh, and Harry Potter, of course. And on the much more obscure side, I really love Arthur/Eames Inception fics. I tend to read a pretty even split of canon-verse fics and AU’s. I do really love future fics, in every fandom I read. I’m also a sucker for “damaged people becoming less damaged together” fics.

The Kickstarter for the Fanfiction Documentary ends on December 16th, 2016.  Check it out before it’s too late!