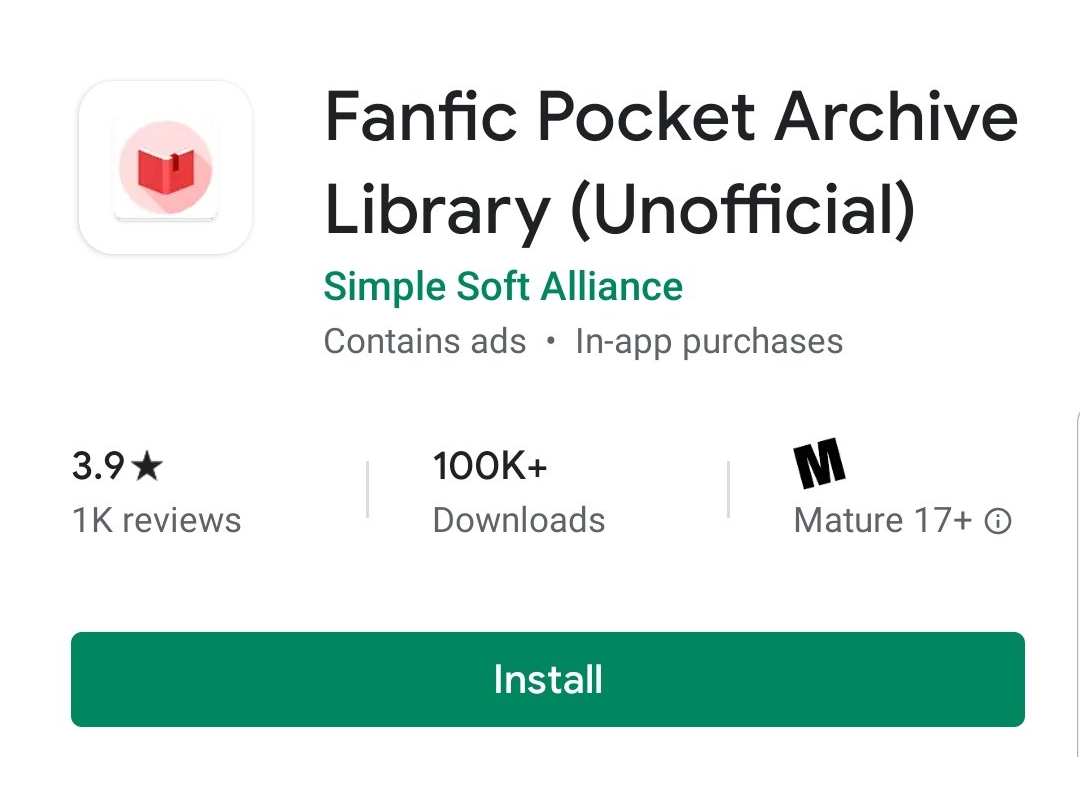 An unofficial AO3 reading app is under fire by fans for offering paid subscriptions and running ads, thus presumably making a profit off of free fanworks.

The unofficial AO3 reading app, called Fanfic Pocket Archive Libary, recently came to the attention of fandom at large because of a tweet by @lexical_dreamer.  The Twitter user points out that their work has been taken from AO3 and posted on an app that offers paid subscription services and runs ads for non-paid users. The app appears to be more of a feeder app than a reposting or mirroring app, but the concept hasn’t sat well with many fic creators who feel their hard work is being used to line someone else’s pockets.

Fanfic creators immediately alerted AO3, who reiterated that they don’t have an official AO3 reader app, but that it’s up to the individual content creators to report the DMCA takedown request to the app stores.  This puts the onus on fanfic creators to file a DMCA complaint, which can feel like a difficult task since transformative works have in and of themselves been the target of copyright complaints. And, ironically, this is one of the things the Organization for Transformative Works has worked to protect. But, transformative works or not, these fanworks were created by us and thus we technically hold the copyright.

⬇️⬇️⬇️ per ao3 – as the copyright holders of our works, it is on us to file DMCA takedown notices against these apps

It should be noted that this is a legal form, so your real name will be associated with the copyright infringement you are reporting. As someone who has some rather embarrassing fic up myself, I know that’s a bit of a horrifying prospect. Nevertheless, I bit the bullet and submitted it. I’m not sure what will come of this, but it’s worth it to me to try.

It’s important to note that apps cost money to make and maintain, which should definitely be acknowledged here. Had some enterprising app creator created a GoFundMe to create an ad-free app for readers, the reaction may have been quite different. The desire to have an official AO3 reader app has been going around fandom for many years, but it just hasn’t quite happened yet. The transparency of a GoFundMe with clear financial goals and accountability to the community would have likely gone pretty well.

The problem with this app is that nobody in fandom seems to know who this app creator is within the community, so finding an exact breakdown of cost has been nearly impossible. As they have over 100,000 downloads, it can generally be assumed they are making more money off the app than it would take to maintain it, even just off ads alone.

If this assumption is incorrect, the creators of the app don’t seem too eager to engage on the topic and clear it up. The app creator’s response to the debacle has left much to be desired.

“AO3 is maintained by volunteers who do this shit for free without asking for anything in return, so since they are clearly unconcerned about the profit, any money generated from this app will go to me instead. Thank you for understanding.” 😒 pic.twitter.com/ZI6r4bEPaP

The legality of the situation is sketchy, as noted by the initial response from AO3. As they are marketing the ads and subscription as revenue to maintain the app, they’ve put themselves in an ambiguous gray area on that front. Because of this, it’s not really actionable by AO3 themselves. But at the very least it’s morally wrong to profit in such a manner. The difference between legality and morality is an important distinction here.

Fanfic creators put their work online for free, with the intention that others can read it for free. While some writers do commissions, this is strictly forbidden on AO3 where this app is pulling data from, so it doesn’t equal into this equation.

So, essentially this third party has stepped in and put a price tag on accessing our work without putting in the work on the content itself. They are basically charging to bring the service to you and pocketing the extra cash above maintenance costs and this doesn’t sit right with content creators.

Some readers have noted that private fanfic doesn’t appear on the app, but this observation has recently been called into question. Some readers have encouraged writers to pull their work from AO3 entirely, but this is a solution I don’t agree with. AO3 is an incredible resource and it’s not their fault that a third-party app has stepped in to profit off their users in such a way. So, where does that leave us in regards to protecting our work?

The best solutions for fanfic writers at this time appear to be reporting the copyright infringements to the app stores, as noted above, and leaving a negative review if you are so inclined to do so. This keeps our content on AO3 but pushes the app stores to take action against the infringing app, or at the very least lowers the apps visibility in the store itself due to the negative reviews.

So, what about fanfic readers who want to read fic on the go?  Those who want to read fanfic on their phones or tablets may struggle to do so without an app, but AO3 has frequently introduced new ways to make this easier for readers. Their FAQ has an entire section devoted to how to download content to your device for reading later. They have options to download in MOBI, EPUB, HTML, or PDF, which covers most of the ways one would want to read content on a mobile device.

Additionally, their website itself is fairly responsive on mobile devices and you can customize your own skins to make reading easier. I admit that sometimes reading on the website itself isn’t the best (including how images can often make scrolling a pain and browser auto-refreshing can make you lose your place), but it’s still fairly good comparatively. The only fanfiction delivery system that I’ve found works better on mobile is Wattpad as that’s specifically geared towards mobile users.

Whether the efforts to remove the app or reduce its user base will have any effect remains to be seen, but at least people are aware of it now. At least, that’s something.