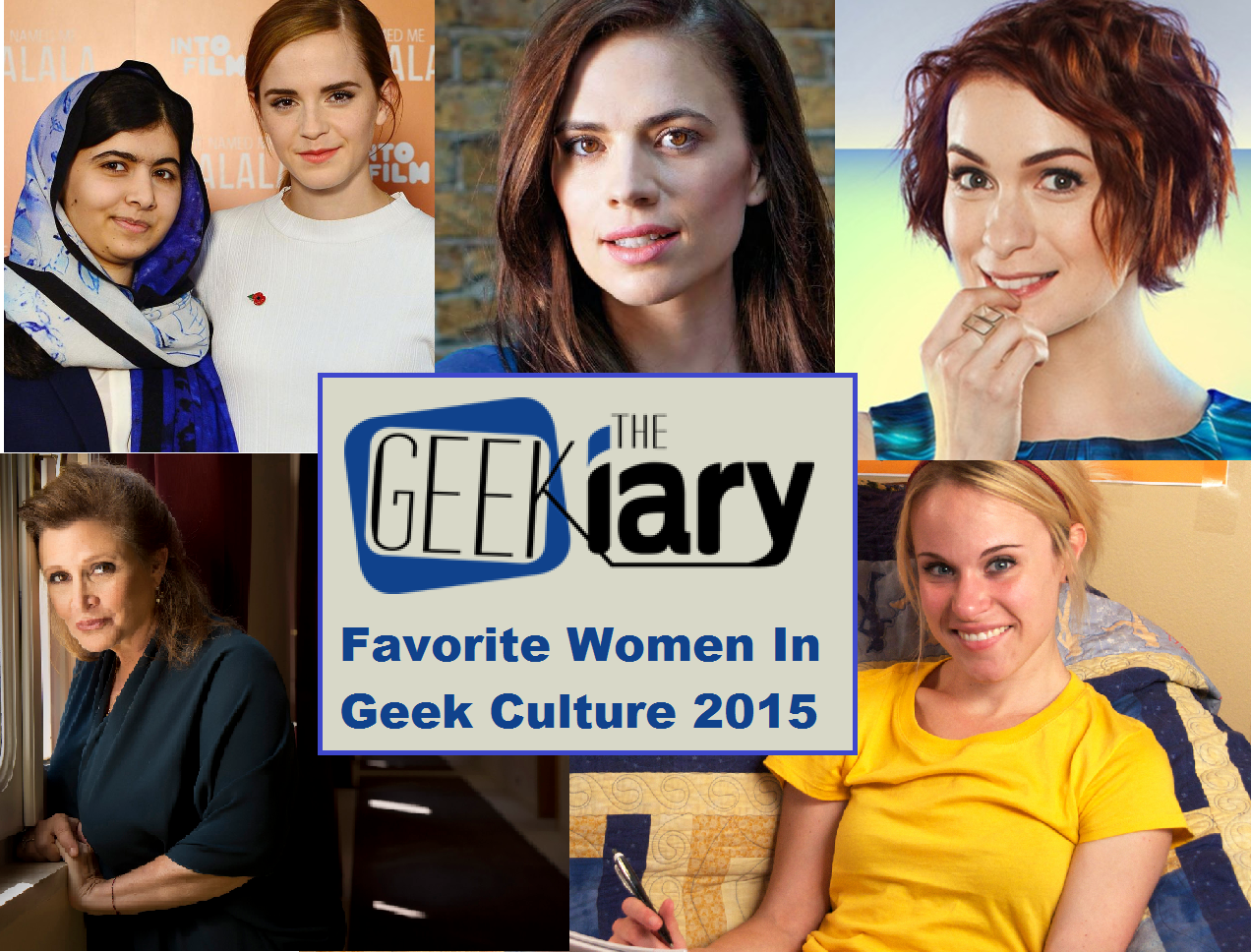 The year 2015 has been an amazing one for women in geek culture.  We have a ton of favorite female characters that were worth noting, which can be found in our Favorite Female Characters of 2015 post, but we have many non-fiction women in geek culture that we want to highlight as well.  There were many actresses, creators, and activists worth noting this year and these are just a few of our favorites

Emma Watson has come a long way since playing Hermione Granger in the Harry Potter films. The character she played was, in and of itself, an outstanding female role model, but the actress has pressed on after the films ended to stand up for women’s causes on a global stage. In 2014 she was appointed as the UN Women Goodwill Ambassador and started the HeForShe campaign. This year she sat down with Malala Yousafzai, the women’s education activist from Pakistan who gained international attention when the Taliban attempted to assassinate her on her way to school. Turns out Emma Watson hasn’t been an inspiration just to us geeky girls who grew up influenced by Hermione. Her position in the UN and her willingness to use her platform to further gender equality touched Malala, who is one of the most influential women in the world right now. Thanks to Emma Watson, Malala put a lot of thought into the term “feminism” and now embraces the title. Malala continues to fight for gender equality and rights for women to pursue an education on a global scale.

Malala Yousafzai and Emma Watson created a powerful moment with that one interview, and I hope we see more from the both of them on the global stage in the fight for gender equality.  They have both made a huge impact and have inspired each other in a beautiful way. 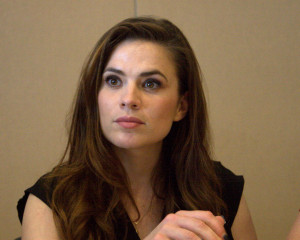 A breath of fresh air that catapulted into our lives back in 2011 as Peggy Carter in Captain America: The First Avenger, Hayley Atwell reached peak awesome in 2015. The year kicked off with ABC’s series Marvel’s Agent Carter, which followed Peggy’s exploits in post-WWII New York. Also, she was a light in the dark mess that was Avengers: Age of Ultron, and she almost made Ant-Man worth watching. Without a doubt, her greatest achievement of 2015 was the epic dubsmash battle she engaged in with the stars of Marvel’s Agents of S.H.I.E.L.D. She lip synced her way into everyone’s hearts and totally wiped Coulson and Daisy off the map when she got Chris Evans to join the fun. Since then she has sadly decided to shut down her social media accounts, but we still get a glimpse of her antics through her castmates so all is not lost. She may never be our Instagram darling again but we will always remember the 2015 as the year Hayley Atwell ruled the world.

That’s right.  I’m nominating almost 70,000 people right now.  But look, they totally deserve it.  The turn out at San Diego Comic-Con was split down the middle when it came to men and women (though the survey didn’t take other genders into account).  While many of us have known that we’re totally here in geek culture and have been aware of that for years, the demographics of San Diego Comic-Con turned a lot of heads.  In fact, many people took this as a sign that there is finally gender parity in the geek community.

“In the industry and culture as a whole, a revolution is clearly under way,” [says Scott] McCloud (author of the cartooning bible Understanding Comicsand the new graphic novel The Sculptor), who was a featured guest at this year’s Comic-Con.

“We polled across multiple fandoms, ranging from comics to gaming to anime to ‘comic- and genre-based media’, and we found gender parity at the top line,” says [Rob] Salkowitz, who is the author of Comic-Con and the Business of Pop Culture. “That is, our sample was split almost exactly 50/50, compared to last year, when it was 54/46 male.”

We’re here, guys.  And we have been for a while, really, but it’s great that you finally noticed us.  If we were going to be noticed, I’m glad it was nearly 70,000 of us spending a long weekend in San Diego geeking out together.  Let’s do it again next year, shall we? 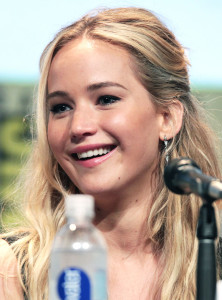 In 2015, one of the highest-paid celebrities, Jennifer Lawrence, decided to use her notoriety to write an op-ed regarding gender inequality in wages. This was incredibly important and came at the right time in her career; she is just getting done playing the role of Katniss Everdeen in the Hunger Games franchise. She got a lot of flack, but frankly pay inequality is something that all women have to deal with, and to have a well-liked, successful, young woman bring it to the forefront took a lot of guts, especially since it may cost her roles in the future (let’s hope not!). I think it is particularly poignant and brave that she pointed out that she was not doing it because it is a “trending” topic, but something that she feels passionately about because it should be a no-brainer. And for that, we commend you!

Carrie Fisher came back as Leia Organa in Star Wars: The Force Awakens, but it was her interviews before the film that really caught my eye. During an interview with Good Housekeeping, she spoke about the struggles actresses have to face in Hollywood: “I’m in a business where the only thing that matters is weight and appearance. That is so messed up. They might as well say get younger, because that’s how easy it is.”

Add her interviews to the fact that Leia is now known as ‘General Organa,’ instead of ‘Princess Leia,’ and the fact that the protagonist of the new film is a young woman, and you’ve got a pretty female positive vibe surrounding the new Star Wars franchise. Carrie Fisher is badass both on and off the screen and I’m excited to see what she does in the next few years as the trilogy releases their other installments.

Hilly and Hannah Hindi of The Hillywood Show 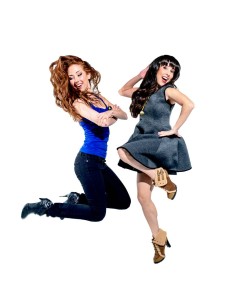 Hilly and Hannah have been around for a while, but their Supernatural parody video became incredibly popular extremely quickly.  The girls have been embraced by Supernatural fandom and became the top earners on Patreon.  These two women are incredibly talented independent creators and have rallied a large, mostly female, fanbase together in the name of parody comedy videos.  While Hollywood may continue to be male-dominated and cater to a male audience more often than not, these two women have proven that independent creators, women, and people who create content that appeals to a female fanbase can be successful.  Rock on, you two.  I’m excited to see what you produce in 2016.

Felicia Day, Geek Goddess Extraordinaire, has had a pretty awesome year. Yes, unfortunately her character on Supernatural met a brutal end (still not over this, and I never will be), but she did have a guest spot on Nathan Fillion’s show Con Man and continued to grow her company, Geek & Sundry, throughout 2015. On top of that, she also published her book You’re Never Weird on the Internet (Almost). She’s a powerful role model for self identified geeky women and consistently helps foster a more welcoming environment for everyone to geek out in regardless of gender.  Geek culture just wouldn’t be the same without her.

Allie Brosh runs the infamous blog Hyperbole and a Half, but she tends to disappear off the map for months or more at a time (completely understandable)…so imagine my surprise when I saw that she was hosting a panel at SDCC this past summer! She will be releasing her second book, Solutions and Other Problems, late next year, and listening to her and Felicia Day chat about that, her blog, and her life in general for 45 minutes was the highlight of Comic-Con for me this year. Allie is clearly a geek at heart, and she’s also a funny, wonderful, kind, brave woman, and her openness about her battle with depression has touched so many lives – including my own.

It’s been an amazing year for Gillian Anderson.  First, she comes back to reprise her role as Doctor Bedelia de Maurier on Hannibal.  Second, she’s been in the press repeatedly for the upcoming X-Files revival.  In general, Anderson is an all around incredible feminist, using her popularity as Doctor du Maurier to raise money for women’s causes and supporting Comic Relief’s Women at the Well charity.  And that’s just for the year 2015 and just for women’s rights causes.  She also supports tribal rights and animal rights, among others, and has been using her celebrity status to support causes for many years.  No doubt we’ll be seeing a lot more of her as we head into 2016.

These are just our favorites.  We know we’ve missed many incredible women who’ve impacted geek culture in 2015.  Who are some of your favorites?