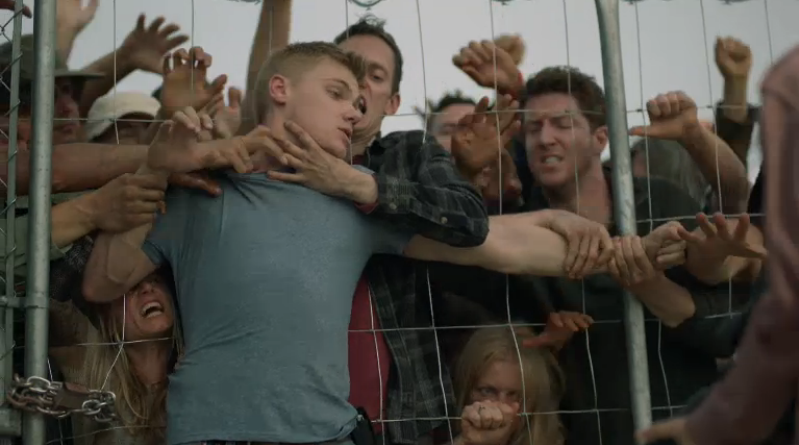 This week’s episode of Aftermath brought the Copeland family together in ‘Fever of the Bone’, but not before making them face yet another threat.

I can’t understand why I didn’t know about Aftermath earlier. It follows the Copeland family as they try to survive what looks like the end of the world. Now, you might be thinking that Aftermath is the same any other apocalyptic sci-fi show. I thought that, too. But the show proved me wrong in the first few minutes.

Not only does the Copeland family have to deal with falling meteors, solar flares, and disastrous weather, they also have to face a deadly plague, skin-eating parasites, water goblins, skin walkers, and even dragons!

Aftermath is a weird mix of sci-fi, supernatural, and fantasy. That is why I’m looking forward to what the Copelands will have to face next while trying to maintain a weird sense of humor about everything.

Coming to ‘Fever of the Bone’, we see Brianna Copeland (Taylor Hickson) waiting for the Reverend Father to come meet her. Brianna is definitely one of my favorite characters from the show. She got separated from her family in the premiere. However, she hasn’t given up hope and continues to keep moving. Even when she was locked inside a barn, instead of waiting around to be rescued, she used the resources she had to try and escape. Her plans might not always work, but as far as I’m concerned the teenager gets full points for effort. 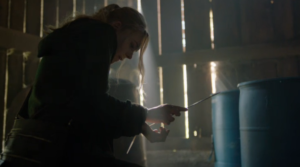 ‘Fever of the Bone’ revealed that a skin walker was after Brianna. It even called her the killer of hosts. I’m looking forward to seeing how she’ll deal with the threat because even though she defeated the latest host, I do think that it ended up possessing Devyn in the process.

Speaking of Devyn, I’m not sure what to make of the 15-year-old. He has definitely fallen for Brianna but I need him to be more than just a love-struck puppy. Hopefully, he’ll come into his own as the season progresses and if he gets to survive.

The show also seems to be hinting at a connection between Brianna and a dragon. Maybe the dragon will help Brianna defeat the skin walker that is after her? Let’s see. I’ve learned to expect all kinds of weirdness from Aftermath.

As for the rest of the Copeland family, I liked the little interaction between Matt (Levi Meaden) and Dana (Julia Sarah Stone) about who they would eat first if they ran out of food. It was the kind of dark humor that works well for this show.

Compared to Brianna’s story, the rest of her family didn’t get much as far as character development is concerned. They fixed their R.V., dealt with some flesh-eating worms, and ran away from fever heads. However, we did get to learn that the reason Dana never used a gun had to do with her loving life and not being open to changing herself. She wanted to stay the same because it helped her deal with the apocalypse they were facing. The scene where she shared her feelings with Matt made for an interesting moment, but Dana will have to learn how to defend herself soon.

All in all, ‘Fever of the Bone’ was another fun episode of Aftermath. It is the kind of series that keeps getting better with each consecutive episode. I hope the series starts answering a lot of questions soon. I really want to know the wish Matt made when the water goblin told him he could have anything he desired. Also, I want to know more about Joshua Copeland’s father who seems to know a lot about mythical creatures. Furthermore, is the show dropping subtle hints that Matt is queer or am I mistaken?

Aftermath has been created by William Laurin and Glenn Davis. It airs every Tuesday in the U.S. on Syfy and in Canada on Space at 10/9c. The first season consists of 10 episodes. It stars James Tupper and Anne Heche as the married couple, Joshua and Karen Copeland. I urge you to catch up if you haven’t watched this show yet.

Quote of the Week: “The apocalypse sucks for pizza.” – Dana to Matt.

Do you watch Aftermath? What did you think of ‘Fever of the Bone’? Let us know.

7 thoughts on “Aftermath 1×4 Review: Fever of the Bone”