Cassie Tam Files #2 “The Fox, The Dog, and The King” by Matt Doyle – Book Review 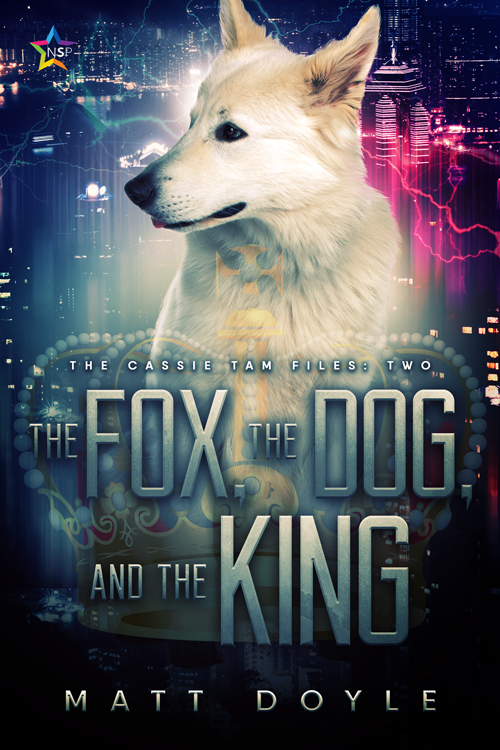 The Fox, The Dog and The King by author Matt Doyle is the second book in the Cassie Tam Files series. It continues Cassie’s adventures in New Hopeland as a PI. This time her search for a missing dog leads to some dangerous stuff.

I was provided a free copy of The Fox, The Dog and The King by the author for review. The opinions are my own.

I have already reviewed the first book (titled Addict) in this series. So, I knew about Cassie as a character as well as understood her relationship with Lori. However, having said that, it isn’t necessary for you to have read Addict to enjoy The Fox, The Dog and The King by author Matt Doyle. He is able to convey his story in a manner that makes it easy for new readers to jump right into the series.

New Hopeland City may have been built to be the centerpiece of the technological age, but some remnants of the old world still linger. The tools of the trade have changed, but the corruption remains the same, even in the criminal underworld …

When PI Cassie Tam and her girlfriend Lori try to make up for their recent busy schedules with a night out at the theatre to watch the Tech Shift performer Kitsune, the last thing they expected was for Cassie to get a job offer. But some people are never off the clock, and by the end of the evening, Cassie has been drawn into a mundane but highly paid missing pet case. Unfortunately, in New Hopeland City, even something as simple as little lost dog can lead you down some dark paths.

Until now, Cassie wasn’t aware that there even was a rabbit hole, let alone how far down it goes.

The second book picks up some months after the events of Addict. Cassie is able to handle a few cases while spending time with Lori. But things change when Lori takes Cassie to watch Kitsune’s performance. I liked the mysteriousness surrounding Kitsune. Doyle did a good job of fleshing out the performer as a new character as well as explain all of the technology that went into their performance.

After Cassie takes on the case to find Kitsune’s missing dog, she soon finds herself in the middle of a dangerous game occurring in the city’s underground.

The story is from Cassie’s perspective so you get to learn a lot about her. I liked how she has insecurities that make her feel relatable. Juggling your work and personal life can be tough, and it was nice to see Cassie going through emotions similar to a lot of us. I also felt Doyle spent a lot of time exploring Cassie as a character. I think this was because he had already done a lot of worldbuilding in Addict and in the sequel he had more time to focus on the lead and other characters.

The story has a good pace with a lot of action and tense sequences to not keep the energy levels high. Even when Cassie is resting a bit at home and talking to Bert (her familiar), you know things aren’t going to remain calm for long.

The end of the book has information about the Tech Shift Gear Welcome Pack which is something you should definitely consider reading. It is very impressive to see how much time Doyle has spent on his work. Also, the series will continue. So, readers will get to see Doyle explore more aspects of his characters as well give more life to the world he has created.

The Fox, The Dog and The King by Matt Doyle (from NineStar Press) is currently available for purchase.