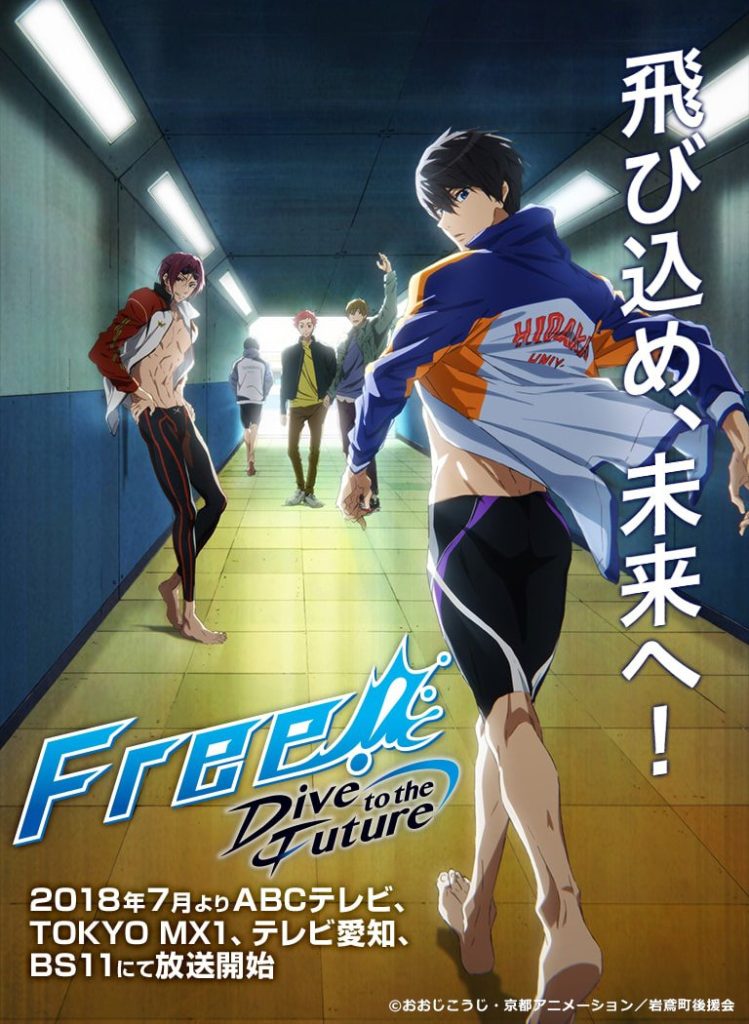 Two weeks ago, we got a flurry of promotional material for the upcoming season 3 of Free!, Dive to the Future. Some fans worried because we were missing quite a few characters. But over the past couple of weeks, more Free character cards have been revealed!

After the surprise announcement at the end of the event for Free! Take Your Marks, we languished for several months without any real information about the new seasons, other than we could expect it sometime this summer. But we finally learned that Free! Dive to the Future will premiere in July. The new teaser trailer and accompanying Free character cards only featured Haruka, Makoto, Rin, Asahi, and Ikuya, leaving fans wondering if we wouldn’t be seeing Nagisa and Rei in the new season.

For a while, it certainly seemed as though Nagisa and Rei would be left behind in Iwatobi while we followed Haruka and Makoto on their college adventures in Tokyo. But since the trailer dropped, the official Free Twitter has been slowly releasing more character visuals. Aside from the five already released, we now have Free character cards for Nagisa, Rei, Sosuke, Natusya, Nao, and Hiyori (Ikuya’s friend from Take Your Marks).

These images seem to confirm that we’ll be visiting Iwatobi in Free! Dive to the Future. Take Your Marks had a storyline featuring Rei and Nagisa’s quest for new members for the swim club, but if you remember the end cards from the last episode of Free! Eternal Summer, they do find a few. It’ll be nice to check in on them in between what is sure to be some great drama with Haru and everyone.

Meanwhile, we know from Take Your Marks that Sosuke isn’t quite ready to give up competitive swimming, helped along a bit by some advice from Natsuya, who fondly talked about his friend Nao, who had an eye injury. And Nao, in a delightful twist, ends up being the previous tenant of the apartment Haru ends up renting in Tokyo.

These visuals go a long way in soothing my fears that we wouldn’t see anyone else in Free season 3. I’m more excited than ever for the new season!