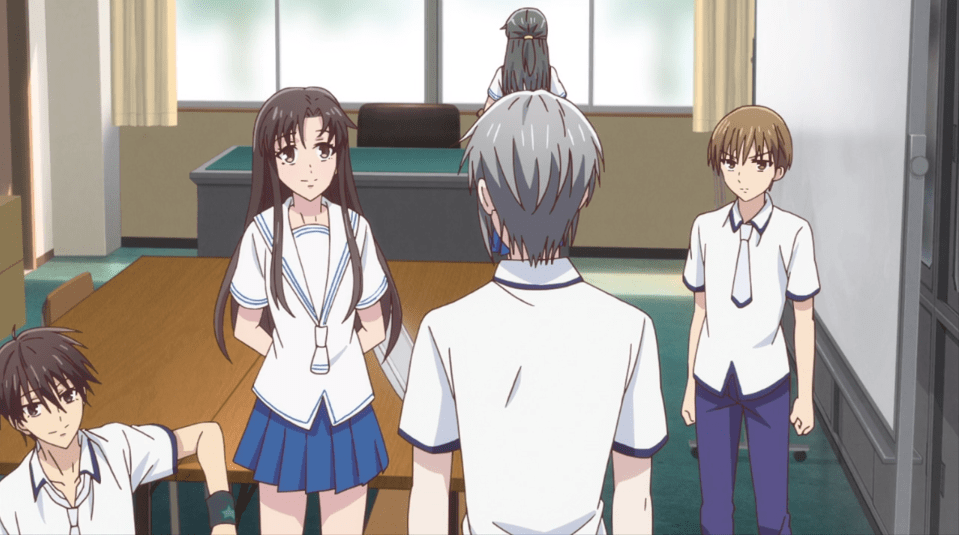 There is a lot going on in Fruits Basket now that Tohru and the Somas have returned to school. And while “Sure Thing” and “I Should Just Die” are focused mostly on Yuki, both episodes provide some great introspection on some of the side characters, including Haru, Rin, and the newly-reintroduced Kakeru.

Unlike “I Should Just Die”, which had an evenly-distributed mix of storylines to follow, “Sure Thing” was almost entirely Yuki-centric, with Tohru, Kyo, and the others appearing only briefly. What “Sure Thing” did was to fully introduce the new Student Council after we got to meet Kakeru and Machi at the beginning of the season. The members of the Student Council will become increasingly important relationships for Yuki, so establishing the dynamic is a good thing.

It is absolutely vital that Yuki, who has lived a relatively sheltered and isolated life, make friends and build relationships outside of the Soma family. Tohru and her limitless kindness was the catalyst, but Kakeru really helped him unleash all of his pent-up frustrations in this episode by being a complete jerk. (Side note: Nobunaga Shimazaki was incredible during the fight scene. He tends to play a lot of stoic characters, so it’s really great to hear him just let go.)

Yuki and Kakeru are essentially polar opposites, a fact that Yuki himself notices when he compares Kakeru to both Ayame and Kyo. Kakeru says whatever ridiculous thing pops into his head and comes out guns blazing without thinking of the consequences. Yuki, on the other hand, is constantly filtering himself, even sometimes in his own head. A lot of that is due to his upbringing, and he knows it, which is why he finally confronts Kakeru on the fact that he is judging people’s character by how visibly happy they are. 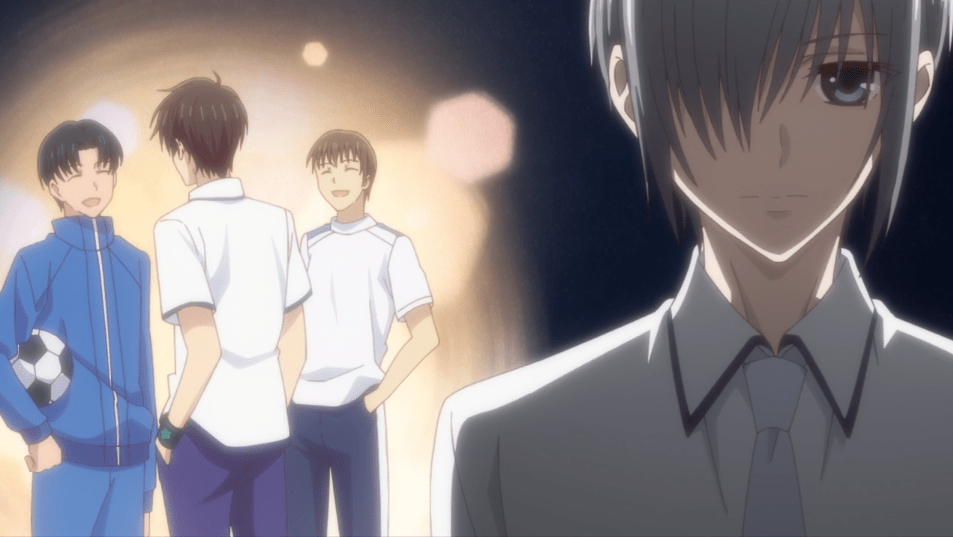 Also, how could anyone think Kyo is happy? That boy is like anger made flesh.

This episode really delves into Yuki’s psychology, showing him as standing apart from everyone, highlighting how difficult it was for him to speak to the Student Council, revealing that regardless of the fact that everyone seems to adore him, he feels inferior to them. He is a deeply troubled boy working through a lot of trauma, and this episode emphasizes that quite well with the blue filter and the shots of him in the shadows.

“Sure Thing” also introduces a darker side to Kakeru. It’s hinted at earlier in the season, in the way that he treats Yuki, and you get a glimpse of it in this episode, when we notice him watching Tohru and Kyo leave school. He uses that to taunt Yuki, and then when Yuki stands up for himself, Kakeru fights back. Then he reveals that he is jealous of Yuki, because Yuki has the ability to read people and understand what they need.

That moment really stood out to me. “Where should I look from so that I can see the same things as you?” That’s a level of maturity you wouldn’t expect from a high school student – the notion that every once in a while, you need to pause and reexamine your thought process. It’s important to try and look at things from someone else’s perspective; that’s how you build connections.

Speaking of connections, “I Should Just Die” is all about them – romantic, familial, platonic. There is a lot of focus on Yuki again in this episode, but in this case, he is mostly the middle-man for others – particularly Haru and Rin. There are some small moments, though – him working up the courage to visit his parents only for his mother to not be there, him claiming that he hasn’t done enough to pay back others’ kindness – that continue the introspection from last week’s episode.

Aside from the Yuki interludes, this week’s episode has two main plots: Haru/Rin and Tohru and her grandfather (with a side of Kyo).

Thanks to Rin’s conversation with Yuki, we can infer that whatever caused her to break up with Haru is probably about her protecting him – likely from Akito. I can’t remember if it’s been confirmed that Akito is the one who put Rin in the hospital, but considering what Akito has done to both Hatori and Kisa, it’s a reasonable assumption to make. Akito is possessive of the Zodiac, and I’d wager dollars to donuts that Rin and Haru’s relationship was discovered somehow and Rin is taking the brunt of the punishment.

Don’t think I didn’t notice that scar, either.

“I Should Just Die” offers us peak Haru on a silver platter. Not only does he have some choice one-liners throughout the episode, but he also has his suave moment of pulling Rin into a passionate kiss. 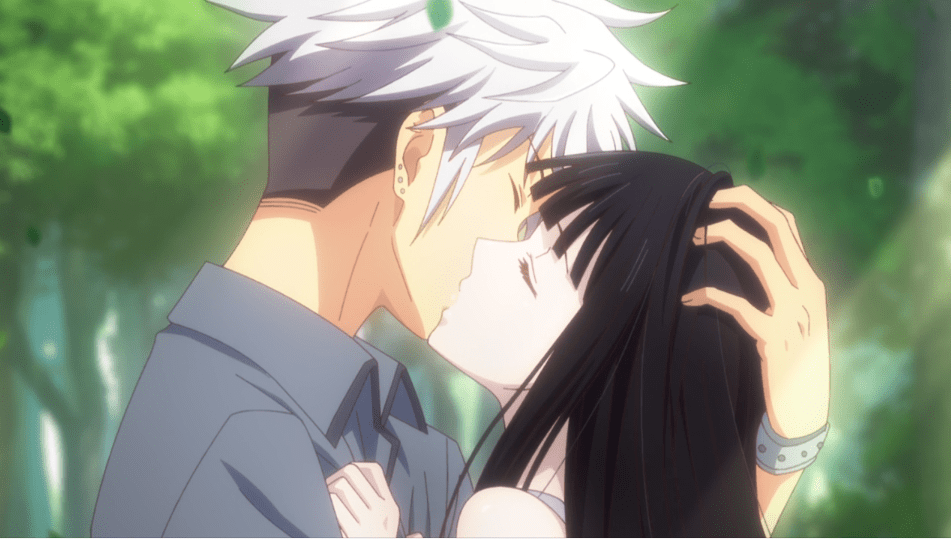 But also, you can see how much he cares about Yuki. This was an ongoing joke in season 1, but as Yuki comes to realize the depths of Haru’s affection, the audience is exposed to it as well. Knowing that Haru used to visit Yuki even though it was forbidden, and that Haru is at least partially responsible for Shigure taking Yuki in, are a one-two gut punch.

It can also hearken back to “Sure Thing” and Yuki’s feelings of loneliness and inferiority. He looks at other people and sees himself as less-than, and here Haru is and has been going above and beyond to help him.

Still, I don’t want to take away how important “I Should Just Die” is for Haru. He starts the episode resigned to the fact that Rin has broken up with him because she wanted to, but by the end, he realizes that she still has feelings for him despite what she says. Not to mention, he acted rationally and maturely and is handling everything extremely well.

Shigure: “How nice to be young like you guys. Clumsily living your lives. Struggling so hard to stay afloat, though you’d float if you just relaxed.”

Haru: “Isn’t that the life you get after you’ve struggled with everything you’ve got?”

Shigure: “I like that. Then, go ahead and struggle, Haru-kun. Don’t relax just yet, Haru-kun. Keep trying and struggling. Isn’t that your job as the young folk?”

“I Should Just Die” reminds us that Tohru has a grandfather by having him get injured. It’s been a while since I cried at Fruits Basket, but the scene where she was visiting her grandfather and he was talking about getting to see Tohru’s parents one more time had me bawling. (I’m tearing up right now just writing about it.)

Tohru is so cheerful that I sometimes forget her mother died very recently and that she is still likely processing the loss. Her grandfather’s words triggered a memory of something that happened after her father died. Overwhelmed by emotion, she collapses in the street. Luckily Kyo’s there to help her up and check on her.

Kyo is going through something as well, as evidenced by his distance from everyone in this episode. (It’s weird that this is something emphasized in “I Should Just Die” and is explained as being after his conversation with Kagura a couple of episodes ago when in the previous episode, Kyo was behaving relatively normally.) My theory is that Kyo is still coming to terms with his feelings for Tohru and reconciling them with the knowledge that he doesn’t have a lot of time left with her.

Kyo and Tohru make my heart hurt. I love the two of them so much. They have so many little moments that just make me smile, and Kyo changing his mind and going to check on Tohru was so sweet.

I love the new OP and ED, especially the ED. The visuals in the ED are just spectacular.

Have you seen “Sure Thing” and “I Should Just Die”? What did you think? 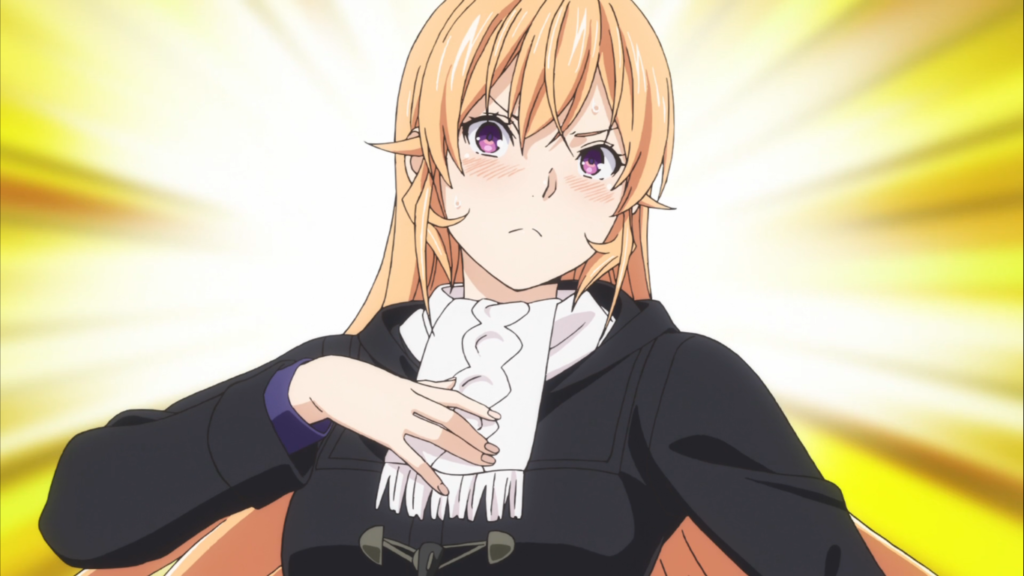 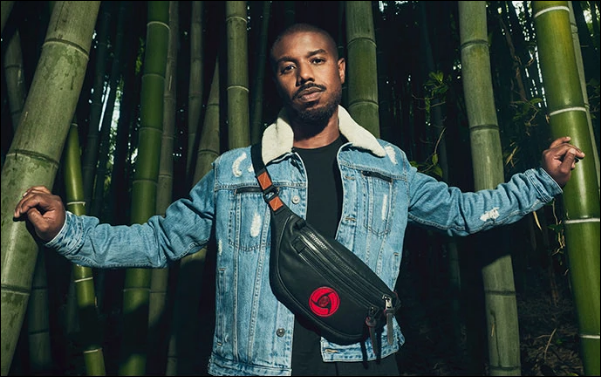 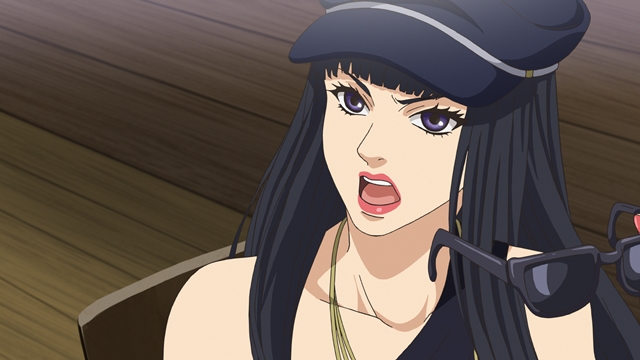